When Stefanie Weldon first entered the Edmund A. Walsh School of Foreign Service at Georgetown University in 1968, she was shocked. The atmosphere there screamed wealth and privilege, something Weldon was not used to. Yet she soon found a kindred spirit in a gentleman from Arkansas who came from a similar background. Twenty-five years later, her friend William Clinton was sworn in as the 42nd President of the United States. 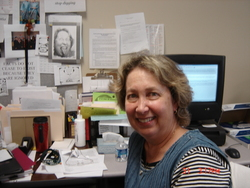 Since Weldon attended Blair during its "golden age," former President Clinton is not her only famous acquaintance. Weldon graduated in 1964 alongside Connie Chung and just after Goldie Hawn, Carl Bernstein and Ben Stein.

Reminiscing back to her high school days, Weldon remembers the discrimination females faced. Though Weldon originally wanted to become an aeronautical engineer, she was "flat out told girls don't do that." Weldon then set her ambitions on attending the Georgetown School of Foreign Services but faced discrimination again when the Assistant Dean of Admissions told Weldon that she should try out for the School of Nursing because Georgetown did not "want to waste [their] Foreign Service degrees on women." Forty years later, Weldon recalls those exact words with sadness in her voice.

Despite all these roadblocks, Weldon was determined to succeed. After graduating from law school, Weldon became an attorney for the government and specialized in government contracts, labor laws, civil rights, health laws and Social Security. Weldon briefly entered private practice, but decided she did not like it and returned to the government.

After practicing law for 25 years, Weldon decided to retire and seek a second career because she wanted change. "I was bored; I was tired of being around old people," Weldon laughs, her still youthful face cracking into a smile.

Although Catholic University Law School, where Weldon taught part time, offered her a job, she turned it down because she wanted a community. "I loved the idea of a community, and schools really are communities and law school is not," Weldon explains.
An experience as a guest speaker in her friend's high school government class also influenced her decision, because Weldon wanted to make a change. "It's good to get out and make a change where I still can and what you're doing is going to be new," Weldon says.

After a few years of teaching, Weldon has no regrets. "I loved being a lawyer, I really, really did. But you know, you do something for 25 years, its good to change," Weldon says. "I have never regretted one minute. I think that high school kids are so much fun to be around. I loved my time at Blair, so for me, being back in high school is a kick."

Apart from teaching and practicing law, Weldon loves traveling. Since college, Weldon has been to England, Italy, France, Spain, Switzerland, Israel, Mexico and Canada. This summer, she will travel to Alaska.

Weldon's other passions include music, especially classical music and Mozart. "There's no question, Mozart was the most incredible composer who ever walked the earth," Weldon exclaims. Not one to sit on the sidelines, Weldon also sings, although less and less frequently. "I really enjoy singing …but my voice is just not aging well," Weldon sadly says. "My heart says I'm a soprano, but my voice says I'm an alto."

But teaching and practicing law still hold a special place in Weldon's heart. Weldon loves the law, and teaching the law. "I passionately believe in the law and in government and I want people to take their role as a citizen very seriously and I think that kids understand that, particularly when they see me jumping up and down and screaming in class," she says.