It's afternoon on May 1 in Montgomery County. Teachers and students are resting after another tiring day at school. AP students are preparing for an arduous two weeks of testing. But on the other side of the country in Los Angeles, one teacher—Sarah Manchester of Takoma Park Middle School –is in the middle of filming Wheel of Fortune, dead-focused on her bonus round puzzle. She's already made it past all the other rounds, and has beaten out the other two contestants. She was somehow able to land the wheel on the million dollar wedge and receive the small opportunity to win a million dollars in this round. The puzzle begins. There are two Ls. There's a T, an E and an R. She sees it right away. "Audience, please don't say anything, she must do this on her own. I just have a hunch she's going to because of the sly look on her face,” says the host, Pat Sajak. 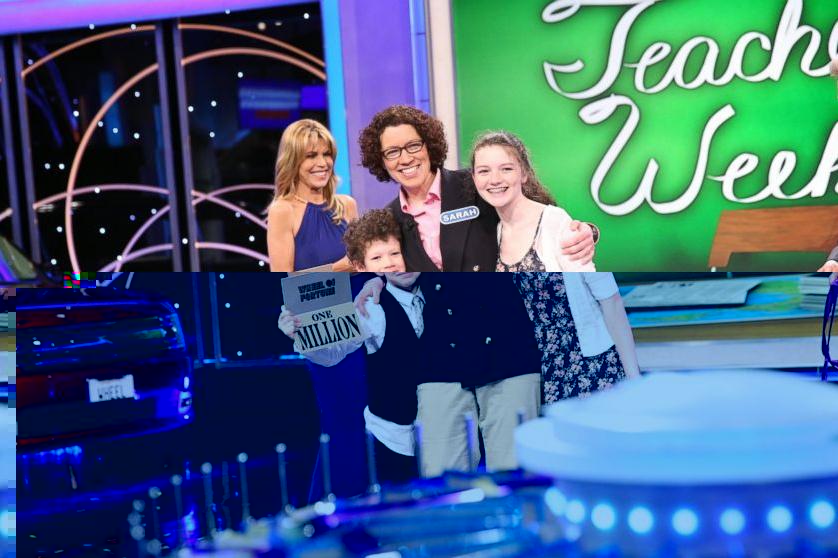 "Loud laughter!” she yells. It's correct. Sajak opens up the bonus round envelope and, lo and behold, it's the million dollar envelope—one of twenty-four. Sarah Manchester has just won a million dollars.

After keeping her winnings a secret for four-and-a-half months, Manchester was finally able to reveal her ecstatic moment when the show aired on September 17. Friends and family, hundreds of current and past students and millions of Wheel of Fortune viewers were struck with amazement. However, her success didn't come without hard work and, of course, luck. "I'm a great puzzle solver but at the end of the day, I was really lucky,” she says.

Manchester may seem like an all-around math person: she is the coach of the math team, she teaches Magnet Geometry and Magnet Algebra II—her license plate even says "MATHGRL." But Manchester also enjoys old ‘80s video games, playing Scrabble and Boggle, doing crossword puzzles and, unsurprisingly, watching Wheel of Fortune. "I've always liked this stuff since I was a kid,” she says. "[My family and I] would watch the evening episodes during dinnertime and see who could solve the puzzle first.”

So when the Wheelmobile came to Northern Virginia last fall, Manchester thought it would be a perfect opportunity to try out for the show. Not wanting to waste an evening, she brought a stack of papers to grade. Her instincts were right: she says that there were way more people than she could imagine. "I didn't think my chances were that good,” she says.

But still, Manchester already had a strategy. "I tried to be different on the application,” she says. "I figured 80% of the people would say 'I like the Redskins' or something, so I wrote about my experiences as a math team coach.” Sure enough, after several months, Manchester received an email saying that she passed her first audition and should come back for a second one. At her second audition, she says that she was much more nervous. It would have been frustrating to come this far and not make it. "They told me that in two weeks, I would receive a letter if I made it, and if I didn't, then oh well,” she says with a shrug. After the two weeks passed, Manchester still hadn't received any mail—her disappointment was short-lived. "I was ready to post on Facebook, 'Sorry guys, I didn't make it.' But the next day, I saw a letter with "Sony Pictures” across the top. I just started jumping around,” she exclaims.

Manchester had to fly to Los Angeles for the taping of the show in early May. Things weren't exactly going her way; she was feeling exhausted and nauseous the day before. She rested the entire day and felt much better, but she already had another problem on her hands, or rather, her face: a zit. "I got this pimple on the side of my mouth and I thought, ‘No, I'm 42 years old and I'm about to go on national television—why do I have this?'” Luckily, there was a makeup artist who Manchester says she is "eternally grateful” for. "She didn't say anything, she just took a little longer around that spot,” she says, laughing.

While worrying about her blemishes, Manchester was also worried that she would somehow embarrass herself on television. "Sometimes people now, with everything on the web, they mispronounce a word in a puzzle and it goes viral and the whole country knows you don't know how to pronounce 'Achilles' and say 'ah-chill-is' or something,” she says. "I thought, ‘God, I really don't want that to be how I am remembered on the show!'” 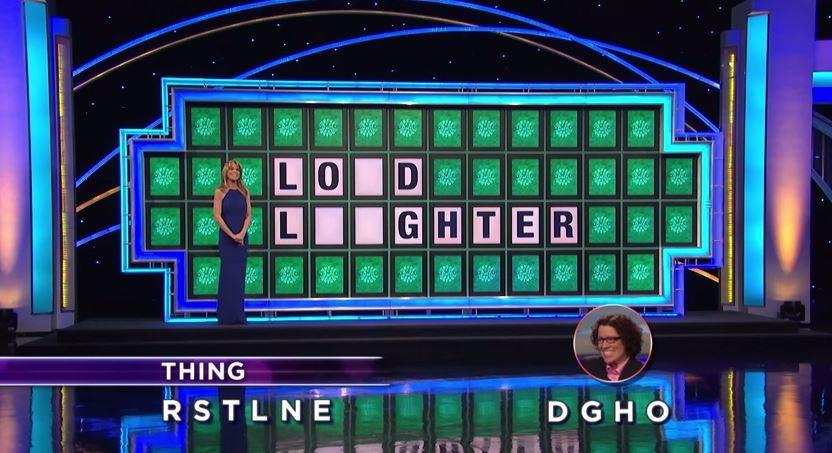 Photo: In the bonus round puzzle, Manchester correctly guessed the letters D, G, H and O since she knew the solution, "Loud Laughter," right away.

Photo: In the bonus round puzzle, Manchester correctly guessed the letters D, G, H and O since she knew the solution, "Loud Laughter," right away.

The day of the filming was very intense, Manchester recalls. She had to undergo vigorous training on how to spin the wheel, how to project her voice and how to keep the pace of the game moving. "The wheel is actually very heavy, so you have to sort of build a technique to put your whole body into it,” she says. After training, Manchester was also able to sit in the studio audience and watch other episodes that were airing that day. "Filming is actually pretty quick, they get about five or six episodes done in a day,” she says. She was surprised that the entire audience would be able to keep the results a secret, since they are legally not supposed to share them until the show airs. "While I was in the audience, there was a group of middle schoolers behind me,” she says. "I thought, ‘gosh, someone must be posting it on Instagram or tweeting it!'”

During taping, Manchester was strangely calm. "It was really weird because I wasn't nervous at all,” she says. Despite a rocky start, Manchester managed to solve several puzzles and win a trip to the Dominican Republic. She ended up in the lead, and found herself going on to the bonus round. "It was really awesome, but the million still didn't seem like a realistic opportunity,” she says.

Can you use a million dollars?

Shocked, astonished, NO WAY—that's how Manchester eloquently describes her reaction to hitting the jackpot. "I was not expecting that at all, absolutely not at all,” she laughs. "It was just so awesome. I loved every moment of it. It was so wonderful and nice to have my family up there celebrating." The sense of a "win," however, did not come immediately, as neither Manchester nor her family were allowed to share the outcome with anyone until over four months later, when the show would air. "It made me think of Schrodinger's cat," she says. "The cat is both alive but not alive, and that's how I felt. I won but I didn't really win...it was weird."

With significant effort, Manchester and her two children, Alden, 8, and Raina, 14, were able to keep the winnings a secret for the entirety of the wait, with one exception. A week before the show aired, Alden inadvertently told his teacher the big news in an essay assignment where he was to write about the happiest day of his life (Manchester believes that she will not suffer any legal repercussions from this, so she is allowing Silver Chips Online to publish this information). Other than that, Manchester and her family's lips were sealed, even with constant nagging from friends and students.

When the episode finally aired, Manchester held a viewing party for friends and family at McGinty's in Silver Spring, where she was finally able to replay her excitement all over again. "It was wonderful, one of the most memorable nights of my life,” she says. "I hope everyone enjoyed it as much as I did.”

Her daughter, Raina Newsome, is a freshman at Blair and was at the party. She says that it was interesting to see how people reacted so differently from each other. "It was really funny because some people were screaming and others were just sitting there like, ‘Oh my god, what's going on?'” she says.

Even though she is equipped with a million dollars, Manchester does not plan on making any extravagant purchases. Instead, she will be using the money for her kids' college tuition, travelling and donating to different charities. Manchester is also taking preventative measures by choosing to receive a little of the money every year for twenty years. "That way, I won't try to make any stupid decisions,” she says. "Also, the tax bracket is lower.”

Nevertheless, some of Manchester's students are still unsure. "One of my students came up to me and said, ‘I heard you got a Porsche!' I don't know where he got that from,” she says. Other students are doubtful that she will continue teaching. Rest assured, though she does have an upcoming video interview for the Queen Latifah Show, she has no plans of leaving Takoma. "I love teaching,” she says. "I'll still be here, teaching at Takoma Park Middle School, coaching the math team.”

Looking back, Manchester is still in awe at how lucky she was. "It's sort of that butterfly effect. If I had spun a little softer or harder, I would have gone bankrupt and the outcome would have been totally different,” she reflects.

No matter how much luck played a role in her win, it all came from the fact that she auditioned in the first place. She has some advice for her students: take risks. "If you're going to try for something, you may not get it and you risk being disappointed. But if you don't risk being disappointed, you know you can't succeed. You have to give it a try and see what happens. In this case, it worked out fantastic,” she says, with a smile.