Behind a small counter, a student furiously fills in paperwork as more is passed up. Another student digs through mounds of forms and records information on a deposit log-sheet. Money passes through hands and makes its way securely into a cash box. As the first student completes the paperwork, a teacher in the background gives an approving nod.

These are the inner workings of the Blair Vault, a student-run credit union for Blair students and staff members and one of nine Montgomery County Teachers (MCT) Federal Credit Union in-school branches. Through hard work on the part of student tellers and Vault head and business and computer science resource teacher Linda Rogner, the Vault has evolved from a previously untapped resource into an operational credit union and conduit for teaching students fiscal responsibility. 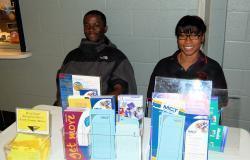 Photo: Senior Kingsley Asare and junior Megan Ferguson work at the vault during 5B lunch.

Photo: Senior Kingsley Asare and junior Megan Ferguson work at the vault during 5B lunch.

Just four years ago, the Vault was all but nonexistent, with only about 60 members in a school of over 3000 students and staff, according to Rogner. The Vault now boasts 250 members, 75 of whom joined just last year. "I pride myself in that since I took over, the Vault has been open during lunch ever Tuesday and Wednesday," Rogner says. "The Vault is a lot of work for me but it takes real commitment from the students as well."

Blair has the busiest in-school branch in MCT, according to Lynne Talon, MCT in-school branches manager. The volume of the number of transactions at the Blair Vault, open two days a week, is higher than that at other schools. "Blair's our number one school branch the last two consecutive years," Talon says. About $1,000 is deposited and $100 is withdrawn on average from the Vault each week, according to Rogner.

This year the Vault is continuing the previous year's success. According to Rogner, 50 new members have opened accounts since Dec. 17, a promising beginning to the new year.

A team of student tellers is responsible for keeping the Vault running at such high efficiency. When it opens at 11 a.m., two tellers set up a table outside to attract customers. Another teller receives customers at the front window while yet another records all transactions in deposit and withdrawal logs and fills out necessary paperwork.

Customers use the Vault for anything from depositing money to getting updated information on savings accounts. At the end of each lunch period, the tellers must carefully recount all the money that was handled. "It takes a lot of dedication from all of us," senior Stephanie Verduguez, Vault co-manager, says.

Blair's Vault won the Top Branch of the Month award for November according to Rogner. With so much cash flowing through their hands, Vault tellers must be especially careful to make no mistakes in balancing money. "It's not just our own money. We are handling other students', other teachers', so we have to learn to do our jobs correctly," senior Stephanie Flores, a Vault teller, says. "Even a single penny can throw a balance off."

Rogner believes that student tellers have learned many valuable skills such as communication and confidence through their experience in the Vault. "I've seen a lot of students blossom. Many of them could not handle other students and teachers confidently, but now they can with ease," Rogner says. "[The Vault] is truly a great growth tool."

Verduguez began her work in the Vault after hearing about the volunteer opportunity in her AP NSL class in 10th grade. "When I first started, I barely knew anything about finance but I leaned throughout the years," Verduguez says. As the Vault's co-manager, she now teaches new student recruits the importance of fiscal responsibility.

Trained tellers also take turns pairing up with new recruits to show them the workings of the Vault. "We always make sure that they aren't afraid of asking questions," senior teller Phi Quang says. "After two weeks they'll know the general procedure. It's a learning experience for all of us after all." Even though the entire Vault staff only meets together once per month, their team of 13 students has grown into a close-knit band.

Vaulting into the future

In addition to teaching students communication and financial skills, working at the Vault comes with financial incentives. Even just opening an account provides an opportunity to win a scholarship. Over the years, many Blair graduates have won money towards college tuition from scholarships, awards and internships.

Every year, MCT awards four high school seniors and college student members, not necessarily staff, $1,500 scholarships under the Bill Tell Memorial Scholarship. Applicants must be enrolled in an accredited college and submit an application including a transcript, a sheet of extracurricular activities and a short essay. A 2003 Blair graduate, Reyna Camps, received the scholarship in both 2003 and 2007 and graduated from Stanford University last year.

MCT also awards one $1,000 Top Senior Teller Award, which 2006 alumna Margaret Khan won last year. Khan began volunteering at the Vault during one lunch period a week in her sophomore year and stuck with it ever since. "It taught me good financial habits and provided opportunities to actually visit and speak to people working [at MCT] such as identity theft, marketing and customer service reps," Khan says.

Emmy Franz, a 2006 Blair graduate, has been working as an intern at the MCT Aspen Hill Branch since the summer before her senior year. As a result, MCT is now paying part of her tuition at the University of Maryland.

Though not all tellers plan on pursuing financial careers, the interpersonal and monetary skills they've learned at the Vault will be useful throughout their lives. "It's not necessary at all to be in banking or finance in the future," Rogner says. "The students' work in the Vault will serve them well in any future."