An all-purpose guide to the financial meltdown

Amidst the financial lingo and the political spins, Silver Chips Online has decided to break down the past events and show what it all really means. That way, you'll understand what is really happening to your money when you put it in the bank. We'll take a look at how the recent events affect you as a student and as a spender. But first... 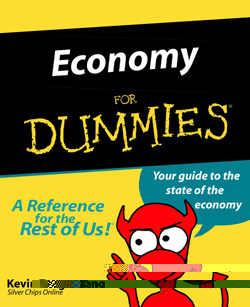 Before 1974, there was a lot of government spending and regulation - an aftereffect of the measures taken to fix the Great Depression. When the U.S. government changed its economic policy once again, the government dropped many regulations on the economic system and entered a phase of economic policy (see Deregulation). Until a few years ago, the economy flourished because people bought goods and services at unprecedented quantities.

The economic structure of the U.S. became a nearly market-based economy. The government did not intervene in the markets until something went wrong. We saw government interaction mostly when big corporations like WorldCom and Enron falsified their earnings and therefore collapsed.

Without much regulation, banks are able to take a lot of risk when it comes to making more money. Because most people save money in bank accounts, these banks gain a lot of capital. With your money, banks make financial decisions in different industries – they buy and sell bonds, commodities and most importantly, loans.

In the past few years, more and more people have bought houses because the housing market seemed infallible. Many people bought houses to make money, thinking that in a year they could resell the house for a higher price. Others wanted to live in a home for the first time. In most cases, homebuyers take out huge loans because they don't have all the cash to pay for the property upon signing the papers.

When a loan to buy a house is made, a bank buys the property and allows the borrower to pay for the property gradually with interest. If this loan, also known as a mortgage, hasn't been fully paid, the bank owns the house. However, upon full payment over a long period of time, the ownership of the house is transferred entirely to the homeowner.

Our problem starts when homeowners realize that they can't afford to pay their mortgages. The lending banks then seize control of the houses, otherwise known as foreclosure. Then the banks sell the houses because keeping the properties wouldn't be profitable.

The next logical step is for the banks to resell the houses at their value so that there is no loss, right? Wrong. Because house values are falling greatly, the price at which a bank can sell a house is lower value than its purchase cost, ending in a net loss. For example, a bank may make a loan for $600,000 for a house in Silver Spring only to foreclose it and have to sell the house at $500,000 three months later, resulting in an immediate loss of $100,000.

Banks that make many of these loans have lost money on a lot of them in recent years. As a result, many banks have failed. Then the government sometimes steps in and tells everyone that the market is just fine – only one bank suffered and the industry was growing.

Other consequences outside of the direct housing industry make the U.S. economy much worse, resulting in a massive economic recession. Banks lend each other money when they need it. However, the overall failure of many small banks snowballed and caused larger corporations, still relying on the money lent to small banks, to fail. Fannie Mae and Freddie Mac both made "secondary loans" – when the smaller banks failed they failed as well. The loss of large corporations caused a credit panic – banks with money now do not want to make new loans, even to borrowers who can afford to pay for them. Some small businesses that need money are then unable to grow because they don't have the capital to buy new materials or pay their workers. As a result, many people in those businesses are scared that business will fail.

The biggest problem is that banks and companies can use money in their customers' accounts to pay off their losses. The idea that the companies with your money can vanish creates a scare that makes people want to transfer their money where they know it's safe.

One unstable place to put money is stock, an indicator of a company's health. A lot of people have lost money on these stocks, attempting to salvage as much capital as they have invested into it. The stock prices of many companies fluctuate daily by gigantic amounts.

Unfortunately, the U.S. economy has affected the global markets as well, sparking international losses that threaten to bring a depression. If people lose all confidence in the economy, your money will be useless.

What has been done?

To calm the nerves of some investors, governments and flourishing banks all over the world have cut interest rates to encourage borrowing. Stronger banks have acquired parts of weaker banks – a move that will make them rich if the economy rebounds.

The U.S. government has recently passed an emergency bill - the Emergency Economic Stabilization Act of 2008 - in an attempt to boost the economy. The bill sets aside up to $700 billion of federal money to purchase bad loans from banks in an effort to restore confidence in both investors and lenders. It aims to stimulate the economy by encouraging more spending and lending. Other massive bailouts have been enacted by governments around the world.

The U.S. bailout has been criticized as being too regulatory by some as it undermines the ideals of the free market. To these critics, the American taxpayer should not have to pay for another person's bad foresight, especially when it pardons the banks for giving out bad mortgages. The bailouts are also seen as a risk-remover, as they show that the government will pay for poor investment choices.

It is unclear whether the bailout will work to restore the economy. Banks are still on the cautious side – until everyone knows that their money is safe, they will not lend as much as before because they fear that more people will renege on payments.

Regardless, all three of these groups did not fully understand the problem until it got out of control. The government saw bank failures as local and not widespread. The banks didn't think that it could happen to them because for a long time, the profit from interest had been higher than the losses in foreclosed houses. The homebuyers didn't fully understand the risk involved in a mortgage; many of them have low credit as a result of walking out on their mortgages. Ultimately, most people thought that the rising home prices would infinitely rise, leading to poor lending decisions.

What can we do?

If your money is in an account, make sure the account is insured by the Federal Deposit Insurance Corporation because if the bank that has your account fails, the government will insure up to $250,000 of your money. You may also want to invest in U.S. government bonds - short term yields are ridiculously low, but they're much better than losing the entire principal amount of money that is rightfully yours. Most importantly, make sure you read the fine print to make smart decisions with your money.

Students especially may be hit by this problem when they take out loans to pay for tuition. If the loan industry does not reboot, banks will be very cautious about lending money to new adults without existing credit, jobs or savings. Many people may not be able to afford tuition at expensive colleges; students, if you need financial aid to attend college, apply to schools that offer scholarships. In-state tuition is often subsidized, so colleges like the University of Maryland may warrant a second look.

Many other investments, such as mutual or hedge fund accounts that rely on the activity of the financial markets, can continue to decrease in value, especially if the economy continues to stagnate. It is unclear whether the economy will worsen before it gets better, so be cautious and read up on the news.

Note: For all of you curious people, you can see how your home value has changed over the past years here.