Answering questions about the presidential race before the voting begins

The 2016 presidential campaign has been the most unpredictable and entertaining race in recent memory. In the Republican race, a reality TV star and a senator widely despised in his own party lead in the polls. In the Democratic race, a self-proclaimed socialist is giving Hillary Clinton a real run for her money.

In the next couple days, all the furious campaigning and media speculation will come to a head as actual voting gets underway. On Feb. 1, voting begins in the Iowa caucus. The New Hampshire primary follows a week later. For those Blazers who haven't been closely following the race, this story will try to get you up to speed on the state of the Republican race. I'll introduce the frontrunners in the race and describe their chances of winning the GOP nomination. A couple days from now, I'll post a similar story about the Democratic race. 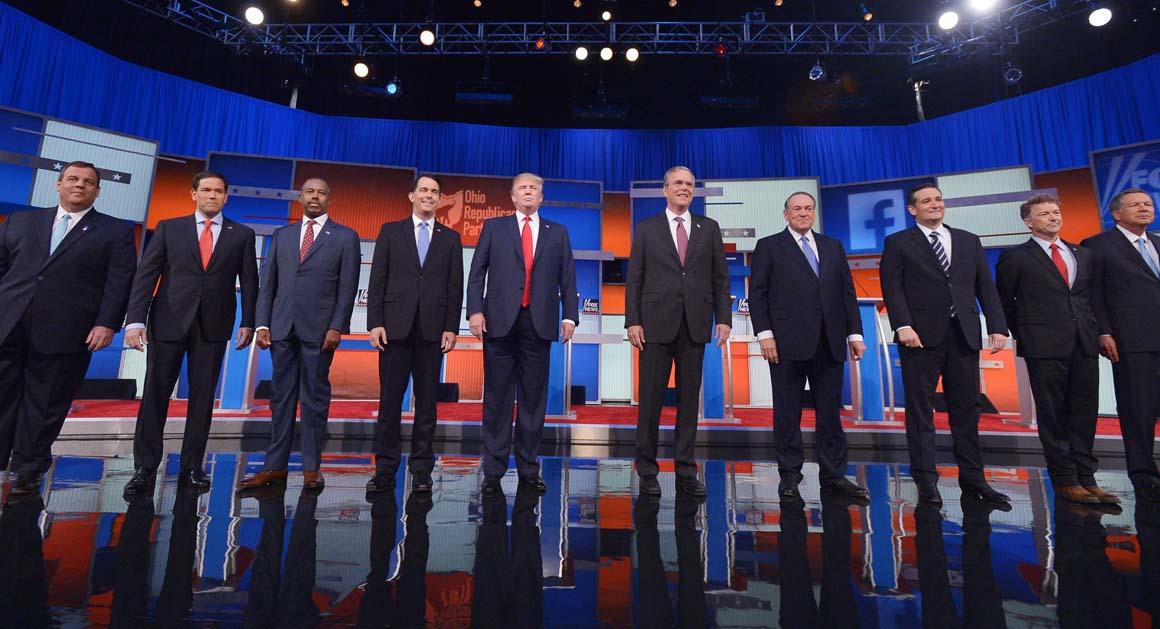 Photo: The 2016 GOP race has raised questions about the future of the Republican Party.

Photo: The 2016 GOP race has raised questions about the future of the Republican Party. Photo courtesy of Politico.

Before beginning, a disclaimer. So far, predictions on this race have been proven consistently wrong. Analysts, reporters and political scientists have scrambled to explain this bizarre campaign. So all analyses or predictions I make are done with all due humility.

And now, on to the Republican race.

Who are the frontrunners in the Republican race?

Donald Trump has led in the polls since last summer despite a host of xenophobic, racist and false exhortations. He called Mexican immigrants criminals and racists, claimed that thousands of American Muslims publically celebrated 9/11—despite no evidence for this assertion—and, most recently, called for a total ban of Muslims entering the United States. Even if you haven't been following this race, you've probably heard about Trump. That's because the media has followed him incessantly since his announcement. His rise has shocked all political observers and defied all predictions, leaving pundits scrambling for an explanation.

Conservative favorite Ted Cruz is running second in national polls. Cruz rose to fame and notoriety after leading the Tea Party charge to defund Obamacare, shutting down the federal government in the process. His policy positions are actually more conservative than Trump's, favoring a flat tax on income, a constitutional ban on all abortions and the elimination of several government agencies including the IRS and Department of Education. Because of his grating personality and naked ambition, Cruz is widely despised by establishment figures in his own party. This has only improved his standing among disillusioned conservatives in his party, especially in Iowa where he has a lot of strength.

Senator Rubio is the most moderate of the frontrunners. Running a distant third nationally, Rubio has been frequently described as a "Republican Obama.” He is young, very charismatic and a powerful speaker. He rose to the Senate in the Tea Party wave of 2010. He also supports drastically cutting taxes, banning all abortions and massive investments in defense (some have suggested the reason he has failed to consolidate establishment support is because he's too conservative). Among strong conservatives he is hurt by his support for a bipartisan immigration bill. But in many ways, he's an ideal nominee. His lack of real success thus far has been one of the big surprises of this race.

Why is this race so crazy?

The short answer: no one knows.

The long answer could fill several books, and likely will in years to come. The main surprise of this race—exemplified by the rise of Donald Trump and Ted Cruz—is the lack of sway the Republican Party establishment has over actual Republican voters. The "establishment” is the group of party leaders, elected officials and interest groups that make up the core of the party.

After the loss of moderate Republican Mitt Romney in 2012, the GOP wrote a report evaluating their loss. In this report, the party's leaders said that Republicans had become synonymous with old—often wealthy—white men. The GOP leaders said the party would wither and die unless they could appeal to demographic groups dominated by Democrats—mainly Hispanics and lower income voters. With this in mind, it would make sense that they would nominate a candidate like Rubio, a Hispanic conservative with thoughtful policy proposals to address poverty and illegal immigration.

But Republican primary voters had a different idea. So what's going on? Why are Cruz and Trump so successful? Many observers describe the rise of Trump and Cruz as an extension of white, middle-class discomfort with a rapidly changing nation. This shift is economic—the crumbling of the manufacturing industry and shrinking of the American middle class leaves many white Americans frustrated with an economy and nation that used to belong to them. Some argue that the shift is also racial—white conservatives feeling as though their woes can be attributed to immigrants, minorities and the "political correctness” that they demand.

Again, it's important to emphasize that these are just theories. It will likely take years of retrospective research and analysis to truly understand the rise of Trump and Cruz.

Who's going to win?

Will Trump or Cruz actually prevail? Or will the GOP drastically change course and nominate a moderate like it has for the past couple decades? A lot of debate on this question revolves around "The Party Decides,” a theory widely accepted among political scientists that says elite support within the party usually predicts who the party nominates. When faced with the success of Trump, many commentators declared "The Party Decides” dead: party elites no longer have the power over their voters to give cues to preferred candidates (this argument is also relevant to the Democratic race, as I'll discuss later).

But many analysts—mostly political scientists--aren't convinced. Jonathan Ladd, a political science professor at Georgetown University put the debate between political scientists and journalists, who tend to discard "The Party Decides” this way: "Journalists are always more willing to say that things have changed in recent years and the old rules don't apply. Political scientists are much more likely to say that politics works similarly to how it did in the past.” These defenders of "The Party Decides” argue that voters always flirt with fringe candidates early in the process before falling in line behind the establishment favorite. But, in the end, voters have always fallen in line.

So, who's right? It's hard to say. But if Republican voters are going to switch support to an establishment candidate like Rubio, there hasn't been any evidence yet in the polling to suggest that this is the case. In fact, Rubio has been falling behind in New Hampshire polls—a fact largely attributed to his lack of presence in the state. It now looks very likely that Trump or Cruz will win in Iowa. And Trump holds a commanding lead in New Hampshire, as well as a double-digit lead nationally. If Trump is going to lose, it's tough to see exactly when that will happen. Ezra Klein at Vox.com argues one loss in an early state could lead Trump to slowly decline and then implode. That's plausible. Trump's appeal is based on being a winner, so we don't know if he could withstand losing a primary.

If Trump or Cruz lead in delegates--when candidates win primaries, they get delegates--going into the Republican National Convention, establishment figures would likely be terrified. These party leaders could orchestrate what's called a "brokered convention.” This means that all the delegates—people chosen to represent the primary voters of a state—could abandon the candidate their state voted for and rally behind an establishment candidate. A brokered convention would create a massive rift in the party, perhaps even leading Trump to run as a third party candidate—a scenario that would almost certainly hand the election to the Democratic nominee.

This race has the potential to redefine the way we think about the Republican Party and American politics. Although it's nearly impossible to predict the GOP nominee, one thing can be predicted confidently: this race is not going to get boring anytime soon.