What's in a name? Credibility and responsibility 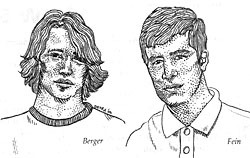 "Sleeping at her desk, senior Xenadra looks just like the Blazers who surround her. At first glance, it's tough to tell that she is in fact a drug-addicted gang member and illegal immigrant from a war-torn nation, struggling to come to grips with her bisexuality in an overcrowded school."

Although this lead was meant as a joke, part of a fake story in last June's senior spoof issue, it parodies the very real overuse of anonymous sources in Silver Chips. In this year's volume, the Editors-in-Chief have decided to significantly restrict the number of stories using anonymous sources.

Our policies stipulate that reporters should only use anonymous sources when the source could be "subject to repercussions from the police, the school's administration or their parents."

Often, reporters are forced to choose between using sources anonymously or having no source at all. In this issue, the only story that uses an anonymous source is "A family matter" on page 15. The feature uses two on-the-record sources, but the third asked to remain anonymous to protect him from possible danger at home. Even though the story uses an anonymous source, we believe it is newsworthy because it calls attention to an important issue affecting students in the Blair community.

When dealing with anonymous sources, Silver Chips follows strict requirements specified in our stylebook to ensure that no reporter is tempted to fabricate sources. Before first drafts are due, any reporter planning to use anonymous sources must turn in a sealed envelope with the sources' real names, grade levels and pseudonyms to either the Editors-in-Chief or the faculty adviser. Reporters can ask their sources whether they would prefer the adviser or the Editors-in-Chief view their identities. No one else sees the sources' real names. With these policies in place, we try to guarantee the safety and privacy of any person used as an anonymous source while still ensuring accuracy.

Silver Chips's policies are designed with the ultimate goal of producing a paper that reflects every facet of Blair — a paper that staff and students can read and relate to. Anonymous sources may provide entertaining material, but they tend to be sensational, dealing with sex, drugs and crime. These stories produce stereotypes about Silver Chips that we wish to avoid, as we want readers to see news about real student work, contributions and concerns rather than see yet another drug story and say, "Who actually does this stuff?"

To contact the Silver Chips
Ombudsmen, send an e-mail to chipsombudsman@gmail.com.

Jordan Fein. Jordan Fein is a magnet senior (woot!) who is enamored of politics and journalism. He is very politically active and enjoys talking politics with whomever is willing. Politics, politics, politics. He is looking forward to his second year of writing on Silver Chips and especially … More »