When age is the limit

Since he started at Blair, senior Willy Marte has worked hard to maintain an above-average GPA and an excellent attitude. His teachers can only sing his praises. But Marte is 19 years old and while he intends to stand proud in a cap and gown this May, for many in his situation, age is more than just a number - it is the deciding factor in the fate of their education. 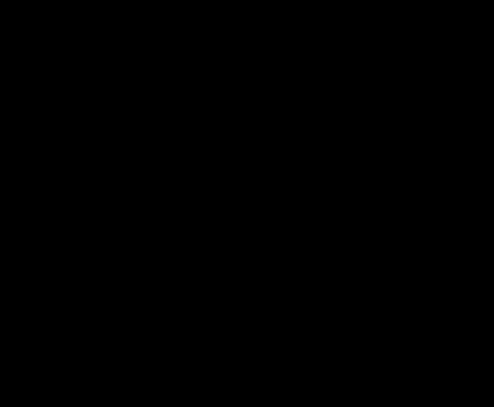 Photo: Of the just under 100 students at Blair who are currently between the ages of 18 and 21, 95 percent are immigrants who are part of ESOL, according to ESOL level five teacher Kristin Mena.

Photo: Of the just under 100 students at Blair who are currently between the ages of 18 and 21, 95 percent are immigrants who are part of ESOL, according to ESOL level five teacher Kristin Mena. Photo courtesy of Xin Shan.

As per Maryland State Board of Education (MSDE) regulation, a high school student is only entitled public education until the semester during which he or she turns 21, after which the state stops funding their education, according to MSDE Education Program Specialist Bill Reinhard. At this point, the final decision about the student lies with the parents, the principal and the county school system, Reinhard says.

There are just under 100 students at Blair who are currently between the ages of 18 and 21, based on figures compiled by English for Speakers of Other Languages (ESOL) level five teacher Kristin Mena. About 95 percent of these students are immigrants who are part of ESOL and end up in the age crunch while scrambling to meet graduation requirements.

When he arrived in the United States from the Dominican Republic in 2006, Marte went from being a senior in high school only three months away from graduation to being a sophomore at Blair. "I came here and they took away two years," he says, revisiting the desperate feeling that hit him when he learned he would be placed in tenth grade. "I just wanted to go home and finish and come back," he says, but friends and family convinced Marte of the value of an American high school diploma, and now the senior is on track to graduate.

Mena can identify two main situations in which the age limit becomes a concern. The more common situation is the student who arrives in the United States having attended high school in their home country, like Marte did. Credits are frequently lost in translation; for example, an Algebra credit from abroad may arrive here as "math," which means nothing on a transcript. 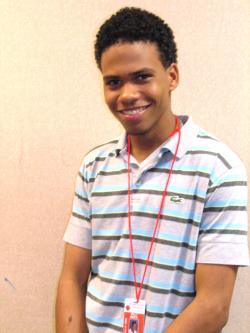 Photo: Senior Willy Marte, 19 years old, is on track to graduate despite losing two grade levels after moving from the Dominican Republic in 2006.

Photo: Senior Willy Marte, 19 years old, is on track to graduate despite losing two grade levels after moving from the Dominican Republic in 2006.  Photo courtesy of Alex Lutz.

Junior Daniela, who is 20 years old, came from Cameroon and started at Blair as a sophomore when she was 19 years old. Like Marte, she was disheartened by her initial placement as an underclassman, having grown up immersed in English. "It was very strange to me because what they do in ESOL they do in middle school in my country," she says. But also like Marte, she is college-bound and has not had much trouble succeeding at Blair. "I believe if I'm in a classroom with a teacher, I believe I can do anything," Daniela says.

The other most common scenario encompasses students who have had one or more years of interrupted schooling in another country due to reasons such as war, economic struggles or mishandled learning disabilities. "It's not unusual to get students who had interrupted schooling who are 17, 18 years old who speak no English," Mena says. Such a student needs about six to seven years of schooling to meet graduation requirements, Mena says.

Keith, a 20-year-old sophomore, may not have the chance to graduate. He arrived in the United States two years ago from El Salvador. "One of the hardest things is that I didn't know anyone," Keith says through a translator. "I came only with my brothers and father." Back in El Salvador, Keith dropped out of school in sixth grade to work, and now hopes to earn an American high school diploma to help provide financially for his mother, who is still thousands of miles away.

Keith has advanced to ESOL level three, but students at that level generally need two more years before attempting the English High School Assessment (HSA), Mena says. Keith turns 21 this summer, and as much as the ESOL staff wants him to stay, they do not have the legal obligation nor the state funding to educate him after 21. 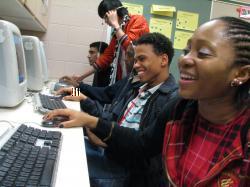 Photo: Marte takes time out of class to joke with a fellow student.

Photo: Marte takes time out of class to joke with a fellow student. Photo courtesy of Alex Lutz.

Keith understands his predicament. "I worry about it all the time…I understand the rule and if they can't give me any more time I will understand," he says humbly.

While Keith's future is unclear, he is taking full advantage of the opportunities he has as a high school student now. Keith enrolled in summer school between his first and second years in the United States - a period he describes as "rough" - as an extra push to bolster his learning. Older students often choose summer school to fit in as much classroom time as possible, Mena says, but it rarely amounts to advancing a grade or ESOL level.

If a student at Blair is aging out but on path to graduation, a Blair administrative team including Principal Darryl Williams makes the ultimate decision. "Mr. Williams has informed us that he wants to handle these situations on a case by case basis. We inform him of the circumstances; he sometimes meets with the kid and he makes a decision," ESOL counselor Diana Blitz says.

When it comes to a specific older student's future, Blitz says a number of factors are considered. "Typically, if the student is in good academic/behavior standing, then no one notices. It does become an issue and noticed, however if the student is truant frequently, performs poorly academically, is a behavior problem or a combination of all three," she explains. "In other words, no student 21 or older who comes to school responsibly, has decent grades and obeys school rules has been asked to withdraw." 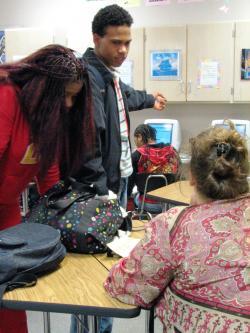 Photo: Marte asks for help on an assignment.

Photo: Marte asks for help on an assignment.  Photo courtesy of Alex Lutz.

In other cases, the discussion never happens, because many older students struggle to maintain a regular attendance, drawn away from school due to life's other pressures. "The cultural expectation for many is that by the time someone is 18 or 19 they will be helping provide for the family, even in situations when the family places high value on education," Mena says. "It takes an immense amount of family support to allow so many hours of school without work to graduate."

Keith has that support. "My family really wants me to finish high school," Keith says, but he still balances a job, which his family knows would become a bigger priority if Keith were not allowed to stay at Blair.

While an older student's eventual fate may be hazy, they are aware that they may be asked to leave. "What happens more frequently is it becomes clear that a student isn't going to have enough time," Mena says. "Teachers and counselors are honest with them and say, 'Here's what you can get done.'" The ESOL department tries to know the story behind each of their students and is upfront about how long each one has to graduate.

Even the students asked to leave appreciate the time they did get at Blair. Keith is grateful for the mere opportunity to attend high school and is proud of the progress he has made at Blair. "I feel I understand a lot more. I don't feel as lost," he says.

Though most appreciate the education they receive, older students are often reluctant about disclosing their age to their non-ESOL peers in the classroom. "They tend to be pretty self-conscious about it," Mena says of her older students. "Outside ESOL, students, even teachers, make comments." 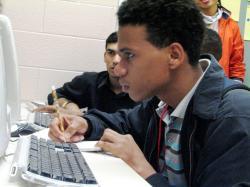 Photo: Marte working on a poetry translation in class.

Earlier this year in Marte's majority tenth grade NSL class, the students were discussing the year 1992, and the teacher remarked that everyone in the class was born in that year. Marte spoke up, "I was like, 'Actually, I was four in that year.'" The class responded with confused outrage. "I didn't feel comfortable," he recalls.

Mena is frustrated by this treatment. "The assumption is that something is really wrong with them," she says, which is ironic because the students who stay are extremely dedicated and successful in school.

For many older students, their unusual age is an incentive to perform to a higher standard. "Most of them are very, very motivated," Mena says - otherwise they would not still be enrolled in school.

Keith does not take his time at Blair for granted, because once he turns 21 he knows he is on borrowed time. "I am focused on graduating," he says, and tries not to think about what the alternative would mean.

Marte shares Keith's motivated attitude. "Sometimes I'm sad because I was supposed to be in college already," Marte says, but working hard is "the only thing I'm thinking about."

Because of his hard work, Marte will graduate on time - when he is 20 - and has plans to attend Montgomery College and later the University of Maryland.

Keith hopes he will be granted a similar opportunity. He doesn't speak many words of English confidently, but there are at least four he is sure of: "I want to graduate."