When divorce drives parents apart, academics take a back seat

Blazers attempt to keep up with their schoolwork, despite split homes

He wakes up at 6:30 a.m. Instead of getting ready for school, he ignores his alarm clock and goes back to sleep. After an argument with his mom last night, all that junior Marty Viger wants is to be with his dad. But Viger's parents are divorced, and he has to stay at his mom's for another week. This stressful knowledge makes going to school out of the question; he needs a day off to recoup. 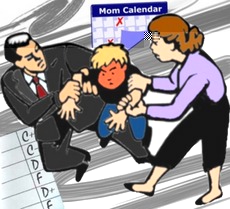 Viger isn't the only student to struggle academically after divorce. A 2002 USA Today study of the effects of divorce on children shows that psychological damage builds before a divorce and subsides after it, but academic progress continues to weaken throughout a student's educational career. Likewise, Ohio State University researchers speculate that during or after a divorce, children may initially fall behind academically and have trouble catching up in class. Even worse, they lose their motivation. According to a National Health Interview Survey of Child Health taken in 1993, "children from disrupted marriages are over 70 percent more likely than those living with both biological parents to have been expelled or suspended."

Dealing with the divorce

Junior Garrett Duncan is a successful student. In fact, he's graduating a year early, and heading off to live with his brother and attend college next year in Vermont. But in middle school, Garrett was in no position to succeed—his parents' marriage had just fallen apart, his grades were slipping and so was he—into depression.

Nancy Wilson, a licensed clinical social worker for 27 years, says that students with divorced parents often suffer immense emotional damages. "Divorce is sprung on kids like a trap door dropping them into a new land; it turns their world upside down," Wilson says. She also says that various studies have shown teenaged boys to be more affected by divorce than teenaged girls. "Girls are more resilient and subject to come back from an incident—they don't dive bomb," she says. Despite girls' higher probability of recovering from a divorce, Wilson agrees that both boys and girls have difficulty dealing with the situation. "While I can't say this is true across the board, there are kids who really fall apart; there's no doubt about it."

In addition to emotional trauma, students sometimes find that the logistics of changing homes can have the biggest impact on their schoolwork. Senior Sophie Esparza's parents have been divorced since she was four. Her grades haven't been affected by her parent's divorce. Organizationally, living at two houses poses a problem. "It's really inconvenient when I have to go pick one thing up at the other house or have my parents drop stuff off," Esparza says. "I have a lot of lost books hidden in closets."

When she leaves one house for another, she also leaves behind one parent's territorial control over her schoolwork. Esparza finds that her two homes present contrasting atmospheres for doing work. "They're both really different. My mom is more persistent about me doing my work, but my dad usually leaves it up to me," she says.

At first, Esparza's parents had trouble agreeing on their parenting techniques. "When I was younger it was different. [My mom] would be like `Make Sophie study!' and [my dad] would say, `Let her do it on her own time.' Now, they don't disagree as much, but they also don't have any say about how I work when I'm at the other house." For the most part, this method has proved successful for Esparza, who has maintained strong grades throughout high school.

For Viger, it's his own attitude towards schoolwork that changes when it's time to pack his bags. He finds that he is less productive and academically successful at his mom's house than his dad's house, making it more difficult for him to earn good grades. Viger's parents only live about half of a mile apart, but the gap between his work habits at the two different homes is immense. "My mom pretty much acknowledges that I work better at my dad's house," he says, admitting that the tension between him and his mother make focusing on schoolwork much more difficult. "I'm not going to say my grades are bad because of my parents' divorce—that's pretty much my fault, but there are some factors, you know? The whole thing just kind of makes me care about school less."

Recently, Viger decided to stay only at his dad's house for the time being. He finds that he is less stressed and finds it easier to complete his homework. Since then, Viger's work-study habits have improved, and his grades are looking up. He is finally learning to cope with the reality of his parents' divorce, making it easier for him to go about his life as a student—and as a teenager. Wilson agrees that many adolescents suffer from having to switch between homes. "Divorce shakes their whole world view—of security and feeling, and having to worry about dividing up the holidays," Wilson says.

As for Duncan, he gets good grades in honors and AP courses, and his depression is long gone. "Now, I've really gotten the hang of it, and my parents are pretty relaxed," he says. He's finishing up the courses he needs to graduate by June, and hanging out with his friends. Duncan has adjusted to his parent's divorce, and is able to work comfortably at both homes. "I pretty much stay myself the entire time, and hey—they both seem to be fighting less."