When is a joke not a joke?

It is a universally accepted truth that you have to be really intelligent to understand humor. You usually feel pretty stupid when you don't get a joke. But when taken out of context, jokes are easily misunderstood. That's what happened to political satirist Stephen Colbert with a joke on his show the "Colbert Report." The show's official Twitter sent out a related tweet that was considered racist and offensive, spurring discussions on the meaning of Internet activism, the dangers of racist jokes and the value of shows such as the "Colbert Report." But critics fail to understand the point of satire such as Colbert's satire, in context, is necessary to criticize essential issues.

The tweet in question was related to a segment of the Report that aired on March 26. The segment criticized the Washington Redskins Original Americans Foundation , an organization created by Dan Snyder to appease those offended by the Redskins team name. Colbert implied that the organization was offensive by announcing his own similar organization: the Ching-Chong Ding-Dong Foundation for Sensitivity to Orientals or Whatever. The next day, the show's official twitter account, not run by Colbert himself, which said, "I am willing to show #Asian community I care by introducing the Ching-Chong Ding-Dong Foundation for Sensitivity to Orientals or Whatever, without any explanation of the segment that it came from. The tweet and Colbert himself were immediately attacked, first and foremost by Suey Park, an Asian American and internet activist. Park started the hashtag #CancelColbert as a way of retaliating. Colbert made an official apology and explained everything on his show the next Monday and deleted his official Comedy Central-run "Colbert Report" Twitter account.

The main reason that this tweet is so controversial is because of the way it portrays Asian Americans. This brings up the controversial question of which jokes are okay and which are not. Humor is inherently offensive because jokes are always made at someone else's expense, but most would agree that when a joke is deliberately or unintentionally hurting someone, it is inappropriate. It is definitely inappropriate to make fun of any racial or other background differences, but that's not what Colbert was doing. Sometimes, however, that kind of humor is necessary to get the point across. This isn't the first time an out-of-context quote has fried a satirist. As far back as 1729, Jonathan Swift in his "a Modest Proposal" , suggested, satirically, that Irish parents sell their babies for food. Eating babies sounds like a horrifying idea, but the point that Swift was trying to get across was imperative: something needed to be done about the poverty he was witnessing. In a similar way, Colbert is trying to show, not just with this tweet but with his absurdly conservative character, the fault in some parts of radical conservative ideology. Snyder's organization, rather than appease Native Americans, is offensive and ineffective, much like Colbert's fictional organization. If people are offended by him and not the beliefs that he is parodying, then they are missing the point of his show entirely. 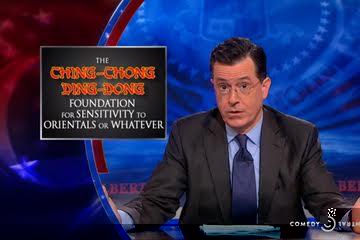 The reason that most people are getting angry, though, is because of how far it was taken out of context. For those who have not seen the segment , it definitely came off as a bit harsh. Many people followed Park's lead and called for the Report to be cancelled, however, this was not the first, nor will it be the last time Colbert says something offensive. But any other remarks or segments of his show could also be considered wildly inappropriate out of context, including "Rosa Parks was overrated," "Hitler had some good ideas," or the time Colbert "ran a cartoon during black history month showing President Obama teaming up with the Ku Klux Klan," as he said during his explanation segment ., joking that he hoped that those weren't taken out of context, too. This is because the nature of Twitter and other social media that limits personal expression, the short attention span of the public and 10-second sound bites lead to all sorts of unintentional political gaffes or and social missteps. In order to fully understand a remark, it has to be in the correct context, in the full quote, or meanings can be misconstrued, feelings can be hurt and shows can be cancelled. As Colbert himself said in his follow-up segment, "Who would have thought that a means of communication limited to 140 characters would ever create misunderstanding?"

Philosopher Alain de Botton wrote in his book "Status Anxiety" that humorists such as Colbert are able "to convey with impunity messages that might be dangerous or impossible to state directly." This is what Colbert is doing. He is not joking to be funny, he's joking to point out issues in the world. If it takes bluntness and outright mocking to show how useless and pointless an organization is, so be it. His efforts get the story into the headlines in a way it previously might not have.

Obviously, there is a line. But the Colbert Report is usually careful to not cross that line, however close it might step. Ultimately, however, people shouldn't be angry at the Colbert Report, but rather at Snyder and the Redskins for their name and almost as offensive organization. The point of satire is to highlight these issues, and it should be allowed to continue in the way it has for centuries, pointing out the flaws in humanity.