School versus sledding is an easy choice to make

If American boards of education are known for anything, it's their winning ideas. Maryland alone has come up with countless dazzling concepts in recent years: yearly MSA testing, mandatory tornado drills and of course Edline, alerting our parents to our every academic failure since 2006. But this year, our nation's school boards have outdone themselves. Eight inches of snow forecast for tomorrow morning? Well, set your alarms for 6 a.m., kids, because it's time for online school on a snow day.

Okay, okay, put down your torches and pitchforks. I didn't mean to scare you. Online snow day school days, or "e-days," don't exist in Montgomery County yet. They started out in the Mississinawa Valley School District in good old western Ohio, where some schools are piloting an e-day program this year. But we're not safe yet – news reports say that the policy is also being considered in (cue Jaws music)…Virginia. The very same Virginia with which we share a border. Granted, they may only be considering the program in far-off Washington County, but the threat is real. The e-days cometh.

Fortunately, this approaching horror is still in a somewhat vague stage of planning. The basic idea of the e-day policy is to have students access online lessons in the form of podcasts and other media on days when school is closed due to weather. That way, the students don't lose instructional time, and the school board doesn't have to extend the school year into the summer if the allotted snow days get used up.

Everyone say it with me: Ha, ha. Good one, Ohio. Most of the students I know have to be woken up by military force and threatened with loss of credit (well, in previous years they did) just to make it to school on a regular day. But don't worry, Mississinawa County, I'm sure that if you tell your students not to come in to school and let them stay home while they watch big flakes of snow fall outside their windows, they'll listen to your podcasts on cell mitosis. Definitely. 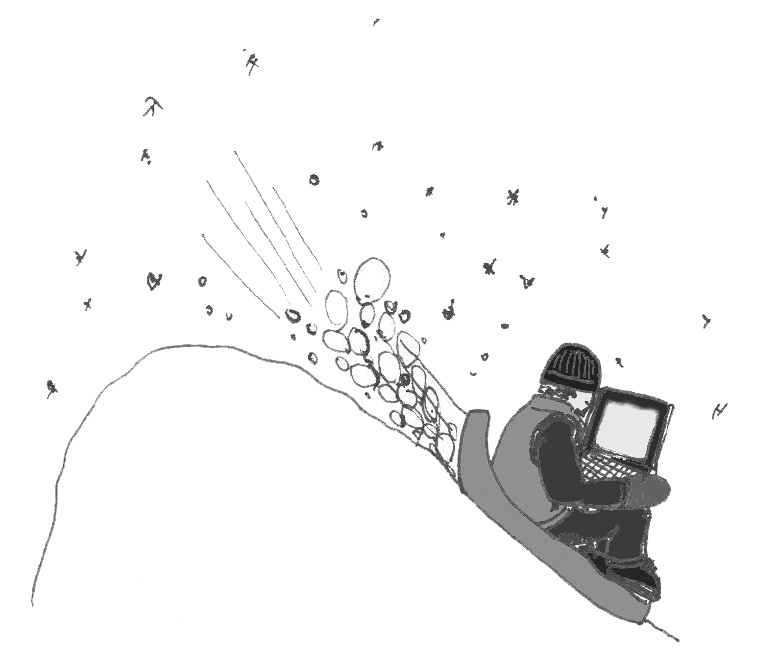 Photo:
Sorry, that may have been a bit hostile. But e-days would truly create a lot of extra work for both students and staff. Teachers would have to deal with making extra online lesson plans, grading snow day assignments and sifting through thousands of excuses from students claiming that their computers were run over by snowplows, not to mention all the students who don't have Internet access at home. And as much as teachers do enjoy navigating Edline and responding to frantic emails, the jury is still out on whether those activities are necessarily a perfect replacement for sledding, snowman-making and generally, pure joy.

Because here's the thing: Snow days in Montgomery County are a big deal. They start out with the painful suspense of checking Weather Channel forecasts and refreshing the MCPS web site until Firefox crashes, and they end in bliss – you thought you would be in class, but instead, you're outside wearing nylon pants while your friends stuff snowballs down the back of your sweatshirt.

For us, snow days are much more than a simple romp in the park. They're miracles sent down by a higher snow-day power. So it follows that anything that would prevent a snow day (e-days, I'm looking at you here) would be unadulterated evil. Essentially, the e-day policy is directly opposed to all that is good in the world. In most cases, that kind of depravity is not the makings of a successful program.

Not in Montgomery County, at least. It's a little-known fact, but Montgomery County is Maryland's fun county. We don't have an LC policy. We do have the ever-hoppin' Downtown Silver Spring. We like our assessments formative, our Promethean boards calibrated and our snow days frequent. So when the snow falls, we shut down – that's just our style.

Ohio schoolteachers and officials believe that e-days will become commonplace in the next few years. All over the country, they think, students will stay in on snowy days, looking up the quadratic formula and crying into their hot chocolate. If you need a new fear to replace the worry of imminent world takeover by Voldemort, here it is.

But MoCo, I have faith. I can see it now – there's half an inch of snow on the ground, the roads are slushy and salty, and Maryland teenagers are holed up inside with the day off school. Montgomery County students are playing Call of Duty and Robot Unicorn Attack, our jubilant Facebook statuses full of jealous comments from our unlucky out-of-county friends. Our heaters are on full blast, our brains are certainly not at work, and all is right with the world.