Where have all the heroes gone?

Michael Jordan. Cal Ripken Jr. Jerry Rice. Not so long ago, it was easy for a kid to find a sports hero to idealize. He or she could turn to the sports section of the newspaper, and it would be filled with stories of last-second baskets, great receptions, solid pitching – anything and everything about the games themselves. Now turn to the sports page, and one thing dominates the section – scandal.

No one could wear the yellow jersey in the Tour de France after the leading cyclist was kicked out for missing drug tests. A star NFL quarterback was allegedly running a dogfighting ring. The MLB's most cherished record is going to be broken by a man cherished by few after multiple allegations of steroid use. A longtime NBA referee was accused by the FBI of betting on games in which he officiated. The behavior of the world's celebrated athletes and officials is disappointing at best. 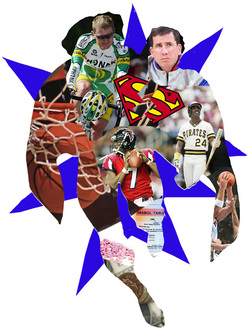 Not everyone in the sporting world is mired in such controversy, but the high profiles of the people involved have fans everywhere grimacing. Professional basketball was already losing enough viewers; the suggestion that numerous games may have been fixed isn't going to help.

It's even worse for the cycling world. Lance Armstrong had steroid rumors dog him for years, but nothing concrete was ever produced against the seven-time winner. Not so for his successors. The official winner of the 2006 Tour, American Floyd Landis, was later fired from his team after repeated testing revealed an exceptionally high testosterone/epitestosterone ratio. Tour officials no longer consider him the champion. With even more dropouts this year, many in France have given up hope for the treasured Tour. One prominent French newspaper, France Soir, went so far as to transform its front page into a mock obituary for the 104 year-old event.

But enough whining. It's time for professional leagues in this country to take charge and fix the problems plaguing their sports today. If NFL Commissioner Roger Goodell wants to keep good on his Personal Conduct Policy, he should ban quarterback Michael Vick from playing for the rest of his life if found guilty. Players should be held responsible for their behavior on and off the field, and "held responsible" should not be equivalent to a slap on the wrist. Players have had minor run-ins with alcohol or speeding before, but nothing is comparable to the electrocution, hanging and shooting of dogs that Michael Vick is indicted on.

As the NFL is having trouble with its players off the field, baseball can't even keep its players straight on the field. Unfortunately, MLB Commissioner Bud Selig can't rely on books and illegally leaked grand jury testimony to expose the league's steroid users. The drug policy instituted last year was far overdue and does nothing to punish those who capitalized on the drugs in previous years. If a court finds that star slugger Barry Bonds knowingly used steroids even once, then Selig should kick Bonds out of the league and strip him of his records.

While nothing can be done to change the outcome of the basketball games that Tim Donaghy officiated, the NBA should take measures to ensure that something like this doesn't happen again. It can start with holding its referees to the same caliber it should be holding its players. No one wants any reason to suspect the outcome of the games, and believe me, no one wants to give the diehard fan any more fodder for his theory about how his team was "robbed."

It's time for the speculation about drug use, fixed games and other misbehavior to stop. Professional sports have the ability to bring together people of all backgrounds, but it should be in entertainment, not in disgust. With the recent Hall of Fame induction of baseball players Cal Ripken Jr. and Tony Gwynn, people are longing for a different era of sportsmen. With a little help from the nation's commissioners, athletes with class can become a thing of the present, not of the past.