With 12.6 seconds left in the game, the Blazers (12-8) found themselves up by one against the visiting Vikings (11-9), well on their way to win number 13 on the season. Junior co-captain Damar Bess was at the free throw line, and Bess had already scored 10 points in the decisive fourth quarter. The crowd exhaled as Bess made his first free throw to increase the Blair lead to two. But Bess missed the second, giving the visiting Whitman squad a chance to tie or even win the game. Whitman senior Samir Kaveeshwar proceeded to hit the game winning three with just 1.7 seconds left in the game. 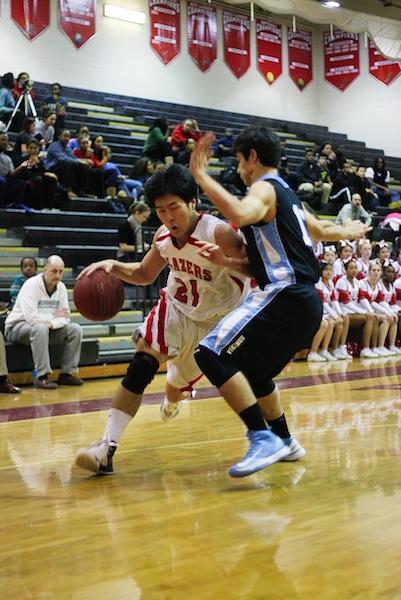 Missed free throws by Blair in crunch time came back to haunt the Blazers down the stretch. Blair leading scorer, sophomore Danny Canary, was fouled with 27.5 second to go in the game, and the Blazers up by one. But Canary missed the front end of the one and one, leaving the Vikings in good shape.

The Blazers opened up the game looking to get the ball inside, where they had a clear size advantage. Blair center Raymond Burtnick scored on Blair's first offensive possession to kick off the scoring for the home team. However, the Blazers had trouble finding their rhythm on offense the rest of the quarter, not scoring again until Canary drilled a three as the quarter was nearing its close. Canary's three left the Blazers down 8-5 after the first.

The Blazers' defense fell apart in the beginning of the second quarter, and they gave up several wide open looks inside. Whitman center Daniel Lowet was able to have his way in the paint, and he propelled Whitman to a 16-5 lead early in the second quarter. Lowet finished with a game high 20 points. Blair senior Julian Smith-Jones attributed the defensive breakdown to the Blazers' poor rebounding. "We didn't rebound nearly as well as we needed to early on," Smith-Jones said.

The Blazers clawed back into the game late in the second quarter. Flashy point guard Trey Wainwright went on a personal 4-0 run to bring the Blazers to within three of the Vikings. After a bucket by Smith-Jones, the Blazers were down just 23-22 at the end of the half.

In the third quarter, the Blazers continued to chip away at the deficit. Bess came into the game averaging almost ten points per game, but was held scoreless in the first half. That being said, Bess exploded in the second half, where he scored all 14 of his points. Bess spoke on his huge second half, "I started relaxing more on my shot," he said. "I knew I had to do something. Someone had to step up." Bess' three with seven minutes left in the third gave Blair their first lead of the game. From then on, the game would go back and forth, and would eventually come right down to the wire.

Whitman recaptured the lead early on in the fourth when eventual hero Samir Kaveeshwar hit one of his three threes to give Whitman a two point lead. But Bess answered right back with a three of his own. Bess' three started a ridiculous run in which he scored or assisted on Blair's next ten points. After the junior guard's floater put the Blazers up 44-38 with 3:26 left in the game, the outcome looked all but sealed. However, the Blazers let it slip away allowing the Vikings to eventually hit the game winning shot.