Blazers defeated due to offensive difficulties

Varsity football (1-4-0) suffered a disappointing 34-12 loss to Whitman at the latter's homecoming game. Playing in front of a sea of enthusiastic Viking fans in black and blue, the Blazers endured a crushing friday night defeat. 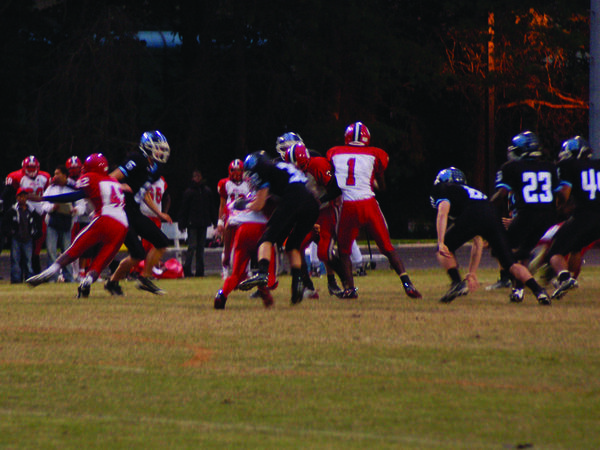 The game opened with multiple long downfield runs made by senior co-captains Abe Jarr and Andrew Gondor, but these promising moments were followed by a five-yard penalty for an illegal start, the first of many penalties to follow throughout the game.

Whitman nullified Blair's strategy of handoffs to the speedy Gondor from the start, with a solid defensive line that marked him tightly and forced him down as soon as he got the ball.

After turning the ball over on downs, and another false start by the Blazer defense, the Vikings scored their first touchdown with about two minutes left to go in the first quarter.

The Vikings' second touchdown came with more than six minutes to go in the second quarter, when a fake play pulled apart the Blair defense, allowing the Viking quarterback to send an easy pass through a gap into the end zone.

The Blazers didn't score until there was only 1:35 to go in the first half, when after a completed pass to the two-yard line by senior captain and quarterback Alex Egber, the Blair offense managed to break through the Vikings defense for a short touchdown run. After a failed two-point-conversion, the score was 14-6, with Whitman in the lead.

But throughout the second half, as the Vikings continued to score, the Blazers looked less and less animated. The only highlight for Blair in the second half was a touchdown with less than two minutes to go in the game, but it was too late to do the team much good.

Seals was disappointed with his team's performance after the game. "We stunk," he stated simply. He elaborated by saying that he blames the entire team for the loss. "There wasn't one person who stood out because everybody lost. We win together and lose together; there were just too many penalties and too many mistakes," said Seals. Senior captain and quarterback Alex Egber felt that the penalties were inevitable. "Penalties happen and they're just part of the game," he said. He added that the team put in a solid effort but was just unable to keep up with the much larger Whitman team for the full 60 minutes. "We have a very small team in numbers, and it's hard competing for an entire game. We have many players going both ways (offense and defense) and fatigue is definitely an issue,” he said.

Egber believes that the team needs to focus on the internal, rather than physical, aspects of the game in order to get better results in the future. "We need to be more focused and do the mental things right. We have been beating ourselves with the penalties and confusion in knowing what to do on every play," he says.

Despite his disappointment about last week's game, Seals is confident about Blair's ability to win its upcoming games. "We've got to take it one game at a time…every time we step on the field we have a chance," he said.