I proudly admit that I am a sixteen-year-old who still watches "Arthur," on PBS weekdays at 5 p.m. The lovable PBS children's television show is incredibly witty and offers valuable insights into life. But "Arthur" doesn't stop there. The new fall season will have an election year theme, informing kids about the presidential and local elections. 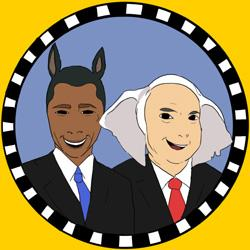 Incorporation of important issues like the election into children's television is blindingly brilliant. By bringing a fresh, kid-friendly way to update younger audiences about today's important issues, "Arthur" can get youth interested in worldly affairs beyond their television screens. If that's too idealistic, kids can at least learn a little about the elections, or be mildly entertained.

Why can't other children's shows be like "Arthur"? Hannah Montana never talks about elections or politicians. She's always bringing "the best of both worlds" - as if that can solve our economic crisis. SpongeBob, as well, is too busy living under the sea to make a real difference in society. And Barney and the Teletubbies are too busy being creepy to vote or be politically active.

It's typically the young adult and adult shows that embrace the spirit of the election. Teenage television shows, including "The Simpsons" and "American Dad" constantly update their episodes to poke fun at or teach viewers about recent issues, particularly those concerning politics. Presidents Carter, Ford, Clinton and Bush have all appeared on "The Simpsons," while the plot of "American Dad" even revolves around a stupid president. As for adults, there are always "Saturday Night Live" weekly updates to encourage viewers to learn, laugh and participate.

Children's television needs to get a move on integrating issues into their episodes that all people, especially kids, must know. From the presidential election to environmental conservation, there are so many matters that children should understand to be fully aware of the world and be integral parts of our society.

So, let's cheer when Arthur's buddy Binky learns about campaign strategies, and roll our eyes when Miley Cyrus starts opening her mouth to sing lame songs. Television should be more like "Arthur" - it's the best way to go.