Why have there been fewer emergency drills this year?

“May I have your attention please! May I have your attention please! A fire has been reported in the building,” blares the alarm system as thousands of students file into the halls and out of Montgomery Blair High School. On an unseasonably warm and sunny Friday afternoon, they stand on the field, the track and the parking lot, eager to leave campus early or return to the cooler interior of the building for a 9th period.

The most recent fire drill in February was one of only two fire drills this year, with the first one being in October. Other forms of emergency preparedness drills, such as shelter-in-place and lockdowns, have not happened once this year, in spite of violent events and threats that rocked Blair and other schools across the county. Reasons for this are mostly unclear to students and staff, especially after a violent incident in the parking lot on Nov. 9 and a shooting at Magruder High School on Jan. 23.

Security guard Darryl Cooper is part of the team that conducts emergency drills, and believes that a focus on lockdown drills would better ensure student safety. “I think we have to do less fire drills because of the need to do other drills,” Cooper says. Even though there were several serious situations and threats in Montgomery County schools this year, there were no fires within schools that warranted a full evacuation. Within this context, county and school officials largely decided that prioritizing other forms of preparation would be more practical.

Furthermore, fire drills are much more familiar and therefore less distressing for students. “Typically, most schools have been doing fire drills since elementary school so they have that in their mind… [high schoolers] should be used to [fire drills] at this point,” Cooper says. 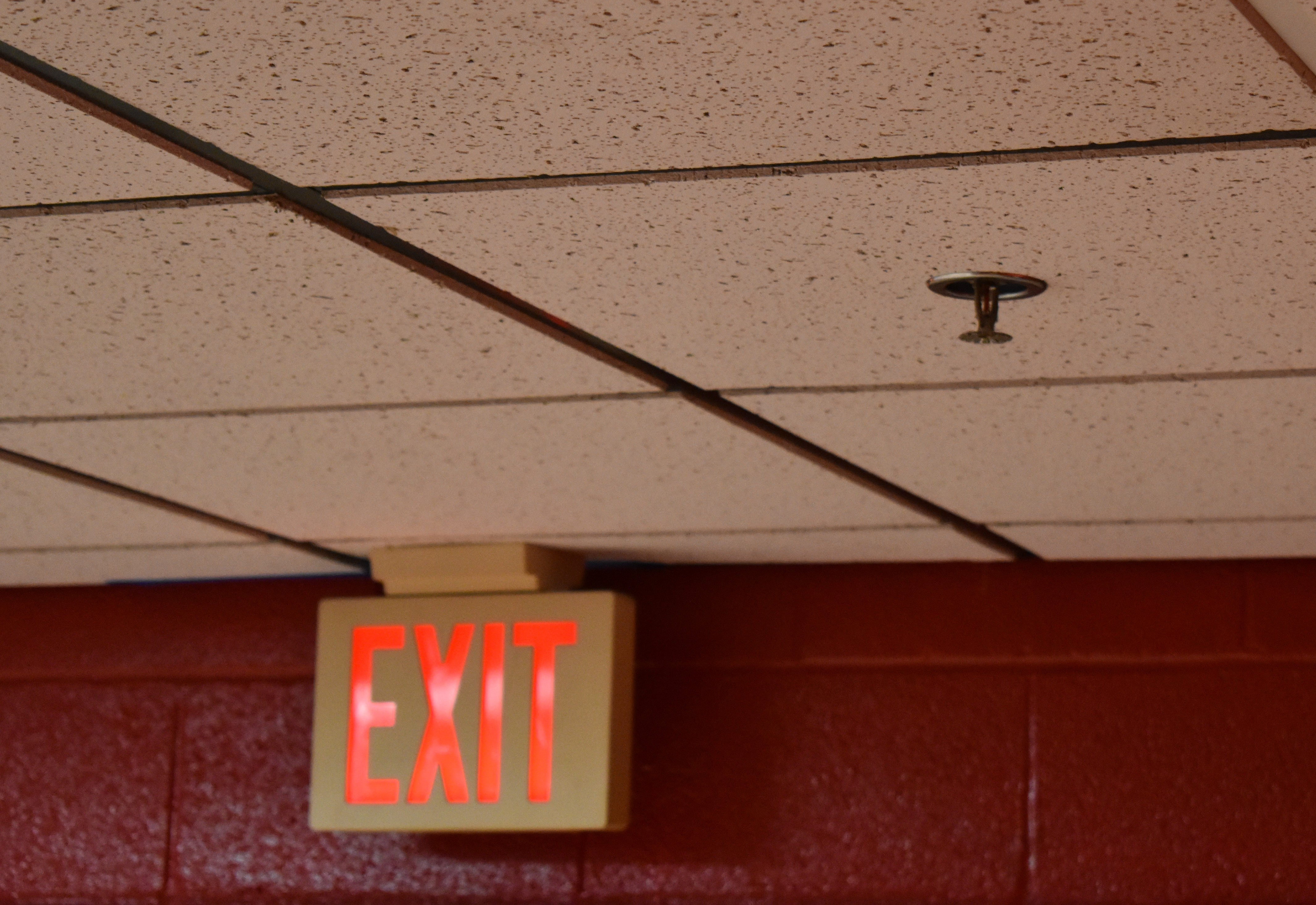 Photo: Emergency exit sign and sprinkler at the bottom of the stairwell near the SAC.

Photo: Emergency exit sign and sprinkler at the bottom of the stairwell near the SAC. Photo courtesy of Gabe Prevots.

The COVID-19 pandemic also influenced the number of drills this year and the reasons behind them. Assistant Principal Joseph Fanning is in charge of planning emergency drills at Blair. When students came back to the school building near the end of the 2020-2021 school year, he faced a difficult decision: meeting the required number of fire drills while preventing the spread of disease.

“[The number of fire drills] is a little bit less… primarily because of the Omicron variant. When that started to increase, the guidance from CDC and state was not to have large groups of people together,” Fanning says. When remaining in-person was an uncertainty because of Omicron, school administration decided it was best to take caution with large gatherings of any kind, and a decrease in fire drills was the result.

Another effect of the COVID-19 pandemic is that more students are unprepared for the size and population of Blair. “We have some students that are tenth graders that were in middle school, so there’s a big difference in size. [We have to] get students used to this building as opposed to where they were,” Cooper says. As a result, more students are less prepared for the scale of fire drills in high school compared to middle school.

Fire drills, however, are not the only type of drill that has decreased this year. The most serious and relevant incident this year in the Blair community was undoubtedly the stabbing of a student in early November. The entire school subsequently went on lockdown, and since there were no prior lockdown drills before the event, many students felt distressed and unprepared.

Junior Nina Hans was one of many students who was confused by the lack of preparation this school year. “There were no [lockdown] drills before or after the stabbing, or after what happened at Magruder,” Hans says.

Senior Abel Bekele recalls the general mood of students during the lockdown. “People were taking it seriously because they were confused and scared and word got out quickly about [the violent incident],” Bekele says.

As a result of his experience, Bekele believes students should be more prepared in case another emergency happens. “I believe we should have more lockdown drills. I think that’s more important than fire [drills],” Bekele says.

Despite the perspective of students, school security and administration state that drills are not a response to emergencies, but preparation for them. A debriefing on how the situation was handled, PTSA (Parent Teacher Student Association) meetings, staff meetings and innovation periods were all held as a reaction to the stabbing. “We feel like we’ve had a lot of information about this without necessarily having the actual lockdown,” Fanning said. Cooper reaffirmed this statement when asked why the school did not plan more lockdown drills after an actual emergency. “You can’t just do a drill because of a situation that happens,” Cooper said.

Although the unexpected lockdown caused much anxiety for students who had not practiced the situation, Cooper has a much more positive opinion of the incident given the circumstances. “We know that some things actually worked out really well as far as planning… we [had] already practiced a reverse evacuation,” said Cooper. As the security team leader at Blair, Cooper coordinates training for evacuation, lockdown, and shelter-in-place. In a reverse evacuation drill, students outside the main building have to be brought inside the building. “Just like anything else you try to practice… so that in an emergency hopefully things go right,” Cooper said.

The mental health impact of the lockdown and shooting at Magruder was not lost on school administration. Mental health was also an important factor in the decision to not have any lockdown or fire drills at the start of the school year.“We don’t want to make the kids think that there’s so much emergency going on and… get overwhelmed with the amount of drills,” Cooper said.

While this decision may have been better in the short term to avoid making students anxious during lockdown drills, it also had the effect of leaving them unprepared for a real situation, as voiced by students above. The disconnect over perception of the effectiveness of fire drills and preparedness for actual emergencies is clear: students believe a real emergency warrants more preparation in the form of more drills, while the school administration is using other ways to prepare. While administration and security are aware of the other preventative measures taken in case of emergencies, for students, those measures go largely ignored.

In the future, more frequent drills will hopefully accompany a gradual shift to pre-COVID safety in schools. “We’ll still be able to make sure we have the numbers that are prescribed over the course of the year, and [that] we don’t have the issues we did with Omicron,” Fanning says.

We have been having drills since elementary school. So while it may have been worrisome for those who say they were anxious and distressed I don't understand because we have experience from junior high and elementary school. If the admin is saying covid19 and the omicron variant caused them to have less drills, why were we allowed to protest in January? That was a huge crowd that walked out.