Think the big bad wolf, Cruella DeVille, and the two ugly stepsisters for a minute. All these characters have gone down in the history of storybooks and animation as the image of inherent evil. But is it fair to agree with this assessment without hearing their side of the story? The musical "Wicked" gives The Wicked Witch of the West from the classic book and movie "The Wizard of Oz," an opportunity to redeem her name. Hitch a ride on a flying house and take a trip down the yellow brick road of Oz to learn the truth about the infamous Wicked Witch of the West in the magical musical "Wicked."

Based on the book by Gregory Maguire, "Wicked" fills in the gaps of what was happening in Oz before and during the plot of the beloved movie and storybook unfolded. The clever plot contradicts the perception that the Wicked Witch of the West was wicked, and challenges the distinction between good and evil while poking fun at popularity and emphasizing the importance of pursuing dreams. 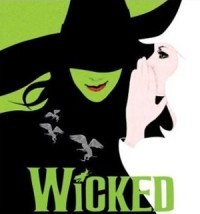 Photo: The musical poster for the Broadway hit musical "Wicked."

Photo: The musical poster for the Broadway hit musical "Wicked."

Directed by Joe Mantello, "Wicked" begins with a catchy musical number featuring the triumphant citizens of Oz, who are celebrating the defeat of their enemy, the Wicked Witch of the West. Glinda the Good, played by Christina DeCicco, appears to confirm the news. From her throne in a floating bubble, Glinda answers the question of one particular citizen who asks why the Wicked Witch was so wicked by narrating the story of Elphaba (Victoria Matlock), a talented and kind young woman, who just so happens to be green. Despite obstacles created by those who seek power for the wrong reasons, Elphaba, the true heroine, in mistaken for evil, but she proves that it will take a whole lot more than water to wash her off the map.

From the moment the curtains opened on the magnificent stage in the renovated, historic Hippodrome Theater to reveal the upper half of a particularly ominous dragon above the stage, it was clear that "Wicked" was going to be far from an ordinary musical production. The special effects, including the flight of the monkeys that sprout wings and the convincing levitation of Elphaba during the song "Defying Gravity," are as astounding as the costumes and set. 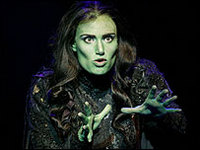 Photo: Elphaba casts a not so sinister spell in "Wicked."

Photo: Elphaba casts a not so sinister spell in "Wicked."

The quick transformation of the mutchkin Boq into the tinman, as well as Glanda's glowing gown were among a handful of simply magical attributes to "Wicked." Throughout the show, images of OZ including the yellow brick road, poppies and Dorothy's fallen house were projected on the backdrop. The show's special effects are at their finest when Elphaba ascends into the air at the peak of "Defying Gravity," a song set against brilliant lights that masked all props and illuminated her suspended figure.

The performances of the lead roles-Victoria Matlock as Elphaba,and Christina DeCicco as Glinda- however, truly make the show spectacular. Both women carry the show with strong and stylish voices. DeCicco boasts a wide range as she opens the first act with an elegant soprano, operetta in "No One Mourns the Wicked." From here, she proceeds to bring down the house with the show-stopping comical cut, "Popular," which she belts with perfect control. Matlock gives an equally stunning performance, as she particularly shines in the touching, sorrowful ballad, "I'm Not that Girl." She later captures the audience with her powerful, effusive version of "Defying Gravity" to end Act One.

Photo: Glinda and Elphaba are off to see the wizard in the Emerald City.

Photo: Glinda and Elphaba are off to see the wizard in the Emerald City.

Though their separate performances are indeed superb, the duo's interaction on stage is exceptional. Matlock and DeCicco capture the relationship between Elphaba and Glinda as they go from "deeply, truly loathing" each other to becoming best friends, as they exclaim in the blissful, harmonic song "One Short Day." The show would not have been as effective without the energy that emanated from DeCicco and Matlock when on stage both together and apart.

An extremely talented cast supports the two female leads, including Cliffton Hall, as the brainless, pretty-boy, Fiyero, who falls into an unlikely love with Elphaba. Deedee Magno Hall also delivers a convincing if brief performance as Elphaba's younger sister Nessa Rose, who is paralyzed from the waist down as a young girl and transformed into the truly Wicked Witch of the East.

"Wicked" is a timeless, energetic show, guaranteed to please men and women, good witches and bad witches. It is certain that once one enters into the land of "Wicked," one will certainly be "Changed For Good."