The girls' tennis team was left with plenty of spirit but no win on Monday, falling to county champions Walter Johnson 7-0. The more-experienced Wildcats team outplayed the Blazers with their powerful, low groundstrokes and strong volleys, leaving Blair with a 2-1 season record.

The top-ranked WJ team returned nine of 10 starters from last year's county championship squad, putting Blair in a David-and-Goliath situation. However, according to coach David Ngbea, the Blazers did not give up and fought hard in the loss. "I think that the attitude was good. I was kind of scared that they would go there and just fold up," he said.

At first singles, junior Sneha Kannan faced senior Lauren Wolman, winner of the Montgomery County and Maryland Region II singles tournaments last year. Low and powerful hits from both sides forced volleys out of bounds or into the net. However, Kannan would often hit directly to Wolman, allowing Wolman to change directions and force Kannan to scramble for the ball. After almost an hour of play, Wolman was victorious by a score of 6-1, 6-1.

Due to senior co-captain Bonnie Ding's absence, Ngbea recruited sophomore Sarah Tran at the last minute to play fourth singles against WJ's Alysia Rodgers. Tran, the 11th ranked player on the team according to Ngbea, emerged from the court with a 6-0, 6-0 loss. 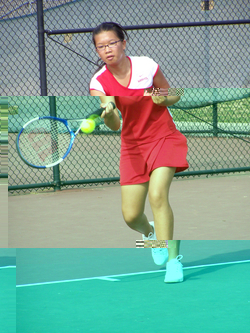 Photo: Sophomore Sarah Tran keeps her eye on the ball after a mean serve in a match against Walter Johnson.

Photo: Sophomore Sarah Tran keeps her eye on the ball after a mean serve in a match against Walter Johnson.

Doubles players fared slightly better, making some well thought-out plays. At first doubles, senior co-captain Jasleen Salwan and sophomore Deepa Chellappa took advantage of the opponents' proclivity towards standing near the net by hitting balls deep into their court. However, this would often backfire as the WJ team saved the ball and set it up for a lob or smash. Eventually, Salwan and Chellappa lost 6-2, 6-1. Second doubles players Elissa Shiau and Tiffany Chang ended their game soon thereafter, losing 6-1, 6-0. At third doubles, senior co-captain Amy Li and freshman Ann Choi were defeated 6-1, 6-3 after stretching the game to more than an hour.

Despite Blair's loss, both Ngbea and Walter Johnson coach Mary LaFratta commended their performance. "[The Blazers were] very consistent. They didn't make a lot of dumb mistakes. They just need more experience, that's all," LaFratta said.

In addition, the team impressed Ngbea with their fortitude and perseverance. "They went there confident and they did very well, despite the scores," he said.

However, the coach added that the team still needs to improve in many aspects of its game. "We've been talking about it and we need to improve volleys and serves. And today, I've realized that we also need to work on lobs," Ngbea said.

The girls' tennis team plays its next home game on Sept. 15 against Springbrook.