The boys' varsity tennis team (4-1) lost a fierce match against Walter Johnson (3-2) by a final score of 3-4. The Blazers showed their tenacity during the game to keep the score close, but were unable to pull off the win. 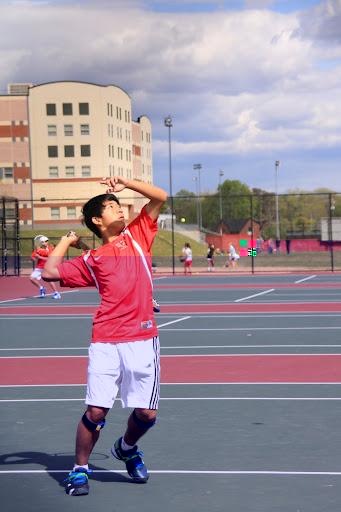 Serving can be a significant factor in winning a match, and it's what helped Blair's first doubles team, sophomore Arvind Kannan and junior Hector Barrera, win their match. "We both served well which helped a lot," Kannan said. However, first singles player, junior Daniel Chen, was not as lucky and lost his match.

Junior Myles Wagner commented that Chen was playing defensively against a tough opponent. "[His opponent] is hitting his shots really well. Chen's not playing very aggressively, he's playing more defensively, but that's kind of his playing style in general," he said.

The second singles player, Junior Daniel Barg, also lost his match. Barg explained that his lack of serving consistency contributed to the loss. "[My opponent] was playing more consistently than I was. I wasn't serving very well, so he was able to attack and get ahead in points," he said.

Despite the team's loss of four matches, the third singles duo, consisting of freshmen Eric Neyman and Nicola Dipaul, won their two sets. They swept the first set with a score of 6-0, but the second set was much closer and had to be decided by a tiebreaker. Neyman explained the differences between the scores. "In the second set they became a lot better and especially more consistent," he said.

The boys' varsity tennis team will play its next home match on Tuesday, April 17 at 3:30 p.m. against Whitman.