Wildfires are a double fault for Australia

Australia is experiencing its worst wildfires in decades, with large parts of the country destroyed since the fire season began in late July. There have been 28 deaths reported nationwide, and more than 3000 homes in the New South Wales province have been damaged or completely destroyed. Authorities are struggling to contain the flames even with international assistance in the form of firefighters and massive donations.

Despite these dangers, the Australian Open (Jan. 14 - Feb. 2) is continuing as scheduled in Melbourne. Players, including second seed and seven-time Australian champion Novak Djokovic, discussed the tournament potentially being postponed due to air quality, but tournament officials resisted. Policies against playing in extreme heat, originally designed since the tournament is played during the Australian summer, are now being adapted to protect players against prolonged exposure to unhealthy air. Officials decided outdoor play will be suspended if P2.5 (measurement for microscopic particulate pollution) exceeds 200 micrograms per cubic meter. 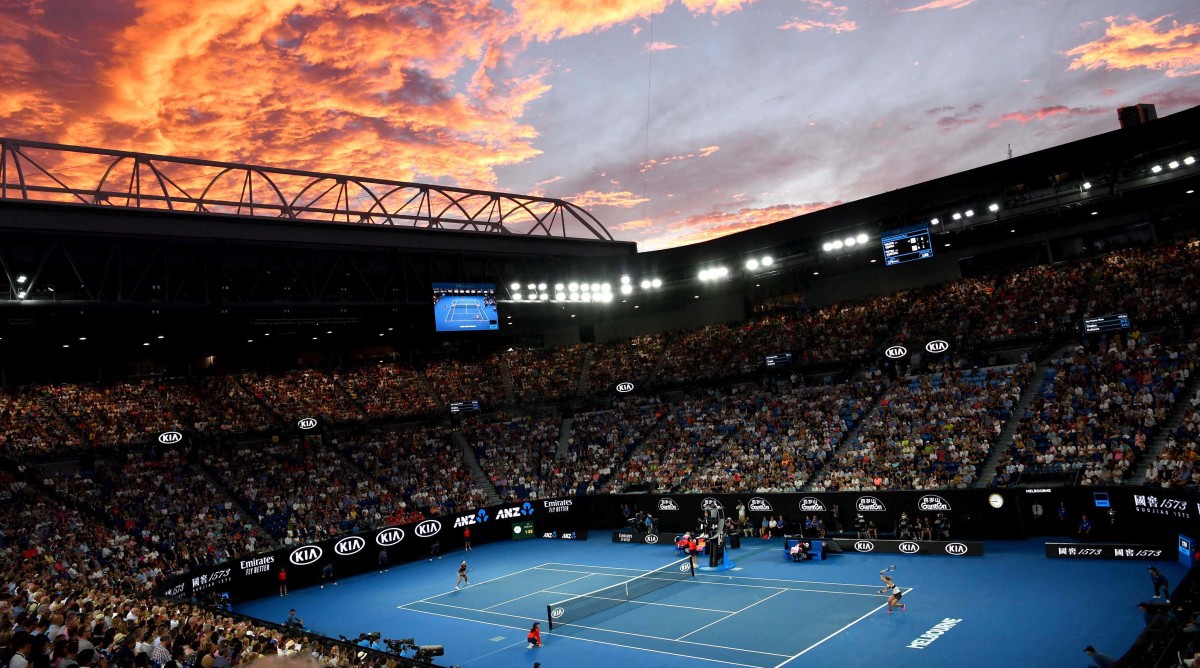 Photo: Wildfires in Australia are impacting the Australian Open.

Photo: Wildfires in Australia are impacting the Australian Open.

However exposure to polluted air, which is known to exacerbate respiratory and heart conditions, affected player performance. American player Denis Kudla, who trained in Melbourne, said he could not completely inhale or exhale without coughing during his practice on Jan. 10. Slovenian player Dalila Jakupovic, ranked 210 in the world, retired from her first round qualifying match on Jan. 13 when she began coughing and struggling to catch her breath. Some matches were postponed due to the fluctuating quality of hazardous air. In other cases, play continued despite air quality ratings of air pollution rising over 200 micrograms per cubic meter.

While air quality concerns continue, the tennis community has rallied to support Australia in their fight to contain these fires. Several Australian Open players — including Roger Federer, Rafael Nadal, Nick Kyrgios and Serena Williams — participated in a Rally for Relief bushfire charity exhibition match, organized by Tennis Australia. The match took place at Rod Laver Arena on Jan. 15 and raised roughly $3.5 million for wildfire relief efforts. Tennis Australia will also be donating $100 to the Australian Red Cross for every ace hit over the course of the Australian summer.

This initiative follows the Twitter announcement Kyrgios made on Jan 2. where he pledged to donate $200 (U.S.) to wildfire relief for every ace he hit. He lost to Nadal in their fourth round match on Jan. 27, but hit 200 aces over the course of the Open, translating to a $20,000 donation. Australian food chain Grill’d Burger promised to double his donation and Sportsbet promised $1,000 for every ace, leading to an additional contribution of $140,000.

Other tennis stars are following Krygios’ example. On Jan. 15, Nadal announced that he and Federer would donate a combined $250,000. Williams donated her $43,000 ASB (sponsored by Auckland Savings Bank) Classic winner's check to Australian wildfire victims. The Association of Tennis Professionals (ATP) donated $725,000 on behalf of the players, and the International Tennis Federation (ITF) will contribute an additional $400,000.

These player contributions will continue to support authorities in quelling fires. But, on fundamental question still remains unanswered: what will the long term effects of the Australian Open be on player health? Canadian star Denis Shapovalov took one of the firmest stances protecting his health, saying he would pull out of the tournament rather than playing in unsafe conditions. “Obviously it's a grand slam, it's a big opportunity, but I'm 20 years old. I don't want to risk my life, risk my health, being out there playing out there in these conditions, when I can for the next 10 to 15 years,” Shapovalov said.