Naked strippers, cocaine and scotch on the rocks – perfect ingredients for a thrilling movie about the New York underground. This, however, is the life of American congressman Charlie Wilson (Tom Hanks), the liberal Texan from the lone star state's second district who transformed the world and brought the Soviet empire to its knees. 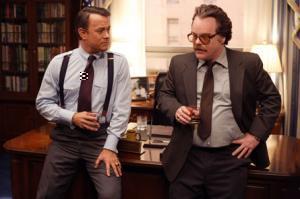 Playboy Wilson teams up with the ultra-rightwing Texas-checkbook-beauty, Joanne Herring (Julia Roberts) after he is disgusted by the lack of U.S. involvement in the war between Afghanistan's Mujahedeen and the Soviet Union in the 1980s. Wilson and Herring pull together a lineup of world leaders, covert operatives and white-bearded politicians that make up the forefront of the world's largest clandestine war. The pair mixes power and money as smoothly as one of Wilson's stiff drinks.

The alcohol is not the only thing flowing slickly throughout the film; director Mike Nichols glides his cameras flawlessly through the politiflick using creative cinematography to relay messages of power, humor and irony. Derived from George Crile's book sharing the same title, the satirical history piece is projected with thought-provoking vigor and comedic bite all at a high-octane pace. But despite the fact that it shows the noxious nature of the American stealth system, the film leaves out essential historical Cold War background.

Nichols' fastidious work balances well with Golden Globe-nominated performances by Hanks, Roberts and Philip Seymour Hoffman, who plays Gust Avrakotos - Wilson and Herring's bulldog of a partner at the CIA. The trio establishes an intriguing dynamic, bouncing quirky quips off of one another and bringing life to fascinating characters. Hanks fashions an entertaining aura capturing the eccentric nature of congress' most rowdy member, Roberts sculpts a regal image portraying Texas' sixth most wealthy woman and Hoffman masters the blunt arrogance of a fed up CIA operative – a combination which meshes three Oscar-winning actors with a clever plotline.

Charlie is a complex character who balances Washington ethics and hot tub fun while riding a roller coaster of international tension. The shenanigans of the Defense Appropriation subcommittee member go from covert to paparazzi in the blink of an eye doubling off-book budgets one second and being indicted for cocaine use in a Vegas suite the next.

While Wilson plays the centerpiece, the film's spark comes from the crude Avrakotos, a senior CIA case-officer who is not scared to break his boss' window or insult foreign dignitaries. Whether he is brokering a deal, sending Russian arms through Pakistan bought from Israel or enthralling Egypt's defense minister with a seductive belly dancer, Avrakotos spills guts with his lewd antics and coarse humor.

Combine these two skirt-chasers with the beauty of a wealthy women dedicated to a remote group in a far-off land and there is a recipe for an under-the-rug war which ends with the fall of the Soviet empire. The disheveling factor in this seemingly perfect anti-communist concoction is that out of this bullet laden, body piling mess appears the infamous Osama Bin Laden. This is where the satire steps in and the irony is unraveled. Wilson, Avrakotos and Herring have undone the United States' most formidable enemy, but in the process they have trained and armed the very terrorists who define American fear today.

After the failure of other political thrillers of the year – "Lions for Lambs," "Rendition," "Redacted" and "In the Valley of Elah" – Charlie Wilson and his hard-partying jihad squad is a refreshing change to those disheartening box office flops. Producers take note: weave together smart humor with an intent to inform and the audience will eat it up. As good ol' Charlie himself would say getting "women and booze in the same room" makes everyone "a whole lot happier." Oh yeah, and don't forget the politics.