Winning the lottery to "heaven"

She was going to a world where there was said to be a pile of gold at every corner and a stash of money at every turn. She had heard rumors that the place was not much short of heaven. But that fantasy disappeared as soon as she got off the plane and took her first steps in the United States. America is nothing like what others in Ethiopia described it to be for junior Engidawork Kita.

The lottery to another world

In 2000 Kita's family won the Diversity Visa (DV) lottery that enabled them to make the move to the United States from Addis Ababa, the capital of Ethiopia. The Diversity Immigrant Visa Program annually makes 50,000 permanent visas available to a random selection of people who "meet strict eligibility requirements [and come] from countries with low rates of immigration to the United States," according to the U.S. State Department web site.

Individuals who receive visas through the program are permitted to bring spouses and unmarried children under the age of 21 to the United States and are authorized to permanently live and work in the country, according to the U.S. Citizenship and Immigration Services web site. "Since everyone wants to come to America, it's a way of randomly picking people," Kita's friend, senior Selam Kabtiymer, says. Although Kabtiymer's family had also won the DV lottery, she and her family were able to come to the United States without the lottery's help. Kabtiymer's mother was already residing in the United States and so the rest of her family was able to get visas through her. Kabtiymer's father had applied for the DV lottery in the case they were not able to obtain visas this way. 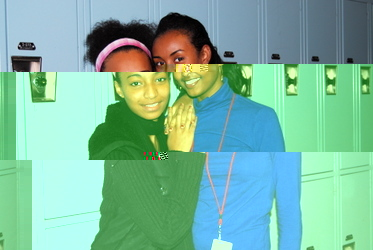 For Kita's parents, as for most others in Ethiopia, the chance to move to the United States was a dream come true. A war had been raging between Ethiopia and Eritrea since 1998 over a border conflict. Even Kita was afraid when she heard news warning the country that Eritrea threatened to attack. "I used to get scared because I don't want to die of course," Kita says.

Still, Kita's feelings towards the move were lukewarm – she wanted to experience America, but not at the expense of leaving her relatives, friends and culture behind. "You want to see what it's like to be in America," she says, but at the same time she did not want to leave.

The difficulties of the move were only compounded by Kita's limited knowledge of English. "It was hard," she says. But making Ethiopian friends in school and receiving support from teachers helped Kita adjust to the new environment. "[The teachers] were really helpful," Kita says. In addition, Kita took ESOL from fourth to ninth grade to help her get past the language barrier.

Although there was no pile of gold waiting for her in the United States, Kita sees some clear benefits of living in the country. She finds that there are more opportunities to succeed in school because there is so much support available from the education system. Even though Kita went to a free public school in Ethiopia, students still needed to purchase books and other materials on their own. It was tough luck if you could not afford them; here, public schools provide the books as well as financial help.

Kita also feels that there are more facilities available in the United States, such as easy access to computers. "There [were] no such things as computers in my school [in Ethiopia]," she says.

Kita adds that American schools are more laid back. "School is easier here…compared to Ethiopia," Kita says. She offers that this is not so much because the subjects are easier but more so because the teachers are comparatively lenient in this country.

Kabtiymer agrees that education is stricter in Ethiopia and there is much more pressure from teachers and parents. School rankings are taken very seriously and so students constantly compare themselves with others, according to her.

School here has helped Kita adapt to the American culture. But at the same time, she tries to maintain certain aspects of her Ethiopian heritage. She celebrates some of the Ethiopian festivals and eats Ethiopian food daily. Kita is also a member of the Ethiopian club at Blair and hopes to participate in the club's big show in early June, which features traditional dances, a fashion show and a drama.

Kita still misses her country at times and though she realizes that money does not come easy no matter where you are, she does not want to move back permanently. "I want to stay here now that I am used to it," Kita says. "I like it here."