Brilliant voices resonated through the school auditorium on Friday, Jan. 6. Eyes shined brightly as students in the Chamber Choir, clad in long robes, blended their voices together for the beginning of the second annual Blair Winter Choral Concert. 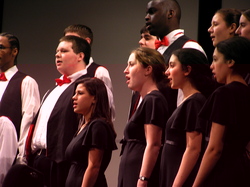 The choir appropriately began the evening with an inviting, "Se ben vedi o vita mia," which means, "I sing for you." Their melodious voices smoothly transitioned into "Las Seis Cuerdas" ("The six chords"). Afterwards, the Chamber Choir adjusted their tone for the remaining pieces – a well-known American piece, "My One and Only Love"; a lively Spanish carol from the Renaissance Period, "Riu, Riu, Chiu" and an inspiring rendition of "Don't You Let Nobody Turn You 'Round."

After the animated voices of the singers subsided, the Guitar Ensemble, a group of students in Newport's advanced guitar classes, marched on stage to perform four pieces. Although the Guitar Ensemble's numbers were much fewer than the Chamber Choir's dozens of students, the Guitar Ensemble did a first-rate job at entertaining the audience with a diverse selection of pieces, which included a 15th century French piece, "Au Joli Bois" ("In the lovely woods"), a German piece named "Standchen" ("Serenade") and the American 20th century piece, "Honeysuckle Rose." For the last piece, the Chamber Choir and Women's Choir, dressed in bright red and white robes, joined the Guitar Ensemble on stage to perform the ubiquitous and well-loved Ukrainian carol, "Carol of the Bells." 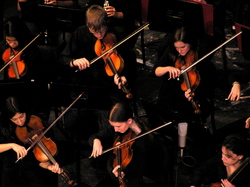 At this point in the concert, Newport announced a short intermission so that the Orchestra could prepare for their performances. Dozens of students filed on stage, dressed smartly in black, along with the Blair's Instrumental Music Director, Dustin Doyle. Under his direction, the Orchestra expertly played two pieces that they had performed a few weeks ago in their winter concert, J.S. Bach's famous "Fugue in G Minor - The Lesser" and Alexander Borodin's "Polovtsian Danses from Price Igor." The last piece, in particular, added to the evening's lightness with lively strains of melody and pleasant variation.

The highlight of the evening came at the very end when Doyle called out to both Choirs and any willing audience members to join the Orchestra on stage for "Hallelujah!" from Georg F. Handel's famous Oratorio Messiah. The evening came to a terrific end as the student singers and community members came together to animatedly perform a masterpiece.

The concert was recorded and will be available on CD.