The Blair indoor track team will begin its season this Saturday hoping to improve on last season's performance and improve the performance of new runners.

Indoor track is considered by many of those who run it as conditioning sport for cross country and outdoor track. However, this year there are many newcomers to the indoor track team, mostly Freshman who didn't run cross country in the fall. Junior captain Susanna Maisto is excited about the new members. "This year, we have a lot of new runners and there is a ton of room for growth and potential with them," she said.

Photo: Yvann Tientcheu works out on the track during practice

Photo: Yvann Tientcheu works out on the track during practice

Captains Maisto and Senior Rachel Ederer hope for strong success this year. "Last year we had a lot of people beat individual records in a bunch of events," Ederer said. "But this year, it'd be great to get in the top ten for some invitationals, which we didn't do last year." Indoor track meets include all schools in Montgomery County, so winning entire meets is difficult, but the Blair captains hope to perform the best they can. "Yeah, while winning meets is hard, we just need to work hard and perform well," Maisto said.

The season begins at the Prince Georges County Sportsplex on Saturday. Blair will be led this year by head coach Anne Mathews. Look out for the team's most experienced runners Yvann Tientcheu, Jack Murphy, Akosua Hawkins and Grace Olawuni to excel on the track this season

The Blair Swim and Dive team is revving back up with Emily Rawson remaining as head coach and Blair social studies teacher Michael Zick as the new assistant coach.

There are around 60 swimmers and 19 divers this season, according to junior Connie Ho.

Senior team captain Ethan Amitay believes that the strength of the new team, especially the new swimmers, will allow Blair to improve its standing at the state championships. "Even though we lost a strong group of swimmers last year, we have unmatched strength in our remaining and incoming swimmers," he said. "As a captain, I'm always supposed to be optimistic, but I really think this year is going to be full of success."

Senior team captain Brian Tsau, who was state champion in the 500 freestyle last season, agrees. "Blair's team has a good shot at winning state championships this year," he said.

According to Amitay, Blair's success will be, in part, due to the increased strength of the girls' team. "In the past, our womens team hadn't been strong enough to assist the mens team, but this year, we have a strong incoming girls' class so I think they will have the speed and depth to do so," he said.

In addition, the team will aim to have more individual swimmers qualify for and score in the finals of the Washington Metropolitan Championships.

According to Tsau, several younger swimmers to watch include sophomores Thomas Brown de Colstoun, Madison Waechter and Sophia Liu and freshman Hannah Kannan. "These underclassmen are already ready to win events at every meet and [can only] improve during the season," he said.

The first scrimmage was held against Paint Branch on November 29 and the first dual meet will be against Richard Montgomery on December 6.

The Girls' varsity basketball team has been working hard to prepare for the season in both practices and scrimmages. Head Coach Erin Conley has seen a lot of growth since the team was finalized, especially in their latest scrimmage against Magruder. "When I consider how well we played, I think about how much we've improved over the week. So to me it was a good performance," Conley says. 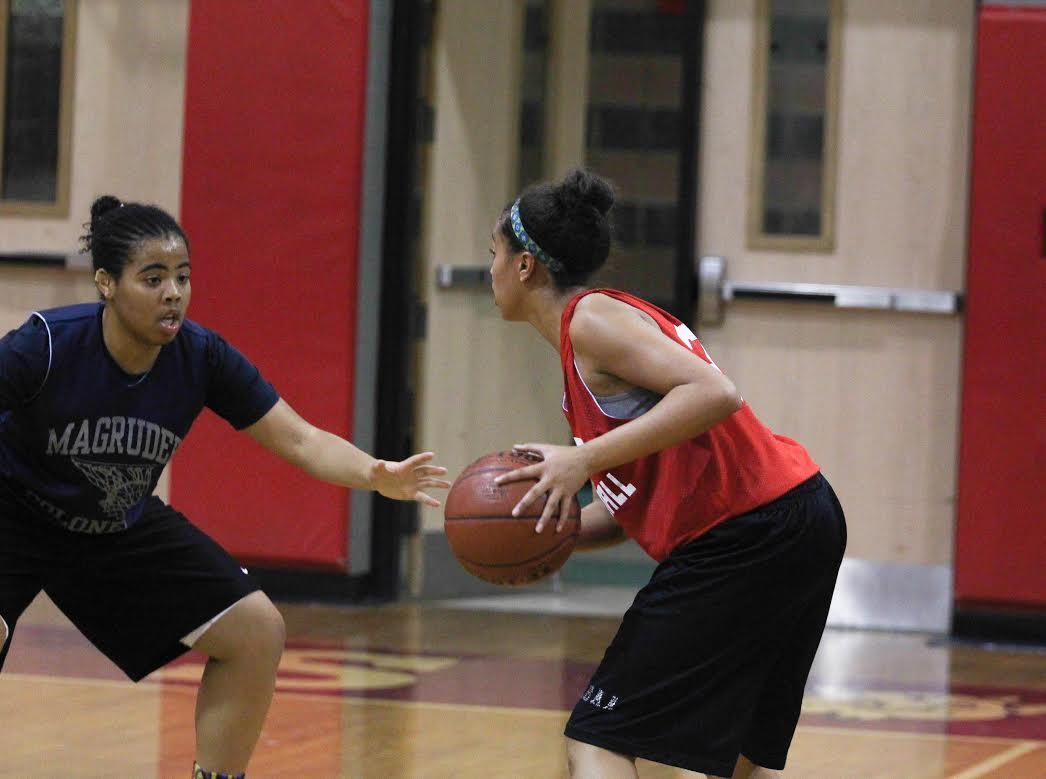 Photo: Alexis Moses faces up against a Magruder defender in a preseason scrimmage

Photo: Alexis Moses faces up against a Magruder defender in a preseason scrimmage

Going into the season, the focus will be on developing new offensive plays and strategies. "We're learning a new offense and I really want them to master the new offense and the offensive sets we've been running, and improve their game awareness and game IQ," Conley says concerning the team's goals for the season.

She believes they will come out strong and prepared for their season opener against Northwood on December 5. "I feel that we will present a good team. We'll have some offensive and defensive challenges. But at the same time, if we keep practicing and working hard, we'll be prepared for all of our opponents this year," she says.

Though comprised primarily of seniors and juniors, there is also a large number of underclassmen on the team this year as well. With a lot of talent on the team, Conley says that seniors Liza Curcio-Rudy and Breanna Camp, juniors Camille Estrin and Alexis Moses and sophomore Lauren Frost are all players to watch this season.

Coming off a heartbreaking loss to Whitman in the playoffs last season, the Boys' Basketball team is hungry to bounce back. After graduating a number of key seniors, the Blazers are looking for players to step up as leaders. Currently, the team's captains are yet to be announced.

Sporting a roster with a mix of seniors and juniors, including a couple of sophomores, Coach Damon Pigrom said,"I told the guys I need everyone to play like seniors, even the sophomores.”

The Blazers do return a key starter in senior guard Danny Canary, who has the ability to score in large amounts. Pigrom however, refused to list a specific player to watch for, "We have a lot of bounce this year, and we have a team where any one player could have a really good night.”

Pigrom said the key to success this upcoming season will be on the defensive side. "We have some guys that can score, but I think that right now, our trademark needs to be defensively,” Pigrom said.

The Blazers open up the season at home against Northwood on December 5. The team however, still needs a lot of work before then. "We've only had eleven practices as of right now, so I feel like there's still a lot that needs to be covered and worked on,” Pigrom said.