Some friendship roles are universal: the jokester, the listener, the leader. Not so common is a friend group that also has the forwards, the point guard and the captains. For best friends and senior varsity basketball players Morgan Chase, Adrienne Jackson, Johanna Lopez, Olivia Nono and Myla Sapp, friendship and basketball are inseparable. 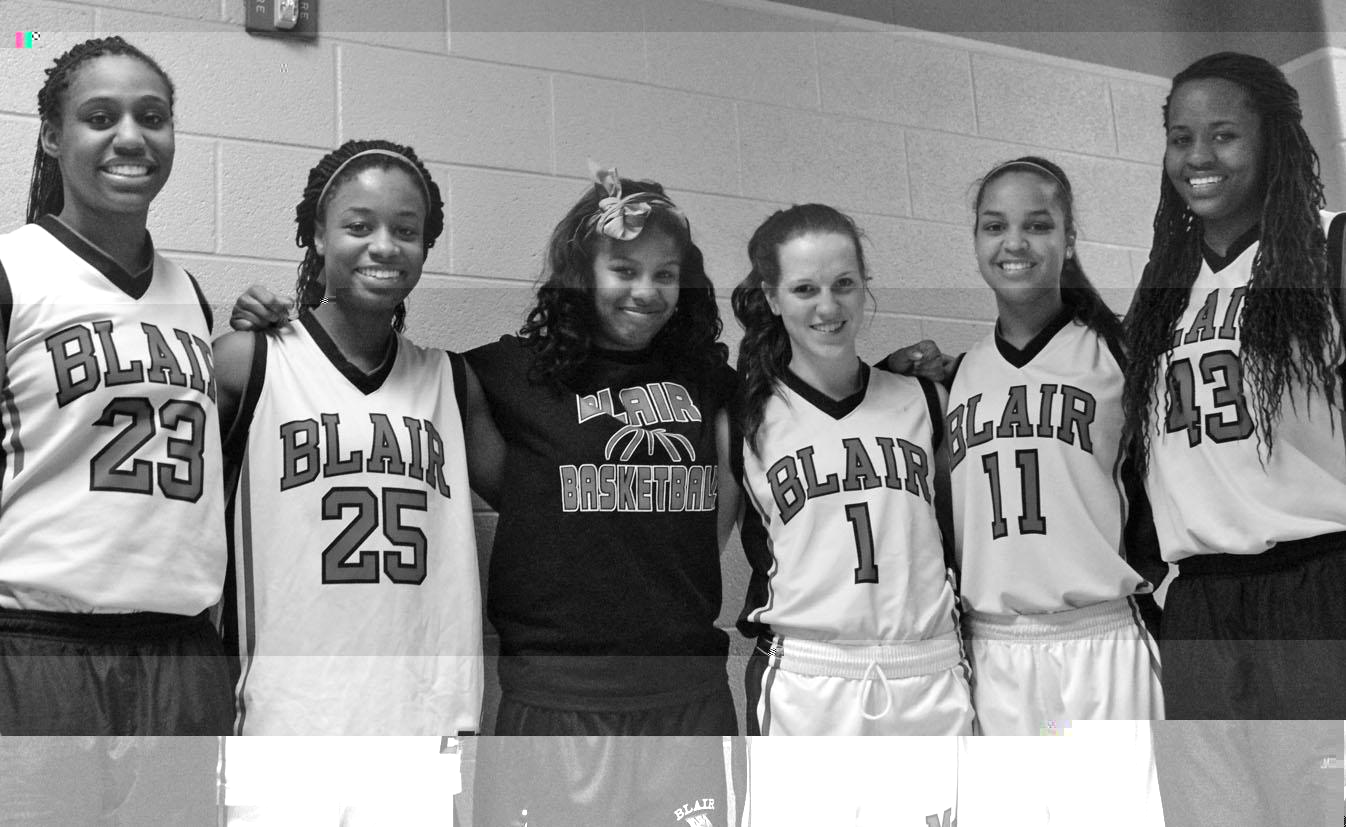 The second half of the season's first playoff game starts up. The Lady Blazers step up against Bethesda-Chevy Chase, staring them down from across the court. After a rough first half, Sapp passes the ball down the lane to Jackson, who dishes it off to Chase. Lopez, who had been out with an injury, comes off the bench and stays in for the rest of the game. With Lopez on the court, the five are back together again and move in for the big win.

Not written in any athletic rule book is the aspect of sports these Blazers value as much as their trophies and medals: the friendships that will likely outlast their days on the court.

In the summer before their freshmen year, the five were not yet close friends, but several played on a summer league together. All five girls made varsity in the winter of their freshman year, and it was at practices that they started to build their friendship.

Varsity girls' basketball coach Erin Conley says that since their involvement in 2008, the girls have drastically transformed Blair basketball with their high expectations for one another. "Before they came in we really didn't have too much of a program. They really have turned the program around and brought competitive basketball back to Blair," she says.

The five challenge each other to be better on and off the court, Chase says. It is their strong relationship, adds Nono, that makes criticism easier during games. "We are able to yell at each other and let each other know what to do and get into arguments like sisters, because at the end of the day we know it is just a game," she says.

In the first playoff game, the girls' dynamic works seamlessly. A time out is called and the girls huddle up. Even before Conley joins the circle, the five are acknowledging problems with the way they've been playing, helping the team improve their game.

Lopez says that the other players have helped her grow significantly since freshman year. "I know as a freshmen I was a baby," she says. "By them pushing me, always talking to me, keeping my mindset positive, they made me want to do better."

More than the jersey

Time spent at practice and games is only a part of the players' closeness. Chase says that since so many of the girls have abbreviated schedules this year, they spend much more of their time outside of school together. "I would say we're like family. We spend all our time together now," she says.

In four years of varsity basketball, the girls' relationship with their coach has changed as well, as they gain more responsibility and respect. Conley is grateful for the girls' leadership and says that their experience has made her job much easier.

Jackson and Conley both say that Conley's relationship with the five girls has gone beyond typical coach and team roles. "She is not only our coach but our friend," Jackson says. "We can talk with her on the court and off the court. She's a great coach that can give great advice about everything."

In the last 20 seconds of the B-CC game, with Blair up by a margin of almost 20 points, the four starters were taken off the court to a round of applause. In their place, the future of Blair basketball dribbles, passes and scores. When sophomore Maggie McClain makes a clear shot from just inside the three-point line, the crowd goes wild as they see an example of what the future will bring.

The team followed up the success against B-CC with another major win against Churchill. Last Wednesday, they were knocked out of the running by Gaithersburg.

Nono is certain that the end of high school won't mean the end of her friendship with the other four girls. "Regardless of where we are, we will always have each other's backs," she says. "I think the bonds will grow stronger as the years keep going on."