With Mike Street, it's bon appetit

Senior gets a taste of success in culinary competition

Senior Mike Street swallows nervously as he ties an apron around his waist. He surveys the immaculate personal cooking station before him, registering the raw chicken broccoli, and rice. To his right are spices, seasonings and vegetables; and to his left, cooking utensils and appliances. With one hour and 58 minutes to go, he seizes a handful of flour with one hand and a slab of raw chicken with the other, and begins the race for the title Best Teen Chef 2007.

Street was one of 11 high school seniors nominated as semifinalists in the Art Institute's Best Teen Chef Culinary Scholarship Competition at the Art Institute of Washington, D.C. in March. Street and the other finalists were selected as the top teen chefs throughout Maryland, Virginia and D.C. after submitting a picture of themselves with an entrée they each prepared. 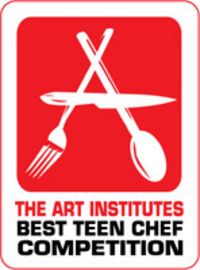 Sponsored by the Art Institutes throughout North America, the competition offers the chance for one high school senior to receive a full tuition scholarship worth $35,000 to study culinary arts at the Institutes (in addition to the title Best Teen Chef 2007).

Street says he learned the basics of cooking by observing his parents and grandparents prepare meals in the kitchen. "My dad began implementing a rule where if he cooked, I washed the dishes and if I cooked, he washed," Street says. "I hate washing dishes, so I immediately got more practice cooking."

Though he says he never considered cooking as a career, Street says a sign outside Blair's Career Center advertising the scholarship competition caught his eye, and he began preparing for the competition soon after.

Russell Garruba, a chef for six years and vice president of operations for Occasions Caterers, says that these kinds of competitions are beneficial to any aspiring chef. "For one, the competition allows you to gauge your technical skills and abilities against those of other contestants," he says. "The feedback gained from professional judges and other contestants is invaluable. It keeps you moving forward."

In the cook-off, contestants are given two hours to create three dishes with the materials and ingredients supplied. Applicants are judged not only on their final product, but also on their demonstration of knife skills, cleanliness, presentation, eye for detail and ability to make hot and cold dishes using different techniques. Most important, Street says, the judges look for the dish to reflect the chef's personality and creativity.

Though he was nerve-wracked for the competition, Street says that after a few minutes he "really got into it, and second nature took over." In a mere hour and a half, Street had created a rice pilaf, cooked chicken with a basic cream sauce, and shocked broccoli with clarified butter, onions, garlic, thyme and red wine to "bring out the different flavors," he says.

Perhaps Street's initial nerves put his skills into overdrive, as he completed his dishes 30 minutes ahead of schedule to finish first in the competition. "[The judges] praised my ability to multitask and my sense of urgency," he says. "You can't really teach someone to multitask, but it is a great skill to have in the kitchen, so they were impressed that it came naturally to me."

Garruba also values the ability to multitask and believes that a "calm, level-headed approach, with the ability to keep focused on a multitude of tasks, is crucial for success. When the doors open, it's show time. You must be ready."

After a fourth place finish and compliments from the judging panel, Street says that he learned much about himself as a chef as well as the concept of cooking as a career. "I always considered cooking as a hobby, and never something that I could turn into a profession," he says. "[Cooking] is a lucrative career, but very hard to distinguish yourself in."

A hunger for success

Street and Garruba agree that there is a growing interest in cooking amongst teens due to the Food Network and television shows like "Top Chef," which they say add glamor to the job title. Teens are also becoming more exposed, according to Garruba, to good food at home and when eating out. "[Kids] are realizing that food is a creative and meaningful way to express one's ideas and potential talent," he says.

With or without glamor, Street plans to attend the University of North Carolina at Chapel Hill in the fall, where he expects his passion for cooking to follow him wherever he goes, whether it is to culinary school or a career in the field.

Garruba emphasizes that aspiring chefs like Street should organize a plan for a future career and training. "In three years and ten years, ask yourself where would you like to be," he says. "Put it on paper, visualize it and then go for it."

Street emphasizes a simpler approach to the art. "If you just let yourself go and have fun with cooking it will all turn out well," he says.


Josie Callahan. Josie Callahan is particularly opinionated despite her small appearance. She loves everything Irish and her life is consumed by her one true love- Irish Dancing- which suits her just fine. She also adores British accents, performing, theatre, tiaras, and sparkly dresses. Josie is particularly excited … More »