It's official: Will Smith can do anything.

Quick addendum: Will Smith can do anything,assuming "anything” refers to playing cocky characters in highly entertaining films. Smith has always been good for a snarky line here, a goofy grin there. He doesn't disappoint in his romantic comedy debut, the light and witty "Hitch."

Director Andy Tennant, no stranger to the romantic comedy, surrounds Smith with a talented supporting cast and treats him to a snappy script (written by Kevin Bisch). Smith plays Alex "Hitch" Hitchens, who helps men get dates for a living. "Hitch" is a smooth-talking, self-assured, suave guy. These qualities, of course, are really the shroud around a brutal college heartbreak which has turned him into one of those guys that can't commit. Albert Brennaman (the silly yet earnest Kevin James) is, as dubbed by the big guy himself, Hitch's "Sistine Chapel." Brennaman has fallen for rich heiress Allegra Cole (Amber Valletta) who was recently cheated on by her former boyfriend, according to the tabloids. The reporter who uncovered that little tip, incidentally, is Sara Melas (Eva Mendes), who ends up being Hitch's love interest. The movie world works in not-so-mysterious ways. 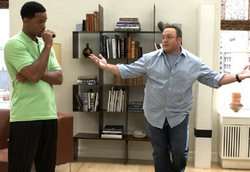 The stumblings and bumblings of the men are the driving force behind the movie's appeal. Albert faints after his first actual conversation with Angela, then shows off some hilarious dance moves, which prompt Hitch to assume the most rueful look of all time. Albert is somewhat redeemed, or at least avenged, when Hitch's own first date with Sara leads to a kick in the head and an embarrassing incident involving family secrets, with Sara on the receiving end of both. Hitch is never as vocally awkward or clumsy as the "ah, er, um"-ing Albert, due mainly to Smith's inability to be un-smooth, but after a "cook-your-own-meal" gone horribly awry (think food allergy), the dating mishaps are pretty much even between the two.

Hitch himself may seem like a substance-less man, but underneath the flashy fast-talking there's distinct moral fiber; he flat-out rejects a potential client who is only interested in the sexual side of "date-doctoring." Sara too shows flashes of a deeper, more guarded side, if only to stir the chemistry between her and Hitch in a "Look, they're similar!" kind of way.

Of course, Tennant can't entirely avoid schmaltz, which leads to the movie's weakest fifteen minutes toward the end, with Hitch in an awkward "love discovery" mode and Albert nowhere to be found. But after a few unavoidable cases of mistaken identities, a smattering of hasty judgments and a surprisingly well-done make-up scene, Tennant throws us a "leave the theater laughing" bone in the form of a hilarious dance scene finale.

"Hitch" isn't going to broaden your horizons on love or life, despite what Tennant's layered cheesiness would have you think. It isn't going to unlock the secrets of love or deepen your understanding of the human spirit. It is, however, quite entertaining.

"Hitch" (115 minutes) is rated PG-13 for language and some strong sexual references and is now playing everywhere.