They watched it happen nearly 7,000 miles away. A 9.0 magnitude earthquake, accompanied by hundreds of aftershocks, brought entire buildings to the ground, flooded the land with several tons of seawater and expunged thick, dark smoke into the air. They saw an earthquake, a tsunami and nuclear plant explosions taking place in Japan and finally absorbed the heartbreaking reality: This was happening to their home.

On March 11, an earthquake in northeastern Japan triggered a tsunami and four nuclear reactor explosions, leaving thousands of people homeless and without basic necessities. After watching the destruction of their homeland, Japanese students and teachers at Blair express hope in Japan's recovery and many are taking action and contributing to relief efforts to help their struggling country.

Juniors Shotaro Yokoyama and Takashi Oryu, foreign exchange students from Japan, experienced earthquakes at least once every few months in Japan but did not expect this particular earthquake to be so devastating. Despite the magnitude of the disaster, both were able to contact their families through e-mail to make sure they were safe. However, for Japanese teacher Yoko Zoll, connecting to family members was more difficult and took several attempts. "The phones kept ringing, but there was no answer," she says. The day was difficult for Zoll's and Yokoyama's friends and family, even though they lived far from the epicenter of the earthquake at Honshu, Japan. Yokoyama lives near Tokyo, which is about 200 miles from Honshu. He describes how a friend in Tokyo needed to stay at school until nighttime as trains and buses had been stopped to conserve energy. Zoll says her friends in Tokyo left work at 3 p.m. on that day and only arrived home the following morning, forced to walk since all public transportation was stopped.

Thankful that her family was safe, Zoll reads Japanese newspapers and watches Japanese television, and she finds it hard to watch her homeland suffering. Japanese teacher Kenneth Seat, who remembers experiencing many earthquakes when he lived in Japan, says it is especially difficult to grapple with the magnitude of the crisis. "I am glued to TV and Internet and always wondering what the latest news is," he says. "It took a couple days to sink in."

In a danger zone

Senior Wenting Ma, who lived in Osaka, Japan for nine years, remembers participating in earthquake drills, where students and staff at her school would cover their heads and duck under tables to stay clear of falling objects. She admires Japan's resistant engineering and effective earthquake warning systems but was shocked by the tsunami and reactor explosions. "I wasn't surprised by the earthquake," she says. "Infrastructure-wise and mindset-wise, Japan is trained so well."

Seat is also optimistic about Japan's ability to recover from the crisis and the reliability of the government in helping the people. He also says that the strong teamwork between Japanese people reduces problems of competition for resources. "I have faith in Japan that they're able to rebuild," says Seat. "They are really resilient and people work together and help each other."

Nonetheless, Ma is concerned about the emotional toll that the disasters will have on the Japanese people. Having moved to Osaka a few years after the Great Hanshin earthquake of 1995, she remembers how survivors still lived with the memory of the destruction it brought them. "Japanese care about their tradition in history. Any natural or human cause that causes pain never goes away; it is going to pass down," she says. "We're still talking about the earthquake in Osaka. We still see survivors talk about losing family and friends."

In spite of the lasting devastation that a tragedy like this can leave, Japanese students and teachers at Blair are trying to offset the damage by reaching out through Blair to help their country. Zoll has made fundraising for the relief effort a class goal. She shows live television from Japan that broadcasts updates on the crisis from Japan to her Japanese language students. Her students also make donation boxes in class that have a small red circle in the center, symbolizing the flag of Japan. She plans to collect enough money to send school supplies to Japan, as well as immediate needs like food and water.

Ma is taking an active role in fundraising efforts as president of the photojournalism club. 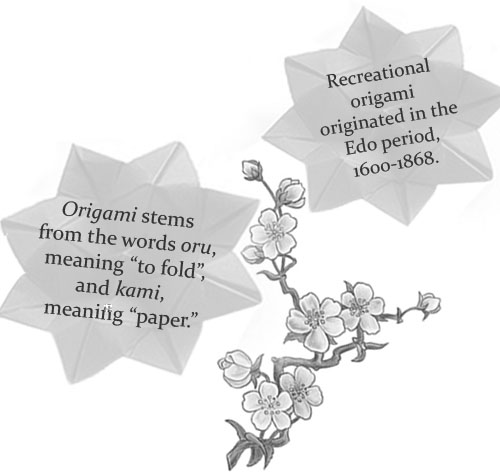 Photo:
With the club, she makes origami roses and sells them at school to raise money. "I wanted it to relate to their culture," she says. She wants to help children specifically and send money especially to those who might be out of reach of mainstream humanitarian efforts.

For Japanese students and teachers at Blair, the tragedy is devastating: The earthquake, tsunami and reactors may have done their damage faraway, but they still feel its pain. Even though the damage is distant, they hope that through their efforts, they can help bring Japan one step closer to recovery.