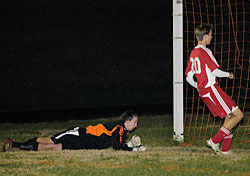 Photo: Goalie Matt McClain and defender Phillip Allen watch helplessly as a Wildcat shot finds its way to the back of the net for the winning goal, snapping Blair's hope for an undefeated season.

Photo: Goalie Matt McClain and defender Phillip Allen watch helplessly as a Wildcat shot finds its way to the back of the net for the winning goal, snapping Blair's hope for an undefeated season.

When the Blair boys' soccer team limped off the field Tuesday night following a stunning 1-0 loss to Walter Johnson, the previously undefeated Blazers emitted a mix of emotions. First, there was the anger and frustration at losing a hard-fought battle and ending their undefeated streak. Then, with reflection, came the satisfaction of one of the most spectacular regular seasons in Blair soccer history. And last, the Blazers (11-1) looked toward the future and began to mentally prepare for the postseason.

"We are ready for the playoffs. This little stumble doesn't indicate anything we need to be worried about," said head coach Adrian Baez. "A 1-0 loss against a team of this caliber is okay. We'll face them again in the playoffs."

Baez's team may indeed face the Walter Johnson Wildcats in the coming weeks, but Blair will first enjoy a week's worth of rest, which the team has earned by virtue of a first-round bye in the state playoffs. Blair is ranked second in Montgomery County, and will face the winner of this week's Damascus-Quince Orchard game next Tuesday at home. The Blazers took care of both of these potential second-round opponents during the regular season in a combined score of 13-1. 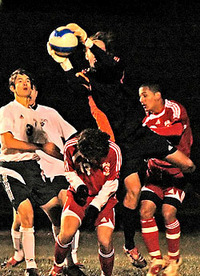 The Blazers, ranked third in the D.C. metro area last Thursday by the Washington Post, entered the last game of the regular season without the services of striker Lamboni Yendoukah, whose post-goal antics in the Blazers' win over Watkins Mill Saturday earned him a red card. Senior defender Ethan Kuhnhenn was also sidelined with a nagging hamstring injury. And within minutes of the game's kickoff, seniors Jesse Ruf and Jack Graul, both midfielders, limped off the field with injuries, while sophomore midfielder-forward Mikey Funes was helped off the field in the second half. Thus, the Blazers were left with a skeleton squad against the Wildcats.

The holes in the Blazers' lineup provided key subs with opportunities to play significant minutes in a pressurized environment. Senior Phil Allen started in place of Kuhnhenn, while Nebiat Mekonnen played nearly seventy minutes and midfielder Sergio Quisquinnay and forward Oscar Melendez played more minutes than in any other game.

Blair struggled throughout the game to put dangerous shots on goal, rarely testing the duo of Wildcat goalies that saw playing time. The Blazers had trouble keeping possession of the ball, and seemed to succumb to the sub-40 degree wind chill sweeping the field. In the first half, the Wildcats were the beneficiaries of a strong wind, and were able to control play, pressuring the Blair defense for the full forty minutes.

Walter Johnson capitalized midway through the first half, when Blair was caught flat-footed in the box. As each Blazer stood rooted to the ground, hoping that a teammate would step up and make a play, the Wildcats used a series of one-touch passes to weave the ball inside the six-yard box, setting up a point-blank strike for a wide-open forward, who netted the shot in the right corner. Senior goalie Matt McClain was left out to dry by his defense and had little chance at making the save. The goal gave Walter Johnson a 1-0 lead, which they were able to preserve for victory. 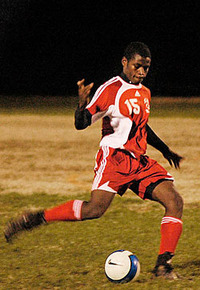 Photo: Sweeper Alex Asare-Wassow boots the ball out of the zone against the Wildcats.

Photo: Sweeper Alex Asare-Wassow boots the ball out of the zone against the Wildcats.

McClain kept the Blazers in the game with a multitude of impressive leaping saves, and senior defenders Alec McLean and Alex Assare-Wassow made strong tackles and pushed forward into the midfield, creating opportunities for the Blazers to distribute the ball down the wings. But the Blazers were unable to mount enough offense to tie the game in the second half, and thus the boys' record yielded a number other than zero in the loss column for the first time all season.

Blair's letdown last night was due in part to the energy the team poured into a 3-2 double overtime win over Watkins Mill on Saturday. After giving his team the lead early in the contest, Yendoukah ran into the stands to celebrate with the dozens of adoring Blair fans who had trekked to the Blazers' away game. Unfortunately, the striker's antics earned him his second yellow card of the match, which thus became a red card and disqualified him for the team's next game.

The Wolverines took advantage of the Blazers being a man down, and eventually tied the score at one on a second-half goal. But the Blazers fought back, and with less than two minutes to play in the game, Funes headed a high, bouncing ball over the outstretched hands of Watkins Mill's out-of-position goalkeeper to give the Blazers the lead. Unfortunately, the Blazers' excitement soon turned to dismay, as the Wolverines scored with less than sixty seconds to go, sending the game into overtime.

The Blazers, still playing 10-on-11, pressured the Wolverines tirelessly, until senior forward Matias Salinas settled the ball in the box and sent a rocket into the back of the net. Salinas' goal ended the match in a 3-2 victory for Blair and sent a mob of Blazers onto his back. The win gave Blair victories over the three most difficult opponents on their schedule (the others being Northwest and Churchill), but left Blair shorthanded for Tuesday night's match.

Blair's only loss ended the Blazers' eleven-game winning streak and disrupted the team's chances of a perfect 2006 season. But overall, Baez has been extremely pleased with the way his team has played this year, and he foresees more success in the postseason, no matter who Blair's opponents may be. According to Baez, the team is one of the tightest, most close-knit teams he's ever been a part of, and the Blazers' team chemistry"which was missing Tuesday night"is what has made them so spectacular.

"This is the best team I've ever coached, talent-wise and passion-wise," said Baez. "These guys just love soccer. They truly love the game."

The Blair boys' varsity soccer team will face Quince Orchard in the second round of the state playoff tournament at home on Tuesday, October 31. The game starts at 7 p.m.