The girls' varsity volleyball (1-3) team played laboriously against the Watkins Mill Wolverines, but could not secure a win with a score of 2-3. The Lady Blazers started steady, barely winning the first two sets 25-23 and 25-18. Although the Blazers exhibited tight teamwork and rigorous rallies, efforts derailed all the way into the fifth set. The Wolverines ended up winning 25- 19, 25-20 and 15-11 in the final three sets. 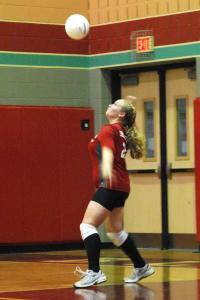 At the start of the first two sets, the Blazers showed themselves as a force on the court. But in the end, they could not compose their plays, falling apart in the last two sets. "We need to improve on not falling apart as a team," junior Kaiti Hague said. Even though he said the team started out well, coach Chris Liang said the loss was the result of continued carelessness.

Both teams started neck and neck at the start of the second set. Sloppy serves and net errors from the Wolverines and great blocks from Brown put the Blazers ahead by two points, with the score at 5-3. Consecutive out-of-bound hits from Wolverines and miscommunication allowed Blazers to widen the gap and take a 10-3 lead.

The Blazers continued their energy but the Wolverines were able to gain points on Blair's errors to cut the deficit to six points. The two teams traded points until the score was 16-9, at which point the Blazers picked it up. The Blazers exhibited great technique and teamwork to take a 23-16 lead, going on to win the set 25-18. 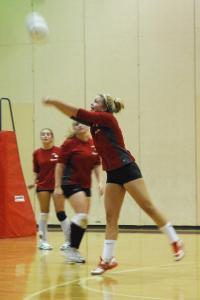 The Blazers lost momentum in the third set and struggled to compete with the Wolverines, who displayed newfound dominance and energy. The Wolverines jumped out ahead by three, but the Blazers hung in to tie the score at 8-8.
However, the Wolverines were able to create a gap as the Blazers were prone to more errors and sloppy serves. Due to dropped balls and miscommunication on Blair's side, the Wolverines took a 13-9 lead. The Blazers tried to catch up and pulled within one point with a slew of hard hits. Yet an out-of-bounds hit and missed balls by the Blazers kept them under, with the score at 19-13.

Once the Wolverines picked up the pace with hard hits and more mistakes from the Blazers, they were able to take a commanding 22-14 lead. The Blazers could not compete with the strong blocks and defense from Wolverines and dropped the set 25-19.

In the fifth and final set of 15 points, the teams once again started even at 4-4. The Wolverines were able to string together hard hits while the Blazers could not keep up, falling behind 14-11. When the Blazers hit the ball into a basketball net, which bounced onto the court, the game ended with the Wolverines winning 15:11.

"We started off really strong but lost momentum as the Wolverines gained momentum," senior captain, Caitlin Ludington said. "We couldn't counteract their momentum."

Liang knows what to have his team improve on for next game. "Improve on passing," he said.

The girls' varsity volleyball team plays its next home game on Friday, Sept. 19 against Springbrook at 6:30 p.m.