The little building is filled with surprises. Single-storied, white with a red awning, from the outside it looks like it could be a warehouse, or maybe a simple store. But its well-lit, bustling interior is filled with wheelchairs, walkers - and dogs. In the foyer, a man laughs as a dog says goodbye to him through licks and tail wags. In the main room, a train of people in wheelchairs and scooters lead their dogs in a circle around the floor. In a side room, a woman with a walker speaks to a group of teenagers about why she loves her dog so much. 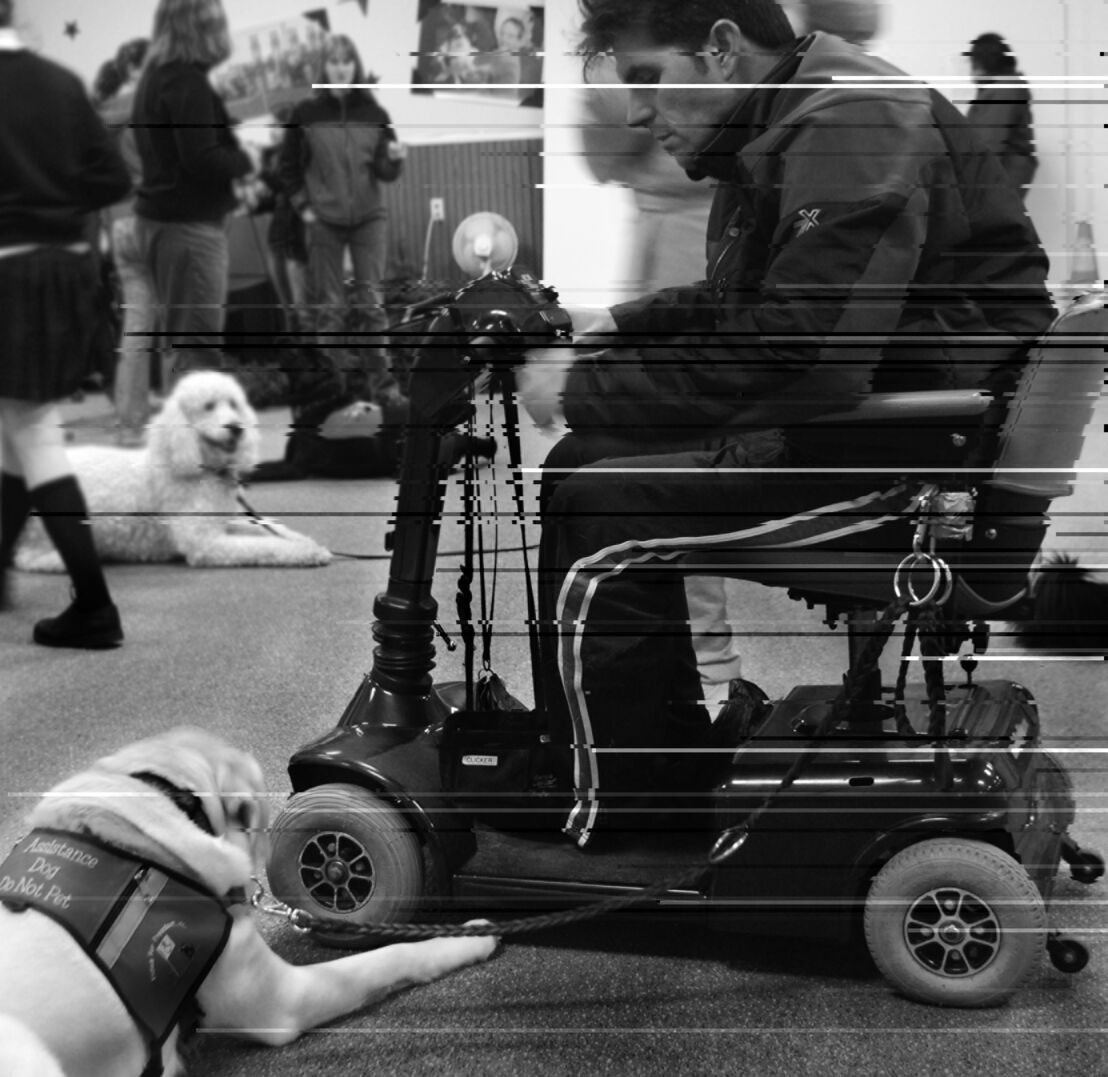 Photo: A client of Fidos, an organization that trains therapy dogs, works with his dog at a training session last month.

A client of Fidos, an organization that trains therapy dogs, works with his dog at a training session last month.  Photo courtesy of Erica Horne.

Juniors Bridget Stocker and Gabi Baylon belong in this group. Here at Fidos for Freedom, a Laurel organization dedicated to improving the lives of people in the Baltimore-Washington area through the use of trained dogs, the two friends volunteer in a program in which they train dogs for therapeutic tasks. Through their work, Stocker and Baylon have found an uncommon way to fuse their love for dogs and their desire to help people.

As the weekly training session winds down one Wednesday last month, Sylvia Zborowski, therapy dog coordinator at Fidos, rattles off data about the dogs. "We do 27 therapy visits per month - that's 27 places per month, plus five places through our DEAR program - that's Dogs Educating and Assisting Readers - so a total of 32 visits per month," she says. All told, she adds, Fidos completed over 8,000 hours of service in 2009. Fidos runs a number of programs with their trained dogs. In the DEAR program, schoolchildren read aloud with dogs to practice their skills. Another program brings puppies to a federal prison in Cumberland, Maryland, where inmates raise and train them to learn about working with dogs, says Fidos executive director Joe Swetnam. Fidos also trains two kinds of service dogs: assistance dogs, who help people with mobility or hearing disabilities, and therapy dogs, who soothe and enrich the lives of patients in hospitals or nursing homes.

Before a dog can begin visiting facilities, it must be carefully trained to be patient, calm and obedient. Through the junior volunteer program at Fidos, area teens like Stocker and Baylon help train these therapy dogs.

The girls' volunteer work at Fidos is just one part of two lives of compassion for animals. Stocker, who hopes to work in animal rescue as an adult, was inspired at the age of 5 when her aunt, Janice McLaughlin, moved in, bringing her dog Angel along with her. McLaughlin explains that while Stocker previously preferred cats, Angel inspired a new interest in dogs. "Her dog was the first dog that I really fell in love with," says Stocker.

Together, Stocker and her aunt took on several small projects to help the animals around them, including raising an injured baby mouse that was nearly killed by the family's cat. Baylon credits Stocker, her best friend since second grade, for inspiring her own love for animals. Baylon explains that animals' unconditional love and acceptance inspires her reciprocity. "Animals will always be there for you," she explains. "It makes me want to always be there for animals."

One day a month, Baylon and Stocker lose themselves in a sea of dogs. The main floor of Fidos fills with owners, patients and volunteers milling around with their canines. It falls on the volunteers to find a dog to train for the night. Once everyone is grouped off, the pairs file into the "agility room," where the volunteers lead the dogs in circles, then in figure eights, to teach the dogs to focus on their handlers' instructions.

Though the volunteers meet weekly, a "dog day" only comes once or twice a month. On the other days, the volunteers make decorations for local nursing homes and listen to Fidos' clients with disabilities speak about their lives, according to Swetnam. They also learn rudimentary dog psychology, says Baylon, including how to correct bad behavior and encourage good behavior. Some dogs respond better to fistfuls of treats, the two have learned, while others prefer an abundance of praise. "You just tell them they're the best thing in the world, and they'll respond really well," says Stocker.

Back at Fidos, a man in a wheelchair and woman leaning on a walker have gathered in a side room to tell the volunteers why they love their dogs. The teenagers listen respectfully. A deaf woman explains that since she can't hear when she drops something, her dog must pick it up for her. She drops a tissue behind her to demonstrate, and the volunteers applaud when the dog picks it up.

These assistance dogs must know a vast array of these kind of complex commands, so the junior volunteers generally do not work with them, instead training therapy dogs, says Swetnam. Nonetheless, Stocker and Baylon both feel that the exposure to people faced with a different set of challenges has broadened their perspective, whether they're listening to disabled people talk about their experiences or watching them on the floor of Fidos working with their dogs. "A normal kid might not have sympathy for someone with mental disabilities," Stocker says. "I've learned to accept people and know their struggle."

Baylon, too, says that her experiences at Fidos have taught her lessons that she can carry to other parts of her life. As a result of her work at Fidos, for instance, she sees herself in the future as a doctor helping people with disabilities. What's more, she has found that her esteem has grown for people - and animals - of all sorts. She has come to see that the people using assistance dogs can offer a different perspective. "Usually," she says, "the people with disabilities are the ones that know the most."

Over at Fidos the weekly session is wrapping up. The junior volunteers return to the main floor to watch as a woman "graduates" from the program, meaning that the dog standing beside her is now fully hers. The people scattered around the room cheer and applaud as the announcement ends, then start to say goodbye and make their way home. Dogs are barking, friends are waving, tails are wagging and smiles are spreading. The owners, clients, dogs and volunteers of Fidos go out the door and into the world to spread their message of love and acceptance.