Working through the unemployed life

They suddenly begin to laugh at themselves around the table. It's junior Sree Sinha's birthday, and her family is dining out in celebration. Though the meal is a common tradition, the Sinhas feel a bit ridiculous sitting in an upscale restaurant. "Why are we doing this?" her parents ask one another. "Neither of us has a job." But the moment of questioning passes, and the festivities continue.

Photo:
The severe recession that began in 2008 has driven the U.S. unemployment rate to its highest level in decades, recently topping 10 percent. Although many economists expect to see improvement in late 2010 and 2011, national unemployment has been on the rise. Between September 2008 and September 2009, unemployment rates in the U.S. increased from 6.0 to 9.5 percent, with Maryland's rates jumping from 4.5 to 7.1 percent in the same period, according to the U.S. Bureau of Labor Statistics. While unemployment rates in Montgomery County remain at about half of the national percentage, according to Robert Schwab, University of Maryland economics professor, the struggle is not over. "I don't think we've quite hit the bottom yet," he says. "Everyone is starting to see that." Schwab predicts that the U.S. unemployment rate will come close to 11 percent in early 2010 before it begins to fall once again. In such a dire economic climate, a situation that is often considered taboo to discuss in everyday conversation has become more and more common. Blazers like Sinha are left with uncertainty about a part of their life that they have always taken for granted: their parents' careers.

When Sinha and her sister first heard that their father would be laid off, their faces held concern and sympathy but no shock - they had seen it coming. "It really wasn't a surprise," she says. Sinha had noticed that he had lost a significant amount of work, and the whole family anticipated a point when it would peter out altogether. Her father, who had worked as a computer analyst at the National Institutes of Health (NIH) for six years, was a major contributor to the family's income, but Sinha knew that they could remain stable without his paychecks. And the adjustment period that preceded the final firing further soothed her concerns - the termination date slid from early summer to September and then to October. Up until a few weeks ago, her father would even go into his office once in a while to finish up projects. "As we had a lot of time to get used to it, it didn't feel like much of a shock," she says, "and we still had my mom pulling all of her weight."

But then came the news about Sinha's mother. She had worked as a contracted program manager for the United States Department of Veterans Affairs for three years and was upset when the job was swiftly cut off in August. "She had been working really hard, and then she was notified," says Sinha. "It was a matter of two short weeks." At the time, her father still held his job at NIH and her mother was able to develop her side job in real estate into a larger enterprise. Still, Sinha realized that the implications of this layoff were severe. The entire family began feeling the stress as the idea of a household without steady income began to set in. "She was more upset about it than my dad was [about losing his job]," Sinha says. Seeing her mother so troubled unnerved Sinha and provoked her concern as well.

Senior Michelyn Bouknight recalls a similarly vivid reaction to her own mother's job loss during that first week in mid-October. Her mother came home one day, emotional, and told her family: She would not be going back to work. Bouknight was furious that her hard-working mother had been let go from a position to which she had been recruited from an older job. And her emotions were only magnified when she realized that her mother felt partly responsible for losing the job. "I think she feels like she messed up. And she feels like she's letting us down," says Bouknight. "It's not her fault. I don't think she deserves to have to go through this situation."

Take a load off family

In order to lift some of the financial weight from her parents' shoulders, Bouknight wants to do all that she can to limit her spending. For now, the sacrifices are on a small scale: finding an alternative to an elaborate 50th birthday party for her mother, cutting back on visits to the grocery store, saying no to expensive Friday outings her friends suggest, passing up certain senior year highlights. "I'm trying not to be selfish, so I don't want to ask for money," she says.

Bouknight also believes that the situation has forced her to be more creative when it comes to hobbies that require money. "I really like fashion, and I can't go out shopping, so I have to recreate and recycle," she says. "You do what you can with what you've got."

In an ideal world, Bouknight dreams of attending Towson University, going on to get her master's degree with no loans to pay off and getting a job to support herself and her family. But the issue of paying for college is a difficult one to solve. "Tuition wasn't going to be comfortable even when she had a job," she says. "[If I don't receive] financial aid and scholarship money, I don't know what the future holds."

Senior Emmett Cummings, whose mother was fired from her administrative job as a senior employer with an architectural firm two months ago, has taken a different attitude towards his situation. He trusts that his mother will find a new job soon, so he has not yet changed his plans for the future based on her recent unemployment. "We're financially [stable] enough to be okay until my mom gets a job," he says. And while Cummings believes that his mother's unemployment will ultimately have an effect on his college choice, he says that his parents want him to go through the college process as he had intended before dealing with tuition. "I think it probably will [have an effect], but my parents haven't mentioned it too much," he says. "They're like, 'Okay, don't cross any school out until you see how much financial aid you get for it."

Unsure of how much spending money she should ask of her parents these days, Sinha has found herself in the uncomfortable dilemma of balancing practicality with the desire to continue the material experiences of her adolescence. Her parents already pay for her dance classes, Sinha says, so she felt awkward asking them for the money to be a counselor-in-training at her summer camp or even to go shopping on her birthday. "I'm a little scared to ask my parents because I know they're going to say, 'I don't know if that's the best way to use our money,'" she says. 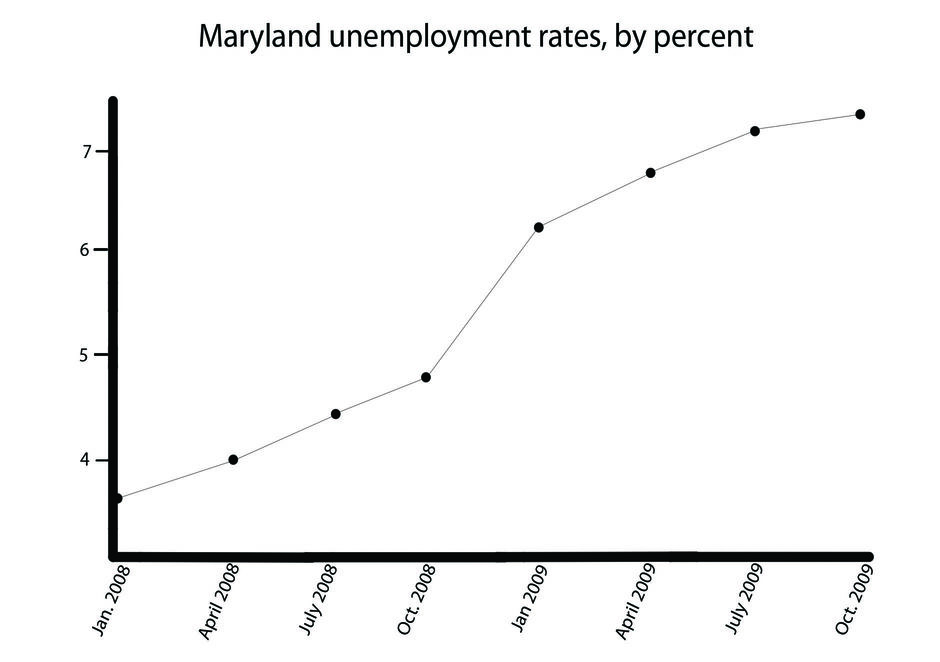 Photo:
And yet, as Sinha's family sits around the table on her birthday, they can laugh at their situation. Sinha says that this lightheartedness comes from her trust in her parents', and particularly her mother's, ability to find a new job. "My mom has that drive in her, and she has that audacity to push," she says. "She doesn't like sitting at home. She likes having that intense pressure and deadlines." And so Sinha listens intently to her mother's stories of interviews and networking, of hope and disappointment, confident that some good will come of the efforts. "I don't think she was ever really worried," she says. "I don't feel like we're in any sort of trouble yet."

According to Schwab, however, breaking back into the workforce is an extremely difficult endeavor in the current economic climate. "Once you become unemployed in this job market, it is really hard to find a job," he says. "If you lose your job right now, you have a serious problem." He suggests that men and women looking for jobs broaden their searches and take advantage of any available job, whether or not it fits their particular criteria. "Nobody can be as picky as they might once have been," he says. "We all just need to be more flexible than we normally are." Watching her mother go through the grueling process head first, Sinha has come to believe that if there is any open job out there, her mother will find it.

In spite of Sinha's faith in her parents' ability, the subject of unemployment is touchy at school. Neither Sinha nor Bouknight talks about it much with her friends. Though Sinha doesn't mind that her friends know about the situation because she does not fault her parents for their job losses, she says she generally avoids bringing up the topic in conversation because of the stigma against unemployment. "It's a little embarrassing," she admits.

And while his mother is very open about her unemployment and networking process, Cummings feels somewhat awkward talking about it in public. "She views it as the more people she tells, the more people know, the more jobs she can get," he says. "I see it as, 'Oh, wow, this is different.'" Even though the recession has slackened the social stigma against unemployment in recent months, he still feels the stigma's effects in everyday life. "It's one of those things that is kind of tabooed, and it shouldn't be," he says.

Yet Sinha is anything but ashamed of her parents. Over the years, she says, they have set an example for a dedicated work ethic. "My parents work hard, and they can support our family and a beautiful house with or without their jobs," she says. Sinha attributes her family's current stability to her parents' strong value of saving money rather than taking out loans. "They don't buy anything on credit," she says. "That's not how my parents operate…That's why we can pretty much do what we want." With this frame of mind, Sinha remains positive and holds trust in her parents' endeavors.

And Bouknight's confidence in recovery runs even deeper than respect for her parents. "Because I'm a religious person, I'm not worried," she says. "From my point of view, God took something from her only to prepare her for something better. So it's on the way." Regardless of what is on the way, she and Sinha face the challenge with utmost faith in their families and in the future.

Sidebar:
Placing her real estate business on hiatus, Sinha's mother recently left for India to take advantage of the period of unemployment. "Her reasoning is that she doesn't have a job, so she might as well go now when she doesn't have to take off from work," says Sinha. Sinha credits her mother's ability to take such a trip even in such a difficult situation to her parents' sense of fiscal responsibility, but she believes that the family should remain focused on saving money, especially now. "A plane ticket is a plane ticket, and that's a lot [of money]," she says.