Debut of G-Unit's newest member is a flop

Yayo's debut album, "Thoughts of a Predicate Felon," is a lyrical embarrassment to the Shady/Aftermath label. Banks, Buck, 50 Cent and the rest of the artists featured on eight of Yayo's seventeen uninspiring tracks outshine the rapper on his own album.

Rap mogul 50 Cent's protégé, Yayo was recently released from prison where he spent 18 months for gun possession and bail jumping. But Yayo fails to live up to the billing of the "next 50" with "Thoughts," proving he is only a Flavor Flav-like hype man and revealing he is incapable of carrying an entire album on his own. 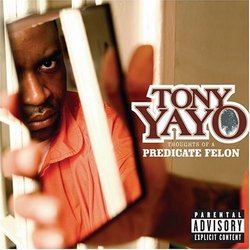 Photo:
"Homicide" and "It is What it is," the opening tracks on the album, represent Yayo's first attempt at thug appeal. The tracks have decent beats and drum programming, but Yayo's loud and raspy flow, which is probably better described as yelling in rhyme, makes him sound like he has a sore throat. Yayo's irritating voice and monotonous hooks compromise the gangster appeal he had been looking for.

Yayo disappoints again on "Tattle Teller," which features a beat similar to that of The Game's "Hate It or Love It." On "So Seductive," featuring 50, Yayo's corny rhymes and lack of imaginative lyrics ruin an otherwise tolerable song. "I can't stop thinking of the things you do/ When you freaking me and I'm freaking you/ I said the ice on my neck make the shorties stare/ Baby let me fly you in my Leer," he raps.

On "Eastside Westside" Yayo speaks in monotone through most of his verses, including the hook. Yayo adds this song to a long list of simply boring tracks, and makes his music almost insufferable with lines like "I ride through your hood and I shine like Jesus."

"Drama Setter," featuring Eminem and Obie Trice, two of the more established members of the Shady/Aftermath group, is one of the best-produced tracks on the album. "I'm a drama setter/ I don't go looking for no trouble but somehow the trouble always finds me/ Don't make me have you in the trauma center with ya mommy cryin/ 'Cuz her only son is dying" raps Eminem on the hook, which opens the song. Yayo, however, drowns out the spectacular beat with his gruff yelling, rapping, "Broke days we used to put water in our cereal, now we crossing borders just to shoot another video." The best part of the track is Trice's verse, which is refreshingly understandable and clean, something rare on the album.

The best track on the album, "We Don't Give A [Expletive]," features fellow G-Unit members Banks, Olivia and 50. Olivia provides the first R&B vibe on the album, and is a good complement to Yayo's unpolished raps. Banks delivers the best single verse on the album, rapping "Don't go tongue-lashing with Lloyd/ I'll put stabs in ya boy like Brad Pitt in Troy." The track provides a good set of strong lyrics that remind listeners of G-Unit's glory days.

"Curious," featuring Joe, and "Project Princess," featuring Jagged Edge, add an R&B sound to the later stages of the album, but neither is outstanding and both sound eerily similar. "I'm So High" is the typical commercial track found on most G-Unit albums about smoking marijuana, which turns out to be one of Yayo's best performances and a surprisingly hot track. "I be getting high, doing my thing/ So my eyes are Chinese and I'm high like Yao Ming." An oldies sample and a piano-heavy beat also add diversity to the track.

One of the most intriguing songs on the album, "I Know You Don't Love Me," featuring G-Unit, samples a Hawaiian-type beat. 50 provides another hook, and the song is one of the best on the album, but Yayo's lone verse is confusing — he mentions Eva Mendes and his drug money in the same sentence. The highlight of the song is the performances by Buck and Banks, whose verses are refreshing. Banks in particular spices up this track, rapping "I'm nicer than them Japanese cats at ping-pong" and "I hear you when you whisper/ Got the ear of Ray Charles."

Overall, "Thoughts of a Predicate Felon" is unexciting and uninteresting. Yayo lacks lyrical originality, and his debut album wavers between Yayo's attempted gangster image and his love song-singing alter ego. Yayo has yet to solidify himself as a rapper, and makes the mistake of acting as a G-Unit hype man and giving other artists the chance to outshine him on his own record. The entire album can be summed up in one song, "Love My Style," in which Yayo samples Britney Spears' "Toxic," a pop-princess song adored by teenage girls, not hip-hop fans.