Yesterday will be forgotten tomorrow

The rom-com ode to The Beatles is nothing special.

Thousands of teenage girls have dreamed about being a part of The Beatles since the group’s inception in 1960. Yesterday certainly tries to fulfill that fantasy on the big screen. However, a few too many cringey jokes, forced accidents and out-of-place celebrity appearances leave the movie falling a bit flat.

The movie starts by introducing troubled musician Jack Malik (Himesh Patel), whose only fans are his mum, his three friends and his classmate-turned-manager Ellie (Lily James). On the night Jack is about to give up his singing career, the whole world’s power goes off for 12 seconds. During this time of total darkness, Jack gets hit by a bus and knocked out.

When he wakes up, he finds it strange that none of his friends remember The Beatles anymore. Confirmed by a Google search, Jack realizes that after the power outage, all traces of The Beatles, among other famous objects, have been wiped from people’s memories.

Seizing this fantastic opportunity, Jack starts to perform all of the songs by The Beatles and dubs them as his own songwriting. He starts by playing at local cafes and slowly gains traction. He goes on to start for Ed Sheeran’s tour and move to LA to generate success and fame.

Yet, as Jack is moving up in fame, his deteriorating relationship with his long unfound crush, Ellie, and his lie-infused life, start to weigh him down. Now, Jack is left to navigate through these conflicting factors that fame brings.

The movie features classics such as “Yesterday,” “Let it Be,” “Back in the USSR” and “I Want To Hold Your Hand”. Although many potential viewers will be The Beatles fans, this movie does not seem to bring the nostalgia into the theater. 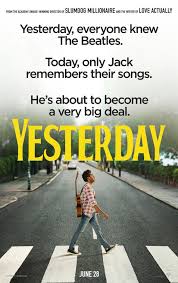 Many other elements of the movie makes it a little off-putting. The humor, although intended to be cringey, often moves away from eye-rolling into plain old confusion. The humor also seems to milk Jack’s “ugly” appearance and facial expressions a little too much.

The plot also seems to be forced and fake at times. The power outage and crash that the whole story is hinged on are not fleshed out enough, leaving viewers painfully aware of the fakeness of it all. The event seemed strange and out of place, making it obvious that it was only for the advancement of the plot. The only excuse for the major accident was a mumble about an old superstition.

Many parts of the movie almost seem to degrade The Beatles. The film tries too hard to compact all of The Beatles’ hard work and success into one overnight viral Internet story, belittling all of the hard work and struggles the Beatles had to overcome to produce these top hits. The celebrity appearances from Ed Sheeran and James Corden are an effort to make the 1960s rock band relatable to Generation Z, but only serve to bring The Beatles down to a level of generic pop music and scripted talk show hosts.

The relationship between Ellie and Jack was endearing, awkward, cute and the best part about the movie. It was like any other modern rom-com relationship, plus a little bit more. Ellie’s character helped to show Jack’s humble nature and develop one of the only conflicts in the plot.

If you are looking for a fun, modern rom-com with a dash of fun and songs by The Beatles on the side, this is the movie for you. Even if the movie is a little disappointing to a diehard Beatles fan, nobody can deny singing along to some of the world’s greatest hits. Just don’t be expected to be moved to tears or amazed. In fact, you will probably forget Yesterday tomorrow.

Yesterday is rated PG-13 for suggestive content and language and is now Playing at Regal Cinemas Rockville Center 13, ArcLight Cinemas and Rio Cinemas 18.