Record-breaking K-Pop group BTS released their new single "Butter" - how do we feel about it?

On May 21 at 12 a.m. EST, global superstars BTS welcomed the summer with their second all-English single, "Butter." Surpassing 57 million views by 8 a.m. on the day of its release, the music video doesn't lie when it promises to "pull you in like no other."

The group continues to break their own world records with their new release. For one, the music video reached 1 million likes 40 minutes before the song's release at midnight, and became the quickest YouTube video to reach 1 million likes, beating their first English release, "Dynamite," by 48 minutes. The music video also passed 100 million views in 20 hours and 54 minutes, again beating the previous global record holder, "Dynamite," which stood at 24 hours.

Following "Dynamite," a colorful disco-pop track released in the summer of 2020, "Butter" opens with a black-and-white color filter and a more refined - yet stylish - aesthetic. BTS' youngest member, Jungkook, opens the single once again, clad in a black suit that replaces his messy room and boyish style from the last English release. 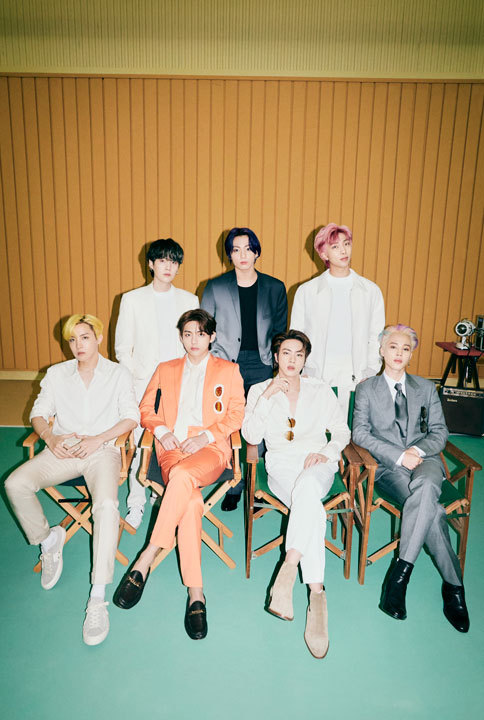 Photo: The concept photos for "Butter" were released in the weeks prior to the song (Image courtesy of HYBE Labels).

Photo: The concept photos for "Butter" were released in the weeks prior to the song (Image courtesy of HYBE Labels).

The simple, percussive baseline and sharp fashion choices show fans a sleek and classy performance style. But BTS returns to their playful side for the second chorus as they show off another '70s-inspired choreography while wearing vivid and bright tracksuits in a bright gymnasium. Addicting synthesizer solos rise to the melody for a disco-ball elevator dance break (whew!) that features each of the seven members. BTS' talented rapline covers the bridge and leads a charismatic call-and-response (while the vocalists go ham on the ad libs).

The song also brings attention to ARMY, the popular fandom of the boy group – well-known for raising one million dollars for the BLM movement, as co-writer and band member RM recognizes them in his rap verse with the lyric, "got ARMY right behind us when we say so" – the first ever mention of the fandom in a BTS song. The lyric trended on Twitter alongside the hashtags #butterworldwideparty, #buttermv, and #itssogood, as the supportive fans excitedly tweeted about their favorite parts of the song.

Like "Dynamite," "Butter" references Michael Jackson once again – specifically his popular song Smooth Criminal in the first verse of the song. The song further alludes to Usher's U Got It Bad when vocalist Taehyung sings that he doesn't need Usher to remind fans that they've "got it bad" – thanks for the reminder, Taehyung.

The song's smooth vocals and refreshing choreography are easy on the ears and eyes – a perfect recipe to please their global fandom. BTS' choice to release another summer hit with English-only lyrics and references to Western pop-culture demonstrates their dedication to their global stage. "The way we think is that everything that we do, and our existence itself, is contributing to the hope for leaving this xenophobia, these negative things, behind. It’s our hope, too, that people in the minority will draw some energy and strength from our existence," says BTS member RM to Rolling Stone.

The happy and bright vibes are perfect for vacation as the school year comes to a close, setting the scene for an exciting summer with "Butter" on repeat. BTS has once again "melted our heart into two," and we're excited to see what their next album, scheduled to release later in the summer, will bring.

Now, the only question left is – how did J-Hope manage to eat a full slice of butter at the end of the music video?

hi i love your songs happy