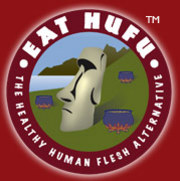 It's possible- in a manner of speaking. With the newest meat alternative on the market, "Hufu," or human flavored tofu, you can add something different to your dinner table to spice up the week. Mark Nuckols, a Dartmouth business student, has created the first ever human-flavored-anything and is selling it via his web site.

"Hufu Classic Strips" are specifically targeted for vegetarians, vegans and "cannibals who want to quit," according to the web site. But hufu is really for everyone.

"I think that for most of our customers, this is really an opportunity to experience the very fascinating, very compelling practice of cannibalism," Nuckols explained in an interview on the "Daily Show with Jon Stewart."

Nuckols conceived the idea several years ago while reading an anthropology book about food in cultures while simultaneously eating a tofurky sandwich. He realized that if the public was willing to eat something made of bean curd that tasted like turkey, an even more adventurous tofu product had business potential.

But who exactly are these people that find this intriguing alternative appealing and not nauseating? Undoubtedly there are some big fans of the Hufu Classic Strips. All 144 boxes of hufu sold out in just two days after its debut on the Dartmouth business school's campus during one of Nuckols' classes. Feedback in the guestbook section of the web site leads one to believe that America has plenty of cannibals and gourmet adventurers out there who are thankful for a legal and sinless way to fulfill their desires. One satisfied client, "Sue," writes, "What a great idea for cannibals who want to transition to a healthier and yuck-free plant-based diet!"

Blazers, on the other hand, aren't so forthcoming to the idea. In an informal Silver Chips Online survey, 92 percent of the students were grossed out by the idea and said they wouldn't dare try it. The remaining 8 percent who said they would eat it happened to be unanimously boys. Not one student in Ms. Hopkins' fifth period biology class were open to the idea. "Why would anyone ever make that?" asked sophomore Adriana Gonzalez.

When polled, most Blazers had the same initial reaction: "How do they know what humans taste like?" Nuckols has never disclosed specifics on the methods used to derive the flavor, but he confidently assures his customers that "the taste and texture of Hufu are the result of painstaking research and extensive testing in our kitchens. We are supremely confident that our food products would satisfy the tastes of even the most demanding cannibal." One of the procedures of the "research" included first account descriptions of the flavor by cannibals themselves.

If the closest you've ever come to cannibalism was sucking on your thumb as a toddler, here is how your arm really tastes. The website describes hufu as having "the taste and texture of beef, except a little sweeter in taste and a little softer in texture." Apparently, unlike all other white meats, we don't taste like chicken.

Slightly queasy or surprisingly interested? You can order your own 3.5 pounds of Hufu Classic Strips for $20.98 from the web site. The company also features several creative recipes like Hufu Stroganoff, Aztec Human Stew and New Guinea hufu dumplings that customers can make at home. If the strips don't tickle your taste buds, the site also sells several funny cannibal-inspired shirts and movies.

Humans not your thing? In a few months, Nuckols will introduce his next edible installment for purchase online: baby seal meat, "the veal of the sea."