Anyone who's had an uncomfortable situation while meeting new people can appreciate the sheer awkwardness of "I love you, man." The realistic, palpable tension and uneasy interactions between characters will have audiences laughing and wincing.

After proposing to his girlfriend Zooey (Rashida Jones), middle-aged Peter Klaven (Paul Rudd) realizes that he's never really had guy friends and that he has no one to fill in as his best man. With the help of his brother, Robbie (Andy Samberg) and his mother (Jane Curtain), Peter goes on a series of "man dates" with an assortment of oddball characters. When Peter befriends the outgoing and enthusiastic Sydney Fife (Jason Segel), he finds it difficult to be a guy's guy and a good fiancé. 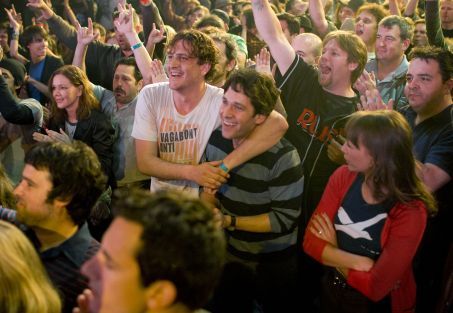 I Love You, Man

The plot progresses well and combines awkward humor with crazy and just ridiculous subplots. The eccentric characters that often find their way into Peter's life are the definite highlight of the film. From the high-pitched Lonnie (Joe Lo Trugilo) to the prickly guy friend Barry (Jon Favreau), the film can boast one of the most uniquely ridiculous character lists in recent history.

Brimming with hilariously crude and lewd jokes, "I love you, man" falls in line with the popular Judd Apatow films of the past few years (think "Superbad" and "40-year old virgin"). Surprisingly, the lowbrow producer had no hand in the creation of this movie. However, "I love you, man" resembles Apatow films in both tone and plot, ensuring that fans of his movies will surely enjoy this one.

The film is rated R, and for good reason. The amount of language and pervasive content in the film definitely keeps it from being a nice family film to see with grandparents. However, the film doesn't rely on its vulgarity for laughs and usually rises above the standards of the typical R rated raunchy movies.

The two main cast members are clearly in their element in such an outrageous comedy. Rudd and Segel, who have previously starred together in other comedies, such as "Forgetting Sarah Marshall" and "Knocked Up," share an obvious and believable onscreen chemistry as close friends. Rudd does such a good job of acting awkward, audiences will surely be squirming in their seats when he utters such weird phrases as "I will see you there or I will see you at another time" and "Totes magotes!"

Unfortunately, the rest of the movie's all-star cast is underutilized and their storylines ignored and left unfinished. With fan favorites like Samberg, Curtain, Jaime Pressly and Trugilo on the cast list, "I love you, man" had the potential to provide more laughs than it did.

Clocking in at 1 hour and 44 minutes, the film also dragged on longer than it should have. Although most of the scenes were hilarious and added to the film's overall plot, a few scenes, including a group golfing scene that didn't seem to go anywhere, seemed superfluous and definitely should have been left on the cutting room floor or saved for the DVD.

Despite its negatives, "I love you, man" will undoubtedly win audiences over. Viewers should also take special note of the film's soundtrack, which boasts songs by fairly unknown but talented artists such as Santogold and Vampire Weekend. The chill and upbeat music added to the already laidback tone of the film, creating the perfect feel for a comedy film. A simple movie with realistically painful situations, this flick should provide hours of enjoyment and lots of laughs.

"I love you, man" (104 minutes) is rated R for pervasive language, including crude and sexual references. Now playing in theaters everywhere.