Barack Obama wins with nearly 67 percent of the vote

The Blair Young Democrats club sponsored the school's first ever mock presidential primary this Tuesday through Thursday during both lunch periods on the stage in the Student Activity Center (SAC). All students were eligible to vote for one presidential candidate out of seven from the Democratic and Republican parties. The Young Democrats also held a celebration today after school to announce the results of the mock election. 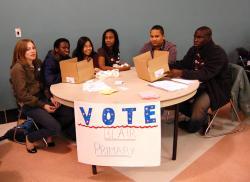 Photo: The Young Democrats arranged a mock presidential primary for Blazers to vote in.

Photo: The Young Democrats arranged a mock presidential primary for Blazers to vote in.

In total, 407 students voted by circling one candidate on a slip of paper, according to club president Lindsay Brewer. Out of the seven candidates on the ballot, Barack Obama garnered 66.58 percent of the vote, a clear majority win. Hillary Clinton was the runner-up with 14.50 percent, while John McCain came in third with 3.93 percent. Students who voted for more than one candidate on the ballot were invalidated, Brewer said. All seven candidates received votes.

According to Brewer, the Young Democrats have been planning this event for roughly a month in anticipation for Super Tuesday, when 24 states held their primary elections.

Students showed interest in the mock primary even though in previous years, students were less avid about politics, according to junior Carlos Arana, a Young Democrats member that helped voters during lunch. A member of the Young Democrats since sophomore year and a registered voter for the upcoming Maryland primary on Tuesday, Arana suggested that heavy media attention has increased student interest, especially with Democratic candidates Hillary Clinton and Barack Obama. Arana coined it "a whole revolution with Clinton and Obama."

Freeman also attributed the increased student interest to the potential candidates running for the presidency. "The message of change championed by so many candidates this season has truly resonated with the voters, promoting much greater grassroots movements, especially amongst young people," he said.