The ins and outs of the current debate

Nearly every day, the media broadcasts a news update on health care reform. Whether it's the new bill propositions or the disgruntled citizens in town halls, so many different issues at hand can overwhelm even the most savvy observer. So much information can be daunting to anyone trying to follow the reform, so here is a breakdown of the current reform proposals and debate. 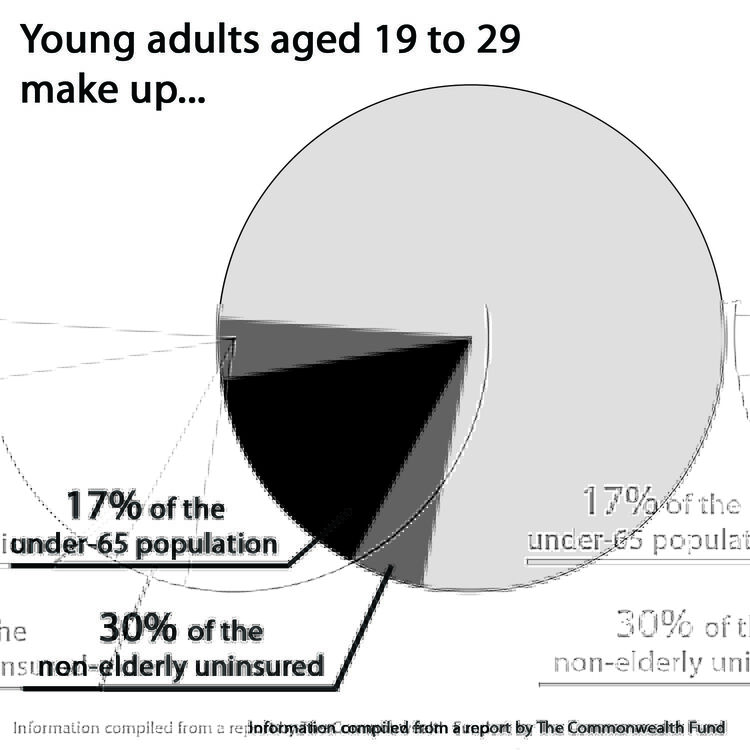 Photo:
As of mid-September, the U.S. Census Bureau estimated that 46.3 million Americans lacked health insurance for all or part of 2008, though the U.S. spends more per person on health care than any other country. In the current system, most employees receive coverage from employers, but they can purchase a private health insurance plan if their employer does not cover health insurance. They can also receive government benefits from Medicare, for the elderly or disabled, or Medicaid, for those with incomes below a level determined by individual states. Karen Davis, president of The Commonwealth Fund, a nonprofit organization working toward health care system reform, said that most of the uninsured are working people. The main reason people go without health insurance is that their employers do not offer it. While 98 percent of companies with 200 or more workers offer health care, small business owners often cannot afford it because of higher premiums. Premiums are the regular payments one makes to the insurance company so that the company can pay when something happens. The cost is usually split between employer and employee. Davis said that the workers who suffer the most are those in small businesses and those who are self-employed because premiums are higher for small groups.

President Barack Obama laid out his objectives and suggestions for reform in a speech before Congress on Sept. 9. Currently, three bills have made it past Congressional committees, and each one uses concepts similar to those laid out in Obama's speech. In the House of Representatives, the three committees responsible for issues related to health care reform each passed bills, and Democratic leaders combined the three versions into one at the end of July. In the Senate, the Health, Education, Labor and Pensions (HELP) Committee passed its bill in July, and the Senate Finance Committee released a bill in September that it will debate, amend and attempt to pass, according to a draft of a Commonwealth Fund report. While the bills have variations in provisions and cutoff numbers for certain qualifications, all based on Obama's speech, they are not key to understanding the broader issues, such as why people oppose Obama's plan or are worried about keeping their current coverage. Eventually, the Senate and House will vote and amend their respective bills until they pass one bill, at which point both legislative houses will have to reconcile their bills in a conference committee. After the Senate and the House both agree on an identical joint bill, it will go to the president for his signature or veto.

Obama's three main goals are to insure stability of insurance, provide it for everyone and slow the growth of health care costs in our country, according to Davis. In order to assure all citizens health care coverage, Obama proposed an individual mandate that would require all Americans to acquire some sort of insurance. To make sure all citizens are confident in their coverage, Davis said there are two main provisions that are included in every bill: expanding the number of people that the Medicaid program covers and creating an exchange program for buyers to shop and compare health care plans. At the same time, most of the bills would provide tax credits or some kind of aid so everyone can afford the premiums for their plans. Basically, Davis said, the goal is to provide every American with health care coverage. 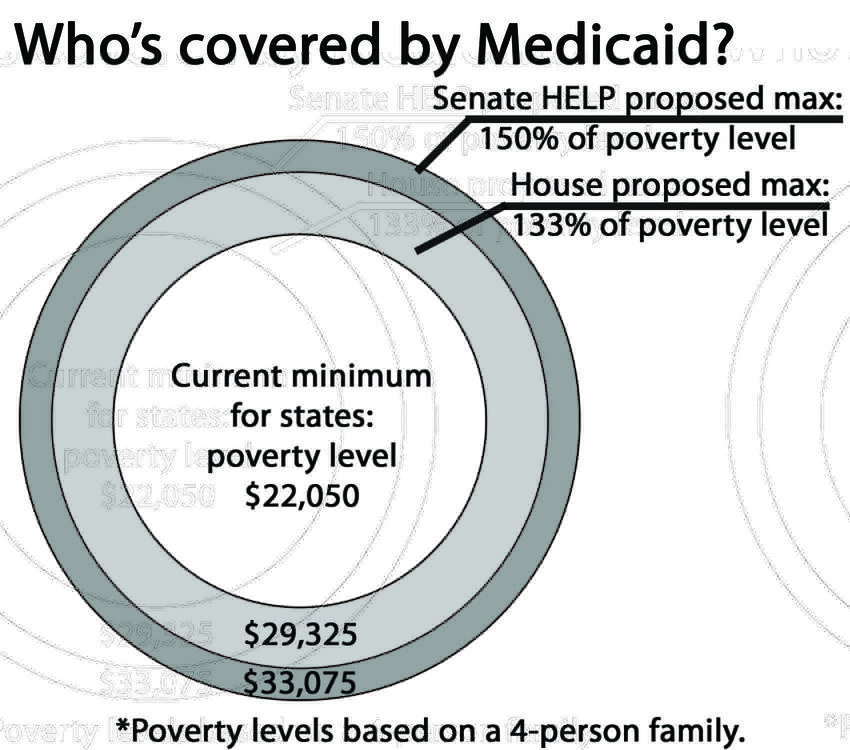 Photo:
The proposed bills would expand Medicaid coverage to include more than just citizens with incomes below the poverty line. For those who still would not qualify for Medicaid coverage, the government would provide subsidies on a sliding scale based on income. In other words, the lower a person's income, the more the government would contribute to their premium. "It picks up a portion of the premium depending on income," Davis said. Since the government would require everyone to have insurance, it is reasonable for the plan to ensure that low- to mid-income brackets have assistance, according to Gail Wilensky of Project Hope, an organization that works to bring about long-lasting improvements to health care systems around the world. She said that since there is a mandate to acquire health care, the government must help out somehow. "[Recipients of health care] will presumably receive some subsidy because now they have to buy insurance," she said.

For some, the expansion of Medicaid and the tax credits will not apply. To help people find affordable plans, the government will create a health insurance exchange for individuals to search for health insurance from individual companies and compare plans among them. Davis said that the exchange is targeted at small business owners who have to pay higher premiums for their workers. The workers and employers will then be able to search for the most advantageous plan for their situation.

Another component of Obama's proposal is the so-called "public option," which is included in the House and Senate HELP Committee bills. The public option, which according to Wilensky is one of the more controversial topics, would be a government-run insurance plan that would compete with private plans in the exchange and for employers. Obama hopes that through the public plan, comparison and competition will be able to keep insurance premiums low and affordable to increase widespread access.

To further augment the accessibility of health care, Obama has proposed consumer protections against potential discrimination by insurance companies. According to Davis, insurance companies would no longer be able to charge more to someone with a pre-existing or high-risk condition (with the exception of smokers), which can prevent the elderly or those with chronic conditions from getting the care they need. She said the companies could charge greater amounts to older age groups collectively but could not charge more to individuals based on their health status. According to Davis, the protections fall under Obama's ideas of stability and security of health insurance coverage for all citizens. "It helps make sure that no one gets left out in the cold," she said.

According to Wilensky, those who are currently insured have a stake in the plan. They want to ensure their coverage stays the same if they like it. Wilensky said that after such a tumultuous year with the economic crisis and huge build-up of the government deficit, the people who are pleased with their current coverage may not be prepared for such a revolutionary change as the public option. "There are different levels of concern being expressed right now," she said. "If you ask them, most people are satisfied with their health care. They're not sure about all this change." According to Wilensky, there is nothing explicit in any bill that changes plans of satisfied people. "In a direct way, it doesn't affect them at all," she said. However, Wilensky said there is no way to predict what employers who currently offer insurance will do. "You could see changes in the minds of the employers over what they've done in the past," she said.

Senior citizens are concerned about effects on the Medicare program. Medicare itself will not change, but Obama proposed cutting Medicare spending by reducing inefficiency to help pay for his reforms. "That has seniors worried that it might affect their access," Wilensky said. Seniors also wonder about so-called "death panels." On Aug. 11, Obama said they do not exist - the rumors must have come from a provision that would finance optional meetings with doctors for seniors to discuss the future of their health care. 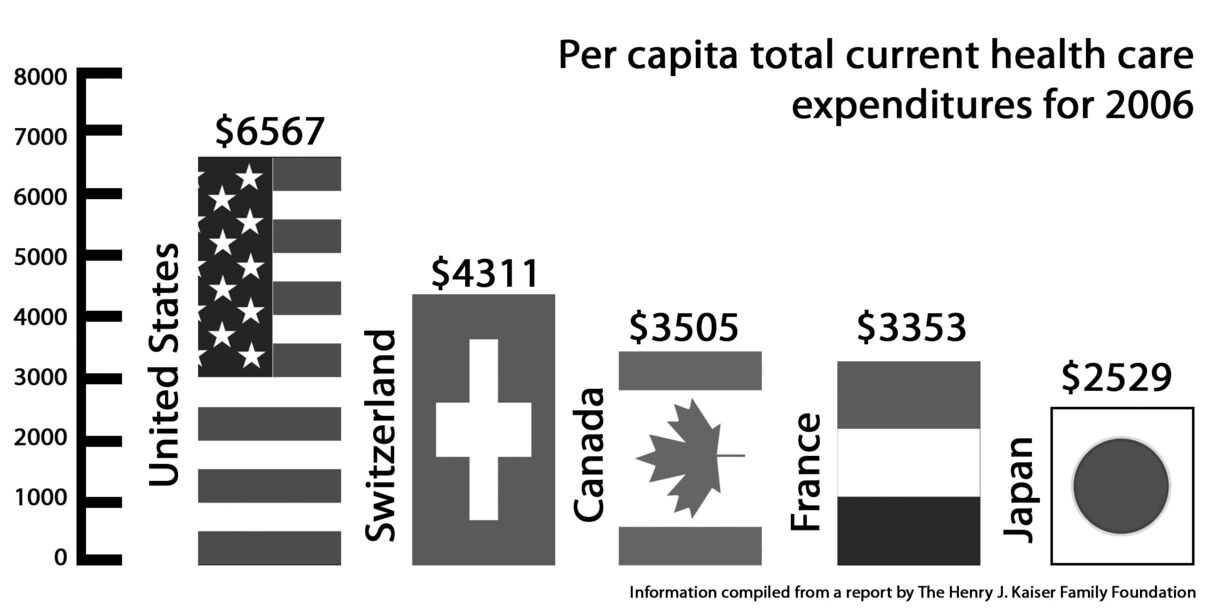 Photo:
Many wonder how a government that is already spending money on an economic stimulus package will pay for a nearly $1 trillion plan over a ten-year span. In his Sept. 9 address, Obama focused on cutting down the inefficiencies of the Medicare program, which is thought to spend more than necessary and is escalating in cost. "Medicare spending tends to grow faster than most of its financing sources," Wilensky said. She explained that historically, Medicare spending has been a huge burden on the federal budget.

Each bill, according to Davis, has other ways it plans to offset the one trillion dollars. Some bills also estimate slightly less than one trillion as the cost of their specific reforms. A popular idea among the bill-writers for generating funds for the reforms is increasing income taxes on the wealthiest bracket of the population. The House bill suggests raising taxes on those with incomes of $350,000 or more. One common idea was also to fine employers who do not pay at least part of the premiums for the health insurance of their employees. Employers will be required to provide an insurance plan, but if they do not, the revenues from collecting fines will contribute to funding the reforms as a whole, according to Davis.

Just an idea vs. a plan for action

The health care debate has been going on for months. Will it actually yield tangible results? Yes, says Wilensky. While she laments that the debate has focused more on coverage than improving the actual health care patients receive, she believes it is a step in the right direction. "I assume that if we pass a package, it will certainly expand insurance coverage," Wilensky said. "More likely than not, a substantial expansion of insurance coverage will occur over the next six months."