Your tired, poor and huddled masses

As a state that shares a border with Mexico, Arizona has had a history of problems with illegal immigrants. Illegal immigration is a complex and emotionally charged issue with no easy solution. For years, Arizona has suffered from high crime rates and drug trafficking from across the border, and recent murders of Arizona ranchers by suspected drug smuggling and human trafficking criminals has pushed the Arizona legislature and governor toward drastic action. Although there is a clear need to address immigration issues, the law signed by Governor of Arizona Jan Brewer proposes a harsh and inappropriate solution to a far more complex problem. 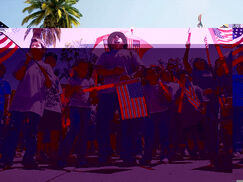 Photo: On Sunday, thousands of people gathered to protest the Arizona immigration law.

Photo: On Sunday, thousands of people gathered to protest the Arizona immigration law.

The Arizona law requires local police to question all people who they believe may be present in the country illegally, making presence in Arizona a criminal offense punishable by time in state prison. All those questioned by police are required to show documentation proving their citizenship or legal status in the country. With vague standards for mandatory police activity, the bill preaches a cure, when it creates far more problems than it solves. Unfortunately, this legislation is now gaining momentum in other states.

The immigration bill would dramatically transform race relations in Arizona. Law enforcement officials could be sued if they are seen as being too lenient in their questioning. On the other hand, the broad power given to the police is an invitation for harassment and discrimination of anyone whose skin color, clothing, behavior or choice of music could be misconstrued by police.

Another immediate effect of this legislation will be a decline in Mexican tourism to Arizona, which is currently a major source of income for the state and will fall short if Mexican citizens and other Hispanic people feel unwelcome. Targeting illegal immigrants in such a broad gesture will result in racial conflict and financial problems for the state.

Efforts to reverse the Arizona law will take place on two tracks. The Obama administration and civil rights organizations are considering taking action against the constitutionality of the Arizona provisions. At the same time, many organizations and individuals are changing their summer travel plans, boycotting Arizona and moving their meetings, conventions and vacations to states that do not enforce blatant racial discrimination. But the local popularity of the bill in neighboring states have already inspired copycat legislation, as similar provisions are under consideration in Utah and specifically Texas, where Texas State Representative Leo Berman said that he plans to introduce a similar bill. Hopefully, though, the oppressive central provisions of this bill will be thrown out in the courtrooms before it spreads to other states.