Directed and written by Jonathan Levine, "Warm Bodies" is one of the strangest interpretations of the classic tale of "Romeo and Juliet,” but also one of the most memorable and less cheesy versions I have seen. The movie does have its cheesy moments, but it's overshadowed by the comedic moments and the interesting juxtaposition between zombie-horror and romance.

Apparently eating human brains not only spares them from becoming zombies, but also gives the zombie who decided to snack on them, all of the human's memories. That is how "R" learned Julie's name, and fell for her. When he ate her boyfriend's brain, he got all of his memories. It was then when R decided to take Julie to his zombie-lair to keep her safe from the other zombies.

Although R can't talk, the audience members hear his inner monologue, which clues them in on how zombies think. Through his narration, the audience can hear R falling in love with Julie and see him becoming livelier, which causes changes in other zombies as well. When Julie finds out that R killed her boyfriend, she leaves R behind. It is up to R and "R's best friend” (Rob Corddry) to try to help R in his quest to find Julie and stop the "bonies,” skeletal zombies that are pure evil, and rid the planet of the disease for good. 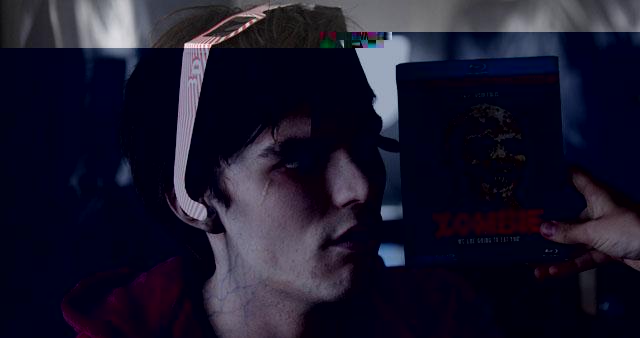 Photo: Julie comparing a blu-ray copy of "Zombie" with R.

Nicolas Hoult, aka R, puts on one of the best performances in the movie. His zombie-like acting is impeccable, and he does a great job creating a persona that seems both lifeless and animated. The film is more of a situational comedy than parody or slapstick, but the audience members can still find themselves chuckling and laughing at some of the unexpected parts. One of the funniest characters in the movie is "R's best friend,” who sets up a lot of the irony with his comical antics. For example, after trying to eat Julie, he thinks he knows more than R about women and tries to give R dating advice.

The crew did a wonderful job on the makeup because the zombies looked just how zombies would—dead. The make-up was crucial in showing R's transformation from zombie to human, which could have easily looked horrendous if the costuming was not done correctly. The special effects were also perfect, as the bonies were scary in a comical way, which fit in nicely with the rest of the movie.

Overall this is the perfect movie for any occasion: whether its date night, girl's night out, or family bonding, the quirky humor and unique love story makes this a humorous, worth-while experience. This is definitely one of the funniest boy-meets-girl-and-falls-esque movies out there. You could say it's to die for.