1. Cleveland Cavaliers: Despite the early loss to the Bulls, last seasons runner-ups are still the team to beat in the East. With LeBron, Love, and Irving going into a second year together they'll be even more experienced playing with each other. They're going to have some trouble while Kyrie Irving is recovering from last season's injury, but a more than capable supporting cast of players will find a way to step it up until he can get back. 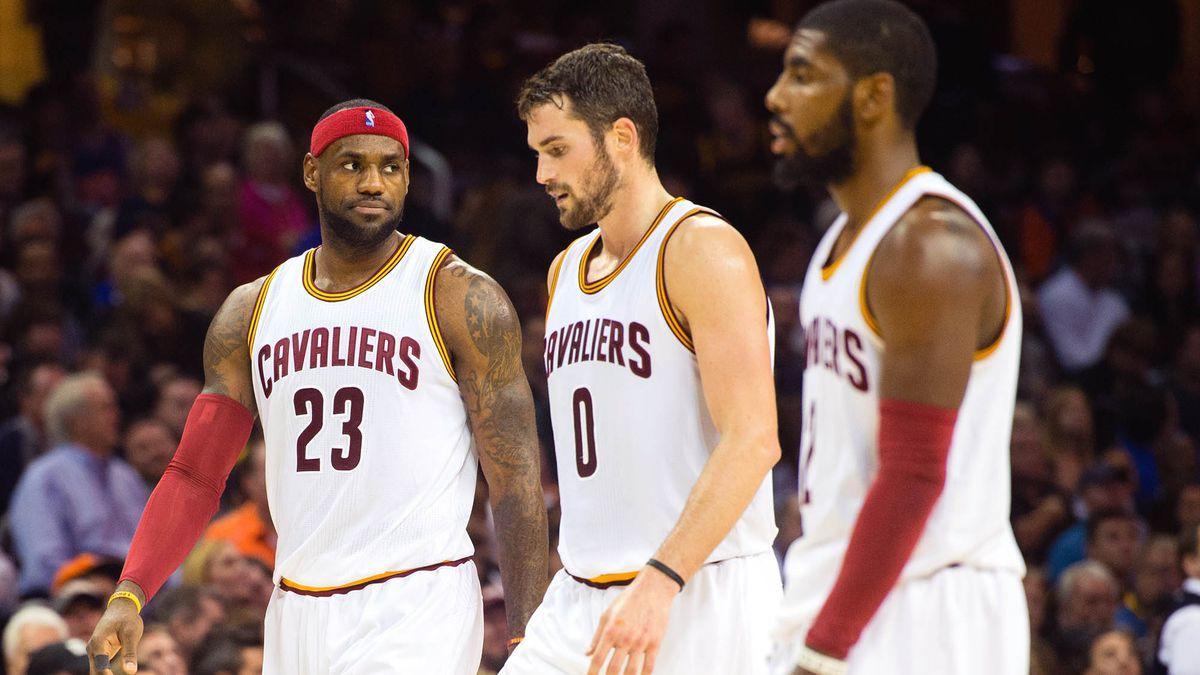 Photo: LeBron James, Kevin Love and Kyrie Irving will play together for the second year in Cleveland and are front-runners for winning the NBA Championship.

Photo: LeBron James, Kevin Love and Kyrie Irving will play together for the second year in Cleveland and are front-runners for winning the NBA Championship.

2. Chicago Bulls: The Bulls were a successful team last year despite losing former MVP Derrick Rose. Rose being back is going to be fantastic for both their offense and defense as he adds intensity and speed to the mix. Experienced big men Joakim Noah and Pau Gasol are tough to deal with on both sides of the ball in the paint.
3. Atlanta Hawks: The Hawks had their best season ever win-wise last year but lost a key player Demarre Carroll. If the Hawks can continue to move the ball around and utilize Kyle Korver's sharpshooting they should have another great season.
4. Washington Wizards: John Wall and Bradley Beal are going to make a stellar combination for the Wiz Kids this season. Wall's speed and ball handling combined with Beal's ability to shoot the ball will give a lot of defenses trouble. Otto Porter Jr. has grown as a player and had a great preseason this summer and should be a big help offensively. Not to mention Nene and Gortat, who come up big when the Wizards need it. The Wizard's biggest problem is going to be remaining consistent from game to game..
5. Toronto Raptors: Coming off a season where they had a playoff berth, this Raptors team has a lot of room to grow. The Raptors signed Demarre Carroll from Atlanta in the off-season and pairing him with Kyle Lowry should an explosive season for the Raptors offensively.
6. Miami Heat: Miami was decimated by injuries last season. This season, Bosh, Wade and rookie Justise Winslow are going to make the Heat much stronger offensively.
7. Milwaukee Bucks: Their big three of Michael Carter-Williams, Khris Middleton and Giannis Antetokounmpo (Greek Freak!) play a hyper aggressive defense which leads to a fast transition offense. The Bucks are only going to get better, and they are going to be a team to look out for.
8. Boston Celtics: The Celtics late season surge in March showed some of the team's potential. Though they don't have any franchise players per-say, they have a strong group of players who work well together and are capable of winning games.
9. Indiana Pacers: When the Pacers lost Paul George to injury last season, the rest of their team just fell apart. With the return of George in the near future, there is some hope in Indianapolis. The team needs to be aggressive offensively in his absence to be successful.
10. Charlotte Hornets: The Hornets have a fresh-faced roster featuring Jeremy Lin and Frank Kaminsky. The biggest problems for this team will be lack of three-point shooting and staying strong defensively.
11. Orlando Magic: They need to look towards Elfrid Payton and Victor Oladipo to score and help push the tempo of their game. This team could pose a playoff threat, but it won't be easy.
12. Philadelphia 76ers: Nerlens Noel and Jahlil Okafor are going to be a great pair to watch and are going to cause havoc for opposing big men. Unfortunately the rest of the team isn't as strong, giving Noel and Okafor little to work with.
13. Detroit Pistons: The Pistons have a very flexible offense that is going to rely very heavily on three-point shooting. The Pistons success is going to fluctuate depending on how hot their shooters are going to be.
14. Brooklyn Nets: The players on the Nets still need time to develop. The Nets have very little experience on their current roster and are going to struggle this season.
15. New York Knicks: Oh, Melo. Another awful season is in store for Carmelo and the Knicks.

1. Golden State Warriors: Steph Curry and Klay Thompson can set the net on fire. Add Harrison Barnes, Draymond Green and Andre Iguodala to the equation and you have a championship team. They have one of the best offenses in the game and as long as Curry and Thompson keeping hitting shots the Warriors will have another stellar season.

Photo: Steph Curry and the Golden State Warriors look to repeat their dominance from last season.

Photo: Steph Curry and the Golden State Warriors look to repeat their dominance from last season.

2. San Antonio Spurs: Sure, they're getting older but Tony Parker and Tim Duncan are always going to be championship contenders for as long as they play. Kawhi Leonard's explosiveness is going to have a bigger impact than ever on both sides of the court. The addition of Aldridge will be huge for the Spurs but he will need to work on getting into the defense oriented Spurs team.
3. Los Angeles Clippers: If there is ever a season for Chris Paul and the Clippers to go on a championship run this is it. Chris Paul and Blake Griffin are a fantastic pairing as are Griffin and DeAndre Jordan on the inside. The addition of veteran leader Paul Pierce will be a huge addition for the Clippers. As we saw last year with the Wizards the leadership of Pierce adds to a team exponentially.
4. Oklahoma City Thunder: You can never underestimate the fire power of Kevin Durant and Russell Westbrook. KD's influence is immeasurable and with this potentially being his last year in Oklahoma City, the team will be going all out to keep him there.
5. Houston Rockets: No doubt the Rockets are going to be good this season. They could be Championship good if it weren't for inconsistency on either sides of the ball. This team is going to rely very heavily on James Harden to set the tempo and help his other teammates. Dwight Howard is going to need to step-up big time as well in order for the Rockets to battle out of the stacked Western Conference.
6. New Orleans Pelicans: Anthony Davis is a beast. He's hard to stop and is going to suck defenses towards him. The rest of the team around him doesn't have much to contribute, but Davis' weaponry should keep New Orleans in the playoff hunt.
7. Memphis Grizzlies: The Grizzlies are one of the few teams in the NBA who focus on pounding the ball inside the paint, and this is going to be hard for many teams to counter defensively. The Grizzlies defense is already one of the best in the NBA and will be a key factor to making the playoffs.
8. Dallas Mavericks: The Mavs have a very versatile team this season, which can do everything from drive, to shoot from the outside. That is going to make them a hard team to defend against. On the other hand their defense isn't going to be great.
9. Denver Nuggets: The Nuggets are going to be an interesting team to watch as the season progresses. They already bested the Rockets and although it is just the first weeks of the season, expect them to surprise more teams.
10. Utah Jazz: They'll be a team that will have some exciting games and could have a big impact on the season but they are missing a key player in Dante Exum. So it will be up the rest of the team.
11. Phoenix Suns: The Suns are going to be right in the middle, good enough but not great.
12. Portland Trail Blazers The Blazers lost four of their starters over the offseason and are essentially rebuilding their team, which will make it a rough season for them.
13. Sacramento Kings: The Kings are already dysfunctional, and adding Rondo is not going to make it any better.
14. Minnesota Timberwolves: The Wolves don't have a terrible roster but the challenge for them is getting their players to work together. The development of Andrew Wiggins is the only bright spot in Minnesota right now.
15. Los Angeles Lakers: Poor, poor Kobe.