A close look at the Blair Hall of Fame's 2019 inductees

As a student at Blair, Steve Barber already stood out among his fellow student athletes. Before the world saw him wearing an Orioles jersey on the pitcher’s mound, Barber blazed through high school baseball at Blair. Old friend and former teammate Buddy Kreh ('56) reminisces about Barber's goals for high school and beyond, “His aspirations were always to be a ball player. [Growing up,] Steve wanted to play for the American Legion team [as a high schooler], which in the summertime was actually the Blair High School team playing under the American Legion banner.” Soon after graduating from Blair, Barber signed with the Baltimore Orioles, where he would spend the next seven years playing baseball.

Barber’s two-time All-Star baseball career came to a close in 1974, but he still had much to show regarding his excitement to serve society. A hero at heart, in the last couple decades, Barber has been driving buses for children with disabilities.

Mac Beasley graduated from Blair in 1957 and went on to study physics at Cornell University. After earning a Ph.D. in engineering physics at Cornell, Beasley accepted faculty positions at Harvard University and subsequently at Stanford University, where he eventually became the Dean of the School of Humanities and Sciences. 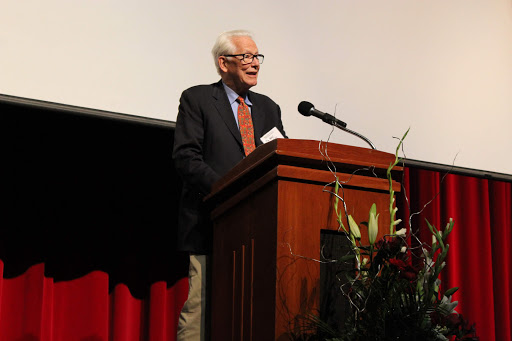 Photo: Mac Beasley reminisces about his passions at Blair (courtesy of Nathalie Molina).

Photo: Mac Beasley reminisces about his passions at Blair (courtesy of Nathalie Molina).

Beasley’s early Blair life was hardly academically centered. He was involved in many extracurriculars such as student council, drama, Masque and Gavel and Library Club. But basketball was Beasley's true passion as a Blazer. He played on Blair's team for three years and was named an All-Metropolitan player in his senior year.

Accepting his induction, Beasley reflected on how he found his true passion for physics late into his high school years. "It was not until my senior year at which point I took my first physics course. [My teacher] definitely stimulated my interest in physics. I think he awakened the inner nerd in me," Beasley says.

When his rigorous college classes interfered with basketball practice, Beasley chose to pursue academics rather than continue with sports. His physics focus drove him down a long but rewarding path of success, culminating in his position as President of the American Physical Society in 2014.

As the first female Police Chief of the Montgomery County Police Department, Carol Mehrling smashed through barriers both while at Blair and in the workplace. Her brother, Ken Mehrling, accepted her induction in her memory, describing her life in and outside of high school. 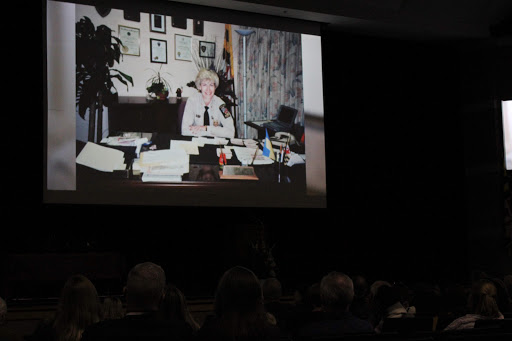 Photo: Carol Mehrling was appointed Chief of Police in 1995 (courtesy of Nathalie Molina).

Photo: Carol Mehrling was appointed Chief of Police in 1995 (courtesy of Nathalie Molina).

As a Blazer, Mehrling was both studious and spirited with her investments in countless volunteer activities and clubs, which foreshadowed her future in public service. She participated in the National Honor Society and in the Dance, Safety and Homecoming Committees, all while never failing to show her school pride at Blair sports events.

After her graduation, Mehrling’s father, a police radio dispatcher, submitted Mehrling in a scholarship competition from the County Police, which she won. This set up the rest of her education and training at Montgomery College and Towson University. Upon joining the MCPD, Mehrling quickly flew up the ranks, earning the position of Chief in 1995.

Throughout her achievement in the Police Force, Carol Mehrling’s positive mindset set her apart from everyone around her. “I think my sister would want me to end by passing this message on...fight for all you believe in and create it… and everyone deserves a hug, especially from the chief,” concludes Ken Mehrling.

Class of 1968 inductee Eliot Pfanstiehl's accomplishments are exhibited in the Music Center at Strathmore in North Bethesda, a nonprofit multi-disciplinary arts center that hosts multiple performances of both renowned artists and local ensembles daily.

From its high, sloping ceiling designed for clarity and reverberation to its iconic walkway featuring glowing rainbow lights, Strathmore is known for its breathtaking design and acoustics. This can be greatly attributed to the efforts of Pfanstiehl, founder and former CEO of Strathmore.

Pfanstiehl dedicated most of his adult life to developing and holding leadership positions in performing arts programs, including the Montgomery County Arts Council, the League of Washington Theatres, Friends of the Kennedy Center, the Maryland State Arts Council and Maryland Citizens for the Arts.

His devotion to Strathmore and performing arts in general stems back to his musical experiences at Blair's former Wayne Avenue campus. "The reason I built Strathmore was because, in my day, Blair did its musicals in the gymnasium. Do you know what the acoustics are like in a gymnasium?" Pfanstiehl asks as he addresses the audience in the newly developed Alumni Hall, also known as Blair's auditorium.

Pfanstiehl states that Blair was a large influence on him as a person. "It [Blair] shaped us and made us who we are. Just like us, you have been shaped by this place. Your ethics have been shaped, your sense of fairness, justice, honor, righteousness came in some way from the hundred conversations you had right here at Blair," Pfanstiehl says. "Thanks Blair, you done good."

One of the best basketball players in Blair history, Brian Magid led the Blazers to victory before graduating in 1975. During his senior year, he led the basketball team in scoring, securing them the County and State Championships.

Magid described how the Blair sports environment was one he could never forget. “There was nothing like playing with your friends, your family, at our school, in that intimate fanatic-packed Blair fieldhouse. Everything about those years at Blair with basketball has left great memories," he remembers.

Magid’s stellar basketball performance extended far beyond high school as he dominated the court on George Washington University’s team in his senior year and led the nation in free throws. Though the Indian Pacers drafted him for their team, Magid ended up playing professional basketball in Israel instead.

Summarizing his time at Blair, Magid turns to thank his teammates and supporters along his basketball career. “We created great memories, and we made people happy. There's no better legacy than that, ” he appraises. 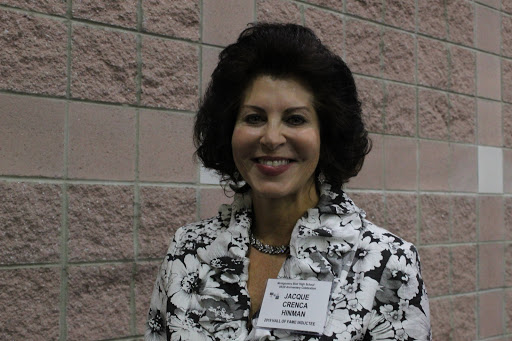 Photo: Jacque Crenca Hinman thanks Blair for her successful mindset as a CEO (courtesy of Nathalie Molina).

Photo: Jacque Crenca Hinman thanks Blair for her successful mindset as a CEO (courtesy of Nathalie Molina).

During her Blair years, Hinman shined as a member of National Honor Society and Spanish Honor Society, and especially as President of the poms team. This enthusiasm and determination to be involved in the community, fused with Blair’s moral code, led her to success at her engineering firm.

Hinman believes that Blair's environment guided her towards a successful mindset. “The student body and faculty’s diversity in culture, race, religion, and socioeconomic status... [Blair’s] way of being and thinking and feeling has stayed with me my whole life and was critical in helping me as a Fortune 500 CEO, “ Hinman deliberates.

Many recognizable projects that Hinman has worked on with CH2M Hill include infrastructure for the 2012 and 2016 Olympic Games. Retrospectively, she remembers where it all started. “Not bad for the downcounty academic underdogs,” she says.

Chick Hernandez's time at Blair echoed with the sounds of mischief and laughter. "My crowning achievements were being voted class clown from grades 1-12," he says. Teacher after teacher would become exasperated yet amused by Hernandez's knack for finding trouble and the various nicknames he gave himself: Hollywood, Dazzle, Razzle, Leo, Moses and more. 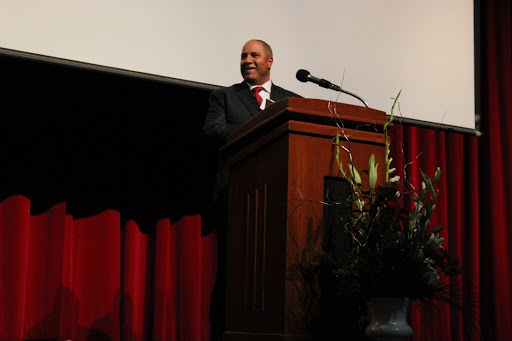 Photo: Chick Hernandez explains how his interests at Blair shaped his future as a sportscaster (courtesy of Nathalie Molina).

Photo: Chick Hernandez explains how his interests at Blair shaped his future as a sportscaster (courtesy of Nathalie Molina).

Throughout middle and high school, Hernandez was dedicated to the Boy's Service (BS) Club. "It was a microcosm of Blair. We had greasers, nerds, jocks, all colors, all religions in the club, and they helped teach me to make a decision on people based on my interactions with them-not to assume anything," he says.

Hernandez also devoted much of his high school years to playing in three sports: football, baseball, and swimming. Rather than continuing athletics beyond high school, Hernandez used his comical disposition to pursue a career as an Emmy-awarded sportscaster, combining his interest in sports with his dedication to the diverse local community. He worked for NBC Sports Washington and garnered support from fans in the area.

Hernandez again emphasized his love for the Blair community while accepting the award, "High school helps shape so many of us because of where we are in our lives when we get there. What a thrill to come home and be in front of my people."

Many recognize Craig Rice as a Montgomery County councilman serving his diverse community, but at Blair, his education pointed to something very different. Graduating from Blair’s Math, Science, and Computer Science Magnet Program in 1990, Rice attended the University of Maryland before diving into politics and public service. 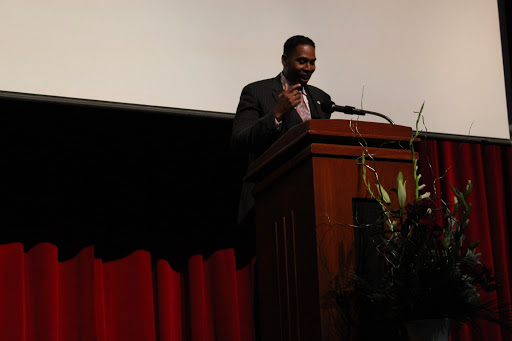 Photo: Craig Rice speaks about his unique experiences as a magnet student at Blair (courtesy of Nathalie Molina).

Photo: Craig Rice speaks about his unique experiences as a magnet student at Blair (courtesy of Nathalie Molina).

Rice's tendency to reach out to the community is reflected in the activities he participated in at Blair. As a magnet student, Rice felt isolated from the rest of his classmates, leading him to join various clubs such as the mock trial team, ski club and architecture club to connect more to the general Blair population. "It gave me opportunities to meet people I wouldn't have normally met and be able to establish friendships and relationships and get to know different kinds of people," Rice says.

As the chair of the Council’s Education and Culture Committee, Rice supports schools in Montgomery County by fighting for access for everyone and ensuring that "nobody gets left behind" by the school system. Rice describes how these goals were exhibited in his Blair a community as well. "The inspiration, entertainment, everything that we value in our community, that we value in our society, we've been able to do it all at a great school… We've heard stories of how we stepped up to support our Blazers when they were in a time of need," Rice says.

Each of the 2019 inductees has paved the way for others to benefit from their interests after their time at Blair, whether it be through shaping policy, building public infrastructure, providing entertainment or furthering science. "You don't have to be a Blazer to be a trailblazer, but I'll tell you this: being a Blazer makes you a very special trailblazer," Rice concludes.