In the 21st century, technology plays a major role in education and benefits students and teachers alike. From Promethean Boards and Chromebooks to myMCPS Classroom, Montgomery County's education system has gradually become more reliant on technology. However, there are often issues such as WiFi disconnections and malfunctioning Chromebooks in a large school like Blair, where hundreds and sometimes thousands of students use Chromebooks at any given time. This is where information technology (IT) specialists come in. 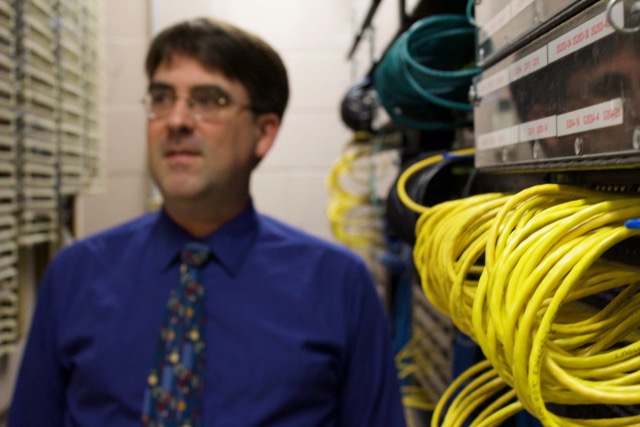 Photo: Peter Hammond is in charge of dealing with Blair's technological problems (courtesy of Audrey Haverland).

Photo: Peter Hammond is in charge of dealing with Blair's technological problems (courtesy of Audrey Haverland).

Peter Hammond, Blair's Information Technology Systems Services (ITSS), has been at Blair for 25 years, yet many students have never met him. He works in the back room of the media center, where he deals with Blair's multitude of technological problems. He also runs Blair's websites alongside the System Operators (Sysops), a small application-based group of students interested in technology and computer programming.

Hammond works primarily with computer and software system malfunctions. "Anything that is computer-related has a decent chance of being something I deal with," he said. "There are a few exceptions here and there, but if something breaks or if something needs adjustment or there's something new, then I have something to do with fixing it or explaining it or adjusting it," he adds.

Blair is especially prone to such malfunctions, Hammond says, due to its large student body size and application programs. Blair has over 3,000 Chromebooks, at least 700 desktop computers and laptops and about 3,500 Montgomery County Public Schools (MCPS) accounts between students and staff. Additionally, its Math, Science and Computer Science Magnet and Communication Arts Program often have technological issues of their own.

Although the county is in charge of coming up with a central software template for all schools to use, this often has to be tweaked to fit Blair individually, which is another aspect of Hammond's job. This is for the most part because of its application programs that use their own extra software. Hammond's favorite parts of his job are figuring out problems and having the opportunity to help others. "[Problems] are something that's puzzle-like that I get to solve, and also, whenever you're doing something that's helping people out, that's good too," he said.

Hammond is also the supervisor of the Sysops. They maintain and repair Blair's two servers, which run most of the school's websites, such as mbhs.edu, club pages and Silver Chips Online.

Though the Sysops' role has changed since the group originated two decades ago, they are still crucial to Blair's IT system. "In 1995, you could let a student have a lot more access than they have now, because grades and everything else are on the system, but they still help run our websites and deal with repair issues," Hammond said.

Senior Evan Guenterberg, who joined the Sysops over a year ago, enjoys the opportunity to solve problems with his friends. "Whenever there's an issue, we all get together to work on it," he said.

In addition to website and software maintenance and repair, the Sysops take part in their own side projects, some more necessary than others. Some are just fun, silly projects, and others have serious benefits for the entire school. One project that they are currently working on is cleaning out their tech room, which contains old Sysops equipment that hasn't been looked through in awhile, including lots of computers, according to Guenterberg.

A subgroup of the Sysops, the Webmasters, is in charge of maintaining, updating and occasionally redesigning Blair's home page. This website revision takes place every few years when there are enough interested students. Hammond hopes it will happen sooner rather than later because the site is starting to look "a little shabby."

It's important to understand the value of the work Hammond and the Sysops do for Blair. Even if it isn't always easily seen, they play an essential role in keeping Blair's web systems and software as modern as possible in order to ensure that students receive a quality 21st-century education.