A revealing story of our government and the way it operates

While watching Bachmann, there's no indication that he's a fictional character. The hard drinking, tough Bachmann and Philip Seymour Hoffman melt into one entity as soon as the film begins. His emotions seem almost too real, and his frustration and despair reaches out and grasps the essence of what makes us human. Bachmann is witty, yet gruff; tender on the inside, but a cynic outwardly. It's an extremely complex role, but one that Hoffman seems born to play. Hoffman builds his character from the small things – his addiction to cigarettes and alcohol, or his frequenting of dive bars. Similarly, the character of Bachmann builds up his operation slowly, letting Karpov roam in order to build a case against a larger target. And there's something else they have in common – in both cases, it all comes crashing down.

In Bachmann's world, you're either wealthy or you're poor. There's no middle ground. Director Anton Corbijn and cinematographer Benoît Delhomme manage to capture it perfectly, switching rapidly between the numerous seedy dive bars that populate Bachmann's world and the exquisitely polished, elegant hotels of his coworkers and targets. Throughout the entire film, however, the feel of a gritty, rough town is there, reminding everyone of the severity and intensity of the situation.

If you're looking for an action movie, this isn't it. There is a chase scene, albeit one that ends up with portly Günther Bachmann wheezing in a dead end, having lost his target. And although at one point there is an almost comically stereotypical kidnapping, the film is grounded firmly in reality. Bachmann's struggles with his peers make the whole situation tenser. Rather than the typical "good guy versus bad guy" scenario, Hoffman is left alone trying desperately trying to manipulate his entire surroundings, supported only by those on his immediate agency team. 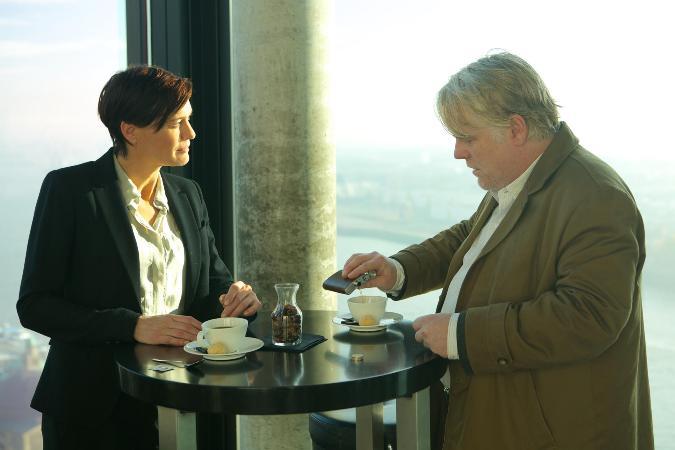 A Most Wanted Man Movie Shot

This movie is fiction, but barely so. There are no logical fallacies here and no unbelievable moments. This film exposes parts of ourselves that we don't enjoy thinking about; universal feelings of helplessness and failure. And not only that, it exposes the way bureaucracy works: with government, it's all about the short term. There's no time for anything else, so full steam ahead. It's a method of operation that has been used for decades.

With a dexterous cast and gritty cinematography and directing, "A Most Wanted Man" keeps the audience in suspense for the entirety of the film and leaves the audience with necessary questions on the ways we (and the government) function.