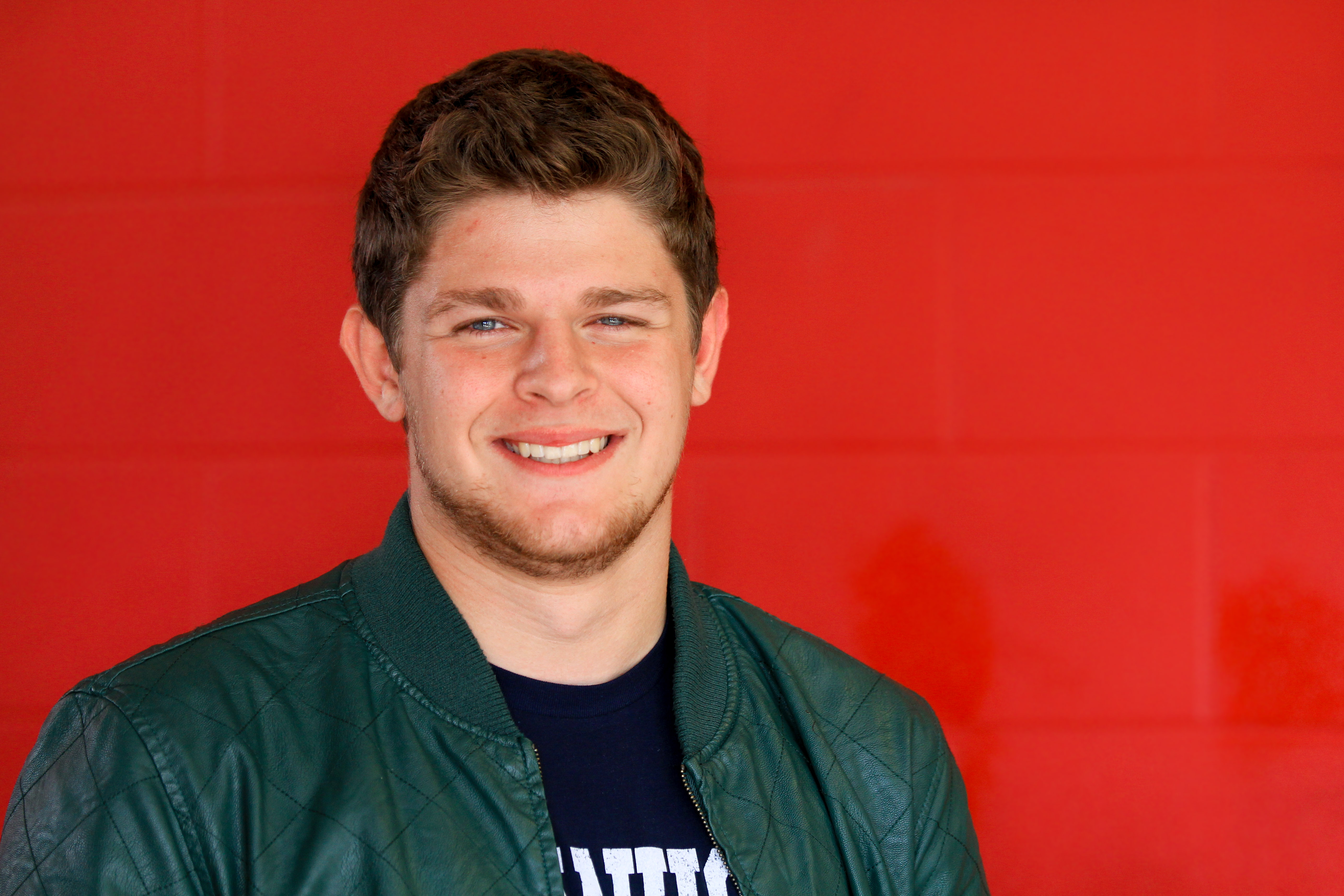 Name: Nicholas Shereikis
Position: Grand Vizier
Graduation Year: 2016
"Did you hear about the rose that grew from a crack in the concrete? Proving nature's laws wrong, it learned to walk without having feet. Funny it seems, but by keeping its dreams; it learned to breathe fresh air. Long live the rose that grew from concrete when no one else even cared." -- Tupac Shakur

I don't want to talk about it

The biggest issue with commonly accepted depression statistics is that our current definition of depression itself tends to write off symptoms more prevalent in males, leaving unaccounted the societal trends that make men less likely to seek help or admit to having a mental disorder.

Picking a bone with David Trone

Campaigning extensively and aggressively over the past few months, 60-year old multimillionaire David Trone has entered the race to become the Democratic nominee for Maryland's eighth Congressional District.

Blair seniors Max Burke and Lytton Xu created their own brand and company,Crown Clothing Co. So far, two short sleeve shirts are available on their website in white and black.

"You think they want me to have all these plaques?" the man who is one of the generation's most idolized hip-hop moguls asks, letting his camera glide over his wall of gold and platinum albums in yet another Snapchat video. "They don't. They don't want you to win."

The Montgomery County Public Schools Board of Education made the decision to eliminate all high school final exams in favor of shorter, open-ended assignments in September. However, a recent survey revealed that an "overwhelming majority" of teachers disagree with the decision.

This fall marks the second year of the Teal Pumpkin Project, a relatively new campaign launched by the Food Allergy Research and Education (FARE) with the goal of creating a safer and more inclusive Halloween environment for kids with food allergies.

The Nationals, the Redskins, the Capitals, and the Wizards. What do all four of these teams have in common? The answer is obvious if you're a D.C. sports fan – none of them have won a championship in over two decades.

Generations of students have asked this question which still remains unanswered today: what is a Blair 'Blazer?'

It's time we recognize a trait that is characteristic of our generation: our reluctance to commit to anything.

For the good of the game

A bright light shines through the hopelessly entangled jungle that is American politics. I'm talking, of course, about rapper Waka Flocka Flame.

The boys' lacrosse team (8-7) entered the third round of playoffs on Monday evening against the Sherwood Warriors (10-4). Struggling to hold the Warriors at bay while maintaining possession, the Blazers ultimately fell by a final score of Blair 7, Sherwood 20.

On a burning hot Friday afternoon, the Blair boys' lacrosse team (8-6) set up against division champions Blake (9-4) in the second round of playoffs. Despite losing to them 10-4 during the regular season, the Blazers came out full of intensity and confidence. Battling for their lives, Blair managed to overcome a four-goal deficit and win the game in the dying minutes by a final score of 10-8

The Blair boys' varsity lacrosse team (7-6) entered their first playoff game Wednesday afternoon at home against Kennedy. After beating the Cavaliers 10-1 when the teams met during the regular season, the Blazers came out looking strong and confident. They ended up winning by 17 goals, and kept their first clean sheet of the season.

On a hot Saturday afternoon, the Blair boys' lacrosse team met the Wheaton Knights on the field of battle for the first time. In front of a cheering crowd, Blair got off to a strong start and kept the momentum for the rest of the game. By the end of the match, the final score was Blair 17, Wheaton 4. The game, apart from being the last regular season game, was also Blair's senior night.

In front of a very vocal crowd, the girls' varsity softball (15-1) took on the Wheaton Knights at home on Wednesday evening. After getting off to a rough start, the Blazers quickly turned themselves around and began to dominate the game. By the top of the fifth inning, the high scoring game ended thanks to the mercy rule. The final score was Blair 19, Wheaton 1.

Blazers get conquered by the Wildcats

With parents and fans watching in the stands, the Blair boy's lacrosse team (5-5) met the Walter Johnson Wildcats at home for the first time this season. Despite coming out strong, the game slipped away from the Blazers until it finally ended with a score of Walter Johnson 16, Blair 5.

On an overcast Saturday afternoon, the boys' lacrosse team (5-4) took on the Blake Bengals at home. The Blazers fought hard, staying with the Bengals for the entire first half. However, final score was 10-4 in favor of the Bengals.

On a wet Monday evening, the Blair's girls' lacrosse team (3-4) took on the Springbrook Blue Devils. Despite going down 3-0 in the first half, the Blazers continued to fight back until, minutes into the second half, flashes of lightning and rumbling thunder disrupted the match. Both teams were forced to postpone resuming the game until Wednesday, where Blair lost the hard-fought game 8-6.

Yet again, Blair theater has brought together an incredibly talented cast, exquisite costuming, authentic music and a well-designed set to their performance of this year's spring musical, "Fiddler on the Roof."

Blair's boys' varsity lacrosse team (2-2) saw their first home win of the season against the Kennedy Cavaliers. Effective offensive possessions and intricate passing helped the Blazers find the back of the Kennedy net again and again, ending the game with a score of 11-2.

The monotony of monogamy

In the wake of the lesbian, gay, bisexual and transgender (LGBT) movement in the U.S., legalizing polygamy actually seems like the obvious next step.

While it's true that racism is much more prevalent in other areas of the country than at Blair, Dahal's story is still just one of many incidents where a member of Blair staff has racially profiled a student.

Recently, a number of the Blair baseball team's (5-3) home games have been postponed because of field conditions. The team has also been unable to get onto the field for practice.

Despite coming out strong, the boys' varsity lacrosse team (1-2) fell to the Walt Whitman Vikings by a final score of 20-3. As Whitman slowly gained momentum, the Blazers struggled with clear communication and creative attacking play.

Boys' lacrosse falls to the Cougars

After months of intense deliberation and serious debate, the Montgomery County Public Schools (MCPS) Board of Education (BOE) has made a momentous decision.

And the award goes to…

Here at Blair, we have some pretty remarkable students – and they all have their own special talents. And they put their skills to good use! In honor of these outstanding achievements, here's a list of recent awards and their recipients.

Protests and riots against perceived racial bias in the U.S. justice system erupted within seconds after the decision to not indict officer Darren Wilson was announced. The reaction has spread nationwide but is most concentrated Ferguson and the greater St. Louis region.

Now that the dust from November's midterms has settled, many are carefully watching Larry Hogan's every move and offering their own criticisms. However, let's not judge Larry Hogan based solely off of his affiliation with a certain political party.

After placing seventh in the English Premier League (EPL), Manchester United is coming off of one of its worst seasons in years. Under new management and with the addition of a few key players, however, United's prospects of finishing in the top four are improving.

In 2012, Okombi escaped war-torn Democratic Republic of Congo to the U.S. with his family. He enrolled at Blair the summer after, immediately joining the inter-school summer soccer league.

Horrifyingly, yoga pants and other articles of the female wardrobe are slowly becoming extinct in school districts around America. Young women nationwide are being forced to give up their freedom to dress as they choose in order to prevent their male counterparts from becoming distracted.

The grand jury's delay in the case of Ferguson, MO police officer Darren Wilson speaks volumes about the ineffectiveness of our legal system, especially in certain states.

Blair crew's practice schedule was put on pause on Sept. 17, 2014, by an investigation in the Bladensburg Waterfront Park. Filled with police searching for a discarded weapon, a large part of the area – including where crew keeps their boats – was off limits for the public.

In their fourth game of the season, Blair football (3-1) tore apart Springbrook (0-4) in a game that ended 40-18. Although marred by an 18-minute blackout and a medical issue in the stands, the Blazers worked together and played hard throughout the entire game.

This year, Blair's cross country team has added 31 new members, bringing the total to 96 runners. With 14 students running varsity and the other 82 running junior varsity, it's the most Blazers ever on the squad.

The recent push by conservatives like Wisconsin governor Scott Walker to repeal Common Core is purely political and has nothing to do with the effectiveness of the program.

On Thursday, July 17, Malaysia Airlines flight 17, en route to Kuala Lumpur via Amsterdam, was shot down over the Donetsk region of Ukraine near the Russian border. None of the 298 people onboard survived.

Local shops boarded up windows and painted signs in opposition to the decision.

Photo: in this mug

Artists of varying talent came out to support their community.

Tree House boarded up it's windows in anticipation of riots.

Rooster boards up its windows.

Some stores used the opportunity to advertise their businesses, while others protested the decision.

A woman stops to read the messages painted on the boarded up windows of local shops in St. Louis, MO.

People stop to take pictures with the window art.

Artwork outside of Rocket Century in St. Louis, MO.

Photo: It's In Our Hands

Messages of peace and hope for change are everywhere.

Despite being boarded up, many stores remained open to the public.

Every message painted provides a positive outlook for the future.

A woman stops to read messages painted on boarded up shop windows in St. Louis, MO.

Local artists volunteered to paint over boarded up shop windows.

Photo: A Community That Celebrates Diversity

"Celebrate a community that favors diversity."

Stores make the best of the situation.

The St. Louis Post Office sports one of the most detailed images in the area.