Picking a bone with David Trone

Or, why you should vote for Raskin

If you've seen any of the ads (I'm going to refer to them as "Trone strikes"), and chances are you have, it looks like local favorite Congressional candidate Jamie Raskin might finally have some competition. Businessman David Trone's self-financed television and radio ads have thoroughly permeated Maryland's 8th Congressional District, spreading pictures of his family's old farm, friendly chats with employees of his wine company, and the man himself sitting behind the desk in his overwhelmingly modest office.

Campaigning extensively and aggressively over the past few months, 60-year old multimillionaire David Trone has entered the race to become the Democratic nominee for Maryland's eighth Congressional District. Trone is a co-owner of Bethesda-based company Total Wine & More, and is using his own wealth to finance his campaign. 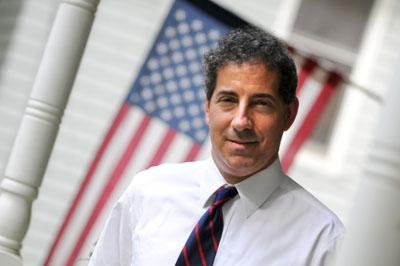 Trone's ads present him as the epitome of the American success story: a man who grew up on a small farm to become an outrageously successful businessman with a focus on family and a history of job creation. But if you look closer at his history and business actions, his commitment to progressive policies becomes a little sketchier.

While maybe entirely coincidental, Trone's decision to run for office comes during a heated debate over Montgomery County's public liquor control structure, which is both a state and local issue. He has donated just $90 thousand to the Democratic Party, but over $150 thousand to the Republican Party. Trone donates with the intent of influencing legislation that may affect his business, regardless of the consequences or effect it has on other issues. He has also recently attempted, through legislative efforts, to loosen state law in order to allow expansion of Total Wine & More retail outlets in Maryland. Trone even went so far as to tell reporters "I sign my checks to buy access” in a recent interview, which may suggest that his candidacy for congress is nothing more than a poorly disguised attempt to legalize private liquor sales in Montgomery County.

And this last attempt to expand in his home state throws into sharp relief issues with his claim to job creation. Trone is actually not a job creator in Montgomery County because he's legally not allowed to expand his business, and no election to political office will change that. Despite owning a national franchise and employing thousands, he has not had the same success within the district that he's running to represent.

While Trone is using his millions to create a path to Congress, candidate Jamie Raskin is continuing the grass-roots approach that has led to his repeated elections as state Senator. Raskin has a history of achievement in office, including the role he played in the passage of Maryland's marriage equality legislation in 2013, as well as the repeal of the death penalty. He's also publicly predicted that he will be outspent by both Trone and Matthews in this race. "Public office is something you earn, not something you buy,” he said in a recent online fundraising pitch.

The other serious competitor for the democratic nomination is Kathleen Matthews, wife of Hardball icon Chris Matthews. While having valid views and opinions, Matthews, seems to be treating her campaign as more of a game – despite spending more than Raskin, her name recognition is not as great. She is also still behind Raskin in most polls, with Trone close on her heels.

Trone and Raskin may have seemingly similar stances on many issues, but the transparency with which they conduct their campaigns are far from identical. Trone is a multimillionaire attempting to buy the election; a man who has a history of paying off anybody who can help promote his brand with disregard for affected policies and constituents. Raskin is a well-supported local icon with a history of achievement, someone who has steadfastly stuck to his principles and morals despite the political turmoil around him.

When making the decision on who to vote for, it's important to remember where the candidates are coming from. Sketchy business actions (and family's small farm) aside, Trone is a multimillionaire with a very expensive house in Potomac. Matthews is the wife of a nationally recognized political pundit. Raskin, on the other hand, has been living with and serving his community for years.