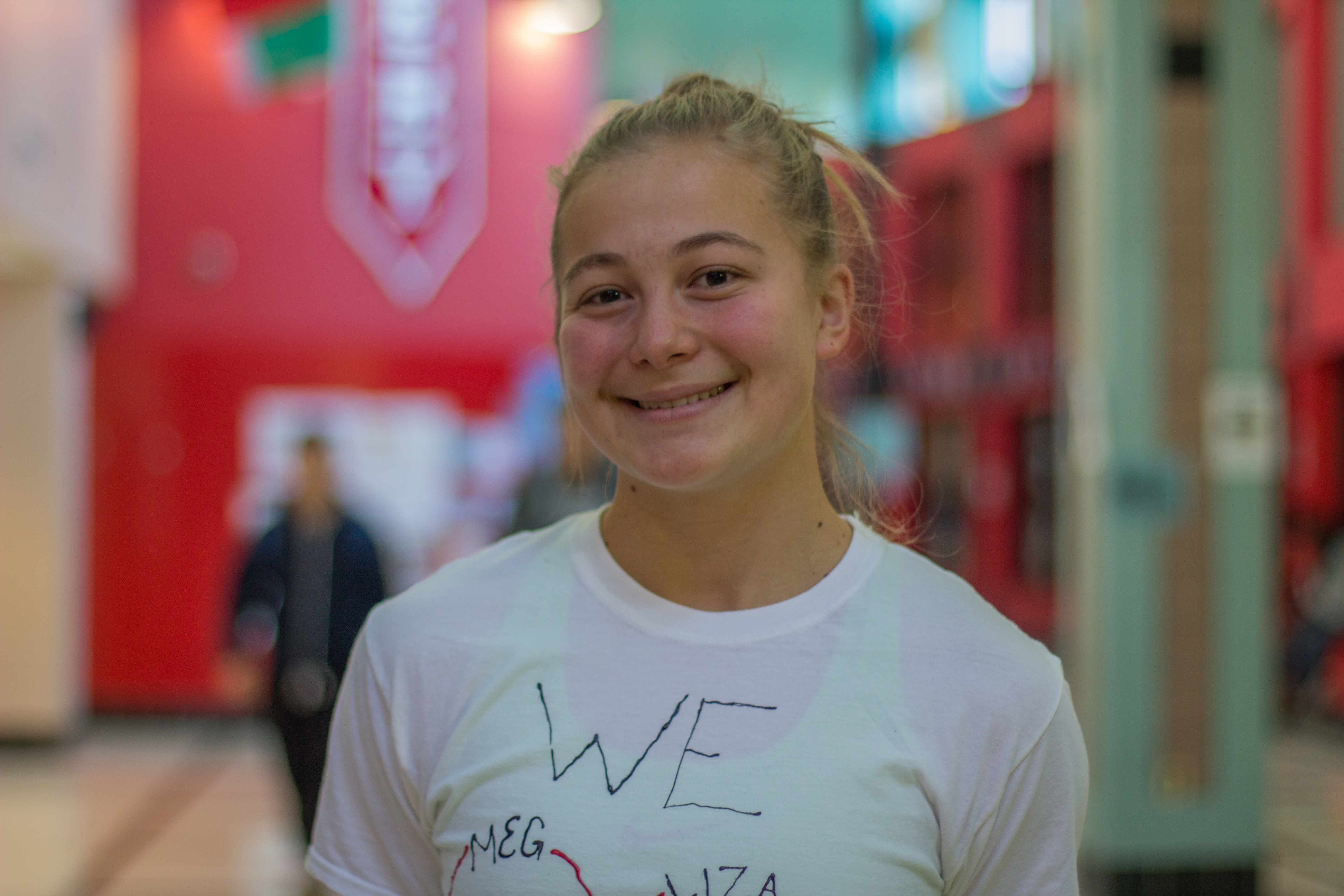 Name: Eleanor Cook
Position: Online Editor-in-Chief
Graduation Year: 2017
Hi! I'm super excited to be an Editor-in-Chief of SCO this year. When I'm not managing this site I enjoy playing soccer, basketball, and running track, and am an avid reader and Harry Potter fan. Have fun reading about the latest Blair events!

Blair mourns the loss of a student

Junior Isaque Oliveira was a quiet student with big ideas. Friends remember how he was fun and caring. In class he looked for the big picture and pursued topics further. Early on the morning of January 31, however, Oliveira took his own life. He is survived by his mother and father, his older brother and his younger sister.

In a disappointing end to the season, the Blazers (13-9) lost to the Bethesda-Chevy Chase Barons (14-6) by a score of 52-37. The Barons gained a lead early in the game and, although that lead fluctuated, the Blazers were never able to come back.

The Blair boys' basketball team (9-8) flexed its muscles against the Northwood Gladiators (2-17) on Tuesday. With a full-court, man-to-man defense throughout the game, the Blazers put pressure on Northwood from the beginning and took advantage of opportunities on offense. After gaining a lead in the first quarter, Blair pulled ahead significantly and never looked back.

The play's the thing

In this modern-day rendition of Shakespeare's classic tragedy, complete with selfies and sweater vests, Blair theater brings Hamlet to life. With a wonderful cast and set, the play is two-hours well-spent.

"You're listening to WOWD-LP and this is Block Period." It's 10 p.m. on a Friday night. While most people are just getting into the swing of the weekend, Blair seniors Max Kittner, Maia Pramuk, Mika Yatsuhashi, Olivia Lindsley and Vivian Bauer are hosting a radio show.

Junior Thierry Siewe Yanga won the Maryland boys' 4A 800 meter race with a time of 1:55.22 at the Maryland Track and Field State Championships at Morgan State University in Baltimore on Saturday, May 28. The day before, Friday, May 27, he also led the boys' 4x800 meter relay team, along with seniors Ben Geertsema and Alexander Mangiafico and junior Dominic Massimino, to win the state championship with a time of 7:58.58.

In the Maryland State House of Delegates, there is currently a bill on the floor that would require all school personnel to receive mental health training each year.

Blair varsity baseball (6-5) lost to the Walter Johnson Wildcats (10-2) in a close game by a score of 4-2. After allowing two runs in the top of the ninth inning, the Blazers were unable to bounce back.

Despite a strong start and consistent efforts throughout the game, the Blair boys' lacrosse team (0-5) was not able to fight off Magruder (2-4). The Blazers led early on, but as the game continued, they had no answer to the Colonels' continued offense, and lost 12-10.

After campaigning for several weeks and travelling around the county, Blazer Olivia Gonzalez agreed to sit down with SCO to provide insight into the experience of running for SMOB.

Ooh ah, you wish you were a Blazer!

In basketball, and all sports, female athletes work just as hard as their male counterparts, and should therefore be given the same respect. Girls' sports teams should be referred to without the preceding "Lady."

Happy Super Tuesday! More states vote today than at any other point in the primary contest. A huge amount of delegates are awarded and candidates who do well on Super Tuesday tend to win the nomination.

ESOL classes are an important part of helping students adapt to their new country and succeed academically but, above all, they are made up of hard-working students and teachers.

A warning about school Google products

In 26 schools, as well as the Rocking Horse Road Center daycare and the Lathrop Smith Environmental Education Center, where many students go for Outdoor Education in middle school, the levels of radon in one or more rooms were above the recommended 4 pCi/L.

"Joy" is a modern-day story of rags to riches, and plays off of the clichéd idea that anyone can make it big in America. With more character development, it would be an excellent film, but without it, there is too much missing for it to be plausible.

Cheering for a win

From the summer before the season through Nov. 13, the day before their competition, the cheer team practices every day, growing as a team and as individual athletes. This year they finished on top, winning first place in Division Two for the first time since 2007, and the Spirit Award for the 11th year in a row.

Vigil held for woman who died in Mali terrorism

Takoma Park community members gathered at the gazebo in Old Town Takoma Park on Sunday, Nov. 22 for a candlelight vigil to mourn the loss of Takoma Park resident Anita Ashok Datar, 41, who was killed in the terrorist attacks on a Mali hotel on Nov. 20.

Voters in Takoma Park, Maryland elected Kate Stewart as the new mayor at the Takoma Park Community Center and selected city councilmembers of their wards on Nov. 3. Since the voting age in Takoma Park was lowered to 16 in 2013, several Blair students were able to vote in the Tuesday elections.

Mohammed Shafiq Khan, 21, crashed into a tree at the intersection of Gist Ave. and Ray Dr. in Silver Spring on Wednesday, Oct. 21, in the early morning. On the evening of Thursday, Oct. 22, Yoftahea Afework Melese, 20, crashed on Carroll Ave.

Blair opens cap and gown color options to all genders

The class of 2016 voted on Thursday, Oct. 8 that they will continue to have both red and white caps and gowns at graduation. Principal Renay Johnson announced the outcome of the vote later that day, but decided students will be able to choose whether they want to wear red or white.

While meeting with Jinping and maintaining relations China are important, the White House's grand reception of the Chinese president was irresponsible and should have been scaled down.

"The Intern" rises to the occasion

Falling in love with "The Intern" is easy. It excels at portraying the complexities of life in the 21st century and keeps audiences rooting for Ben, Jules, and their colleagues and company the whole length of the film.

The Montgomery County Public Schools (MCPS) Board of Education decided to do away with final exams in all high school courses beginning the 2016-2017 school year.

Since the end of the 2014-2015 school year, Downtown Silver Spring has undergone several changes, and more are projected to be finalized later in the year. New restaurants have gone into vacant spots and renovations have made space for more new eating and shopping venues.

As the summer winds down and school floats back to the top of everyone's minds, students should take advantage of their last few days of freedom. A great way to ease back into the idea of learning would be by spending a day in Downtown DC visiting museums and monuments.

"Paper Towns" is worth the trip

"Paper Towns," based on the novel by John Green, combines clever humor with existential questions to create a film that has the audience not only laughing with the characters as they encounter comical situations, but also reflecting on their own lives.

A green light for the Pope's discussion on climate change

Pope Francis' actions should be celebrated as an effort that will bring one of the globe's most massive organizations, as well as millions of people throughout the earth, back onto the world stage.

Constituents listen as their representatives talk.

Maryland is modifying the Government High School Assessment (HSA) to comply with the Common Core. The Biology HSA will be replaced.

A Montgomery County Police Officer clears Blazer Stadium before staff and students are directed into it.

Photo: In the Studio

Seniors Maia Pramuk and Vivian Bauer look out of the studio where they are recording their radio show "Block Period."

Takoma Park mayor Kate Stewart leads the singing of "This Little Light of Mine."