In the Maryland State House of Delegates, there is currently a bill on the floor that would require all school personnel to receive mental health training each year. Primarily sponsored by Delegate David Fraser-Hidalgo (D) from District 15 in Montgomery County, the bill is an extension of "Lauryn's Law," which Governor Larry Hogan signed last summer The previous law mandated that counselors go through mental health training every five years.

In light of recent student suicides in Montgomery County Public Schools (MCPS), the Montgomery County Region of the Maryland Association of Student Councils (MCR) decided to team up with Fraser-Hidalgo to support the bill. "Our role specifically was that I was able to reach out to other regional student governments and weigh their support for the bill," said MCR President David Edimo, who generated grass roots support for the bill and coordinated with The American Foundation for Suicide Prevention. 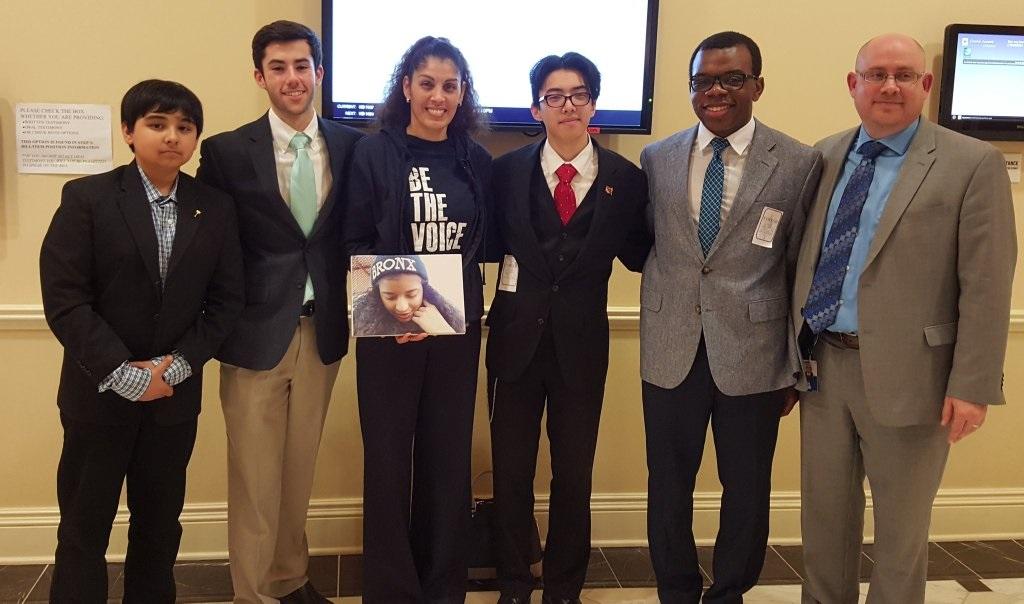 Photo: Members of MCR with Lauryn's mother and Del. Fraser-Hidalgo after testifying before the Maryland House Ways and Means Committee.

Photo: Members of MCR with Lauryn's mother and Del. Fraser-Hidalgo after testifying before the Maryland House Ways and Means Committee.

Members of MCR knew from the beginning of the school year that they wanted to focus on mental health - it was simply a matter of determining how they could make the biggest difference. They considered adding more mental health teaching in the county health curriculum but that did not meet all of their goals. "We felt that the mental health unit within the health curriculum was already satisfactory. So we heard about this bill, Laruyn's Law," MCR Vice President and Blair junior Prim Phoolsombat said.

The previous installation of "Lauryn's Law,” which was introduced by Delegate Joseline Peña-Melnyk (D) from Prince George's County in response to the story of a mother, Linda Diaz, whose daughter, Lauryn Santiago, took her own life in 2013. Diaz had suspected that there was something amiss when Santiago's grades had begun to fall and asked a school counselor to meet with Santiago, but that meeting never happened. Santiago is a large proponent of the current bill, as well and has also worked with MCR and other organizations to gain support for it.

One of the main reasons MCR was so focused on the bill is because many MCPS schools are so large that it is difficult for counselors to know and help everyone in their school. "We shouldn't rely on just a small number of counselors who are pretty inaccessible anyway in our schools," Phoolsombat said.

According to Edimo, the bill is projected to cost the county an extra one million dollars per year, which he believes is well worth the cost and also pales in comparison to the school system's overall budget. "MCPS would have to pay approximately 1 million dollars which in the context of its entire operating budget of 2.3 billion, really isn't that much," Edimo said.