The play's the thing

In this modern-day rendition of Shakespeare's classic tragedy, complete with selfies and sweater vests, Blair theater brings Hamlet to life. With a wonderful cast and set, the play is two-hours well-spent.

Directed by Kelly and John O'Connor, the play opens in darkness and fog, as guards at the Danish palace Elsinore encounter a spectre (Noah Friedlander/Jonah Nan), prowling the night. This ghost turns out to be the recently deceased king – old Hamlet – who soon reveals to his son Hamlet (Ronee Goldman/Abby Rowland) the cause of his death, which he demands young Hamlet avenge. When sleeping in his garden, the king's brother Claudius (Luc Picone/Sam Newman) murdered him, and then ascended to the throne and married old Hamlet's wife Gertrude (Iyanu Bishop/Jennifer Garcia). Torn between the desire to obey his Father and maintain his own sanctity, young Hamlet spirals out of control, hurting many others along the way. 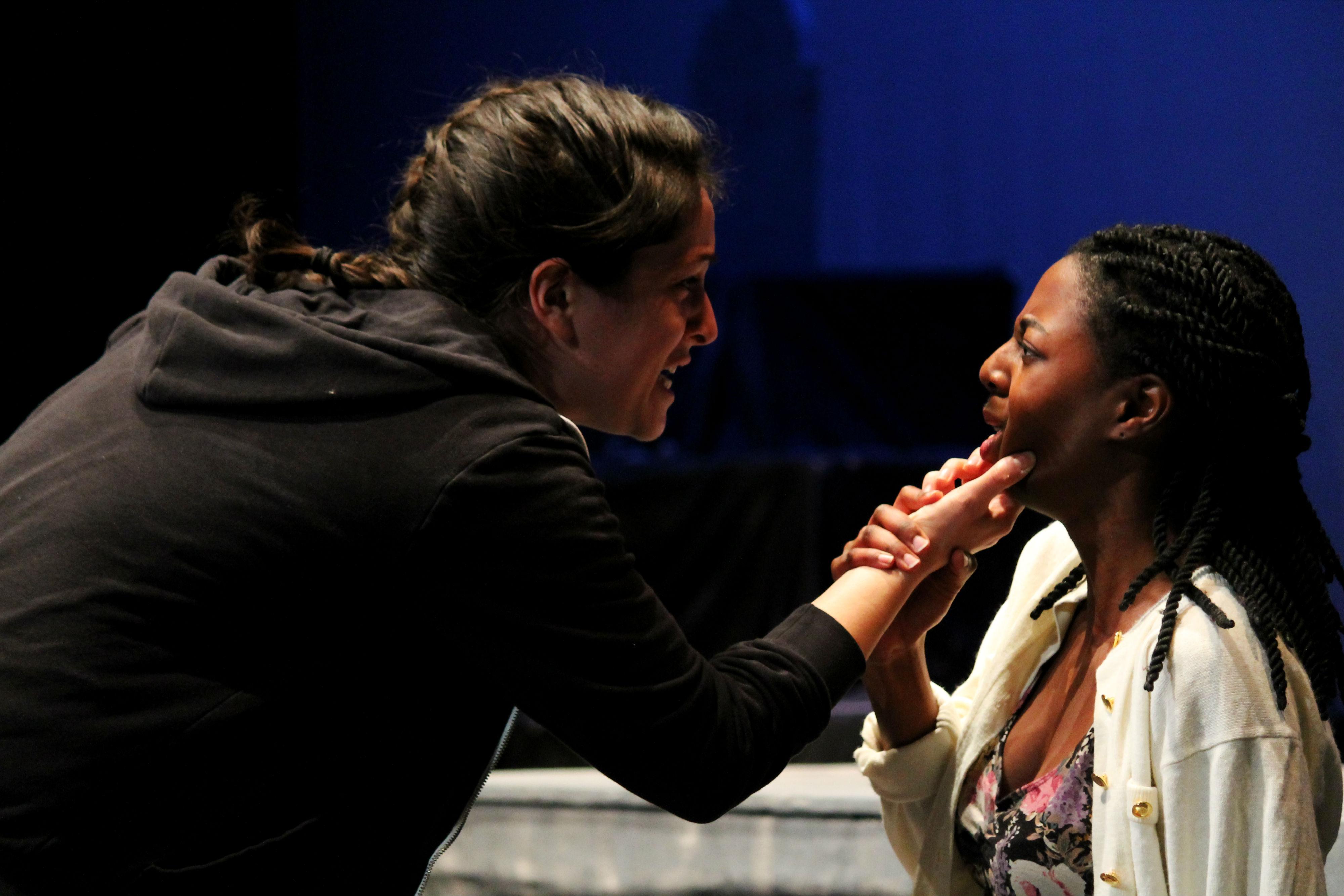 Photo: Hamlet (Ronee Goldman) grabs Ophelia (Erin Obaonrin) as he shouts at her.

Photo: Hamlet (Ronee Goldman) grabs Ophelia (Erin Obaonrin) as he shouts at her.

Although the set, designed by juniors Hank Groberg and Braedon Moomey, is only several wooden boxes of varying sizes that serve as platforms on a white back drop, it provides a framework with which the actors work. It supports the performance without distracting the audience from the action. As the characters saunter, skip and sprint around from box to box, they take control of the stage, instead of the stage taking control of them. The lighting, designed by senior Olivia Lindsley, sets the mood, sometimes bright as Hamlet looks up into the clouds, and sometimes ominous, as Hamlet drives his former lover Ophelia (Erin Obaonrin/Karuna Nandkumar) away.

The design of the intimate black-box stage allows the actors to shine. For a play so dark and treacherous – one of Hamlet's main predicaments is wondering what happens after death – there are many light moments. Goldman and Rowland excellently deliver the famous "To be or not to be" speech, but they also go beyond the script, peppering their performances with subtle witticisms. Whether belching out the Beatles classic "Strawberry Fields Forever" or making fun of old Polonius (Ben Miller/Isaac Bonilla), Goldman and Rowland as Hamlet deliver perfectly timed and clever quips as they put on an "antic disposition." Rosencrantz (Anson Berns/Sarah Di) and Guildenstern (Katie Faust-Little/Justin Gross) also provide light moments as they amble along and try to cheer up Hamlet.

Despite the light moments the play nonetheless remains a serious tragedy and the actors, set and predominantly dark costumes portray this. As Claudius screams in rage or Gertrude cries out in terror, they become real. It is impossible not to empathize with Laertes (Emmett Adler/Henry Wiebe) as he despairs at his loss. Not only do the actors excel, but dark music in the background makes their sorrow all the more palpable.

Blair's production of Hamlet is enjoyable from beginning to end. The audience is swept along on a rollercoaster of highs and lows, laughing along with characters and gasping in horror along with others. Although Shakespeare's famous tragedy is adapted to modern day, with fedoras and electronic tablets instead of top-hats and scrolls, it retains its integrity, its tragedy and its excitement. Hamlet is a must-see.