"You're listening to WOWD-LP and this is Block Period." It's 10 p.m. on a Friday night. While most people are just getting into the swing of the weekend, Blair seniors Max Kittner, Maia Pramuk, Mika Yatsuhashi, Olivia Lindsley and Vivian Bauer are hosting a radio show.

Although none of the hosts of "Block Period" have any prior experience with radio, they aired their first show on the Takoma Park-based radio station WOWD-LP, 94.3 FM, on Friday, Sept. 16. By creating their own radio show, the group of Blazers hope to extend beyond their community of Blair and Takoma Park and highlight local young people, all while sharing good music. 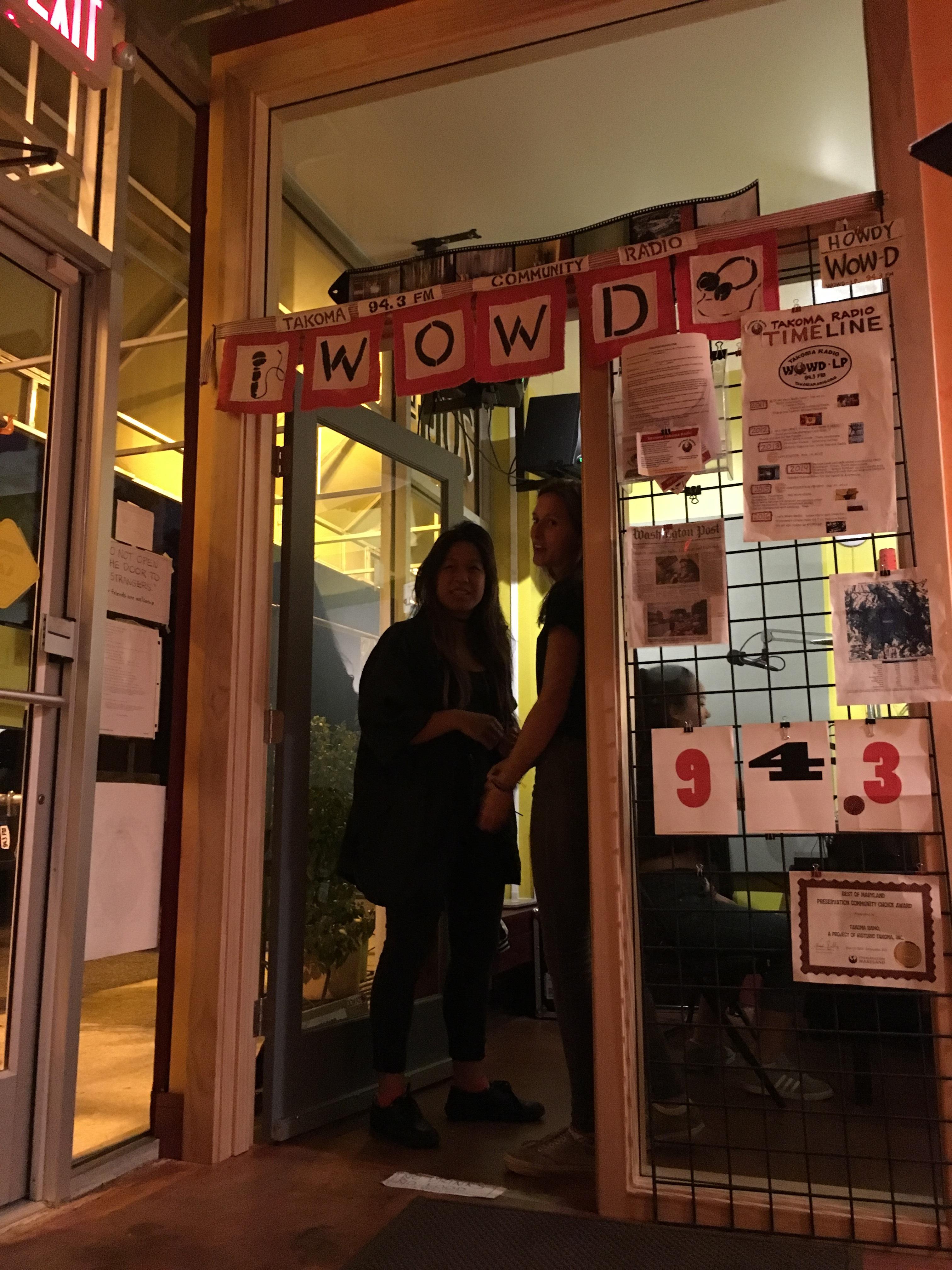 Photo: Seniors Maia Pramuk and Vivian Bauer look out of the studio where they are recording their radio show "Block Period."

Photo: Seniors Maia Pramuk and Vivian Bauer look out of the studio where they are recording their radio show "Block Period." Photo courtesy of Eleanor Cook.

It all started over the summer. Kittner, who is friends with Takoma Radio founder Marika Partridge, decided that he wanted to add a comprehensive teen perspective to the radio station. "I wanted to do something for this radio station, and I was thinking it would be really good for the community to have a teen perspective," Kittner explains. He then proposed the idea of a radio show via social media and Pramuk, Yatsuhashi, Lindsley and Bauer responded. Yatsuhashi was enamored with the idea when she saw it on Twitter. "I emailed Max and said, 'Max. Let me in on this,'" she says, laughing as she imitates the insistence of her email.

Although none of these Blazers have worked with radio before, each brings something different to the table. Kittner has done sound work for Blair theatre. Yatsuhashi and Lindsley have already done some digging to find unique perspectives in order to make a video series with Blair senior Claire Maske, profiling students at Blair that participate in interesting extracurricular activities. They plan on incorporating some of those perspectives into their show. Bauer loves exploring different types of music, whether at concerts or just in her room. As for Pramuk, she's been interested in radio and music for a while. Her prior experience with sharing her favorite songs? "I worked really hard on a playlist for my Tumblr when I was younger, it was pretty wild," she jokes.

Partridge, who is also on the radio station's executive team, has worked to make Takoma Radio pertain to everyone by airing a variety of shows. "We want to get voices of all ages and open up the radio," she says. In helping the group produce "Block Period," Partridge was glad to see that they took the opportunity very seriously.

The seniors now have a contract to air their show every Friday night from 10:00 to 11:30 p.m. for the next year. They decided to call their show "Block Period" because the hour and a half is the same length as a block period class at Blair. They also plan to alternate hosts every week, as Blair's block schedule does with odd and even days. They hope to include music and interviews centered around a different theme each week.

The theme of the first show is poetry. As an exception for their first airing, all five hosts are in the studio, excited to get started. After a brief description of the show, Lindsley and Yatsuhashi kick off the first segment with a recording of Blair class of 2016 graduate Nesha Ruther performing her original poem "Girlhood." Each host then has time to air a playlist of songs. In keeping with the theme of poetry, Yatsuhashi tried to find songs with expressive lyrics, for example, Angel Haze's "The Woods." "The Angel Haze one is kind of like a poem at the beginning and the end with spoken word and the lyrics are really powerful," she says. The show also features Blair senior Linie Nickel reading her original poems "Days like These," and "This Feeling" and then doing an interview with Bauer. 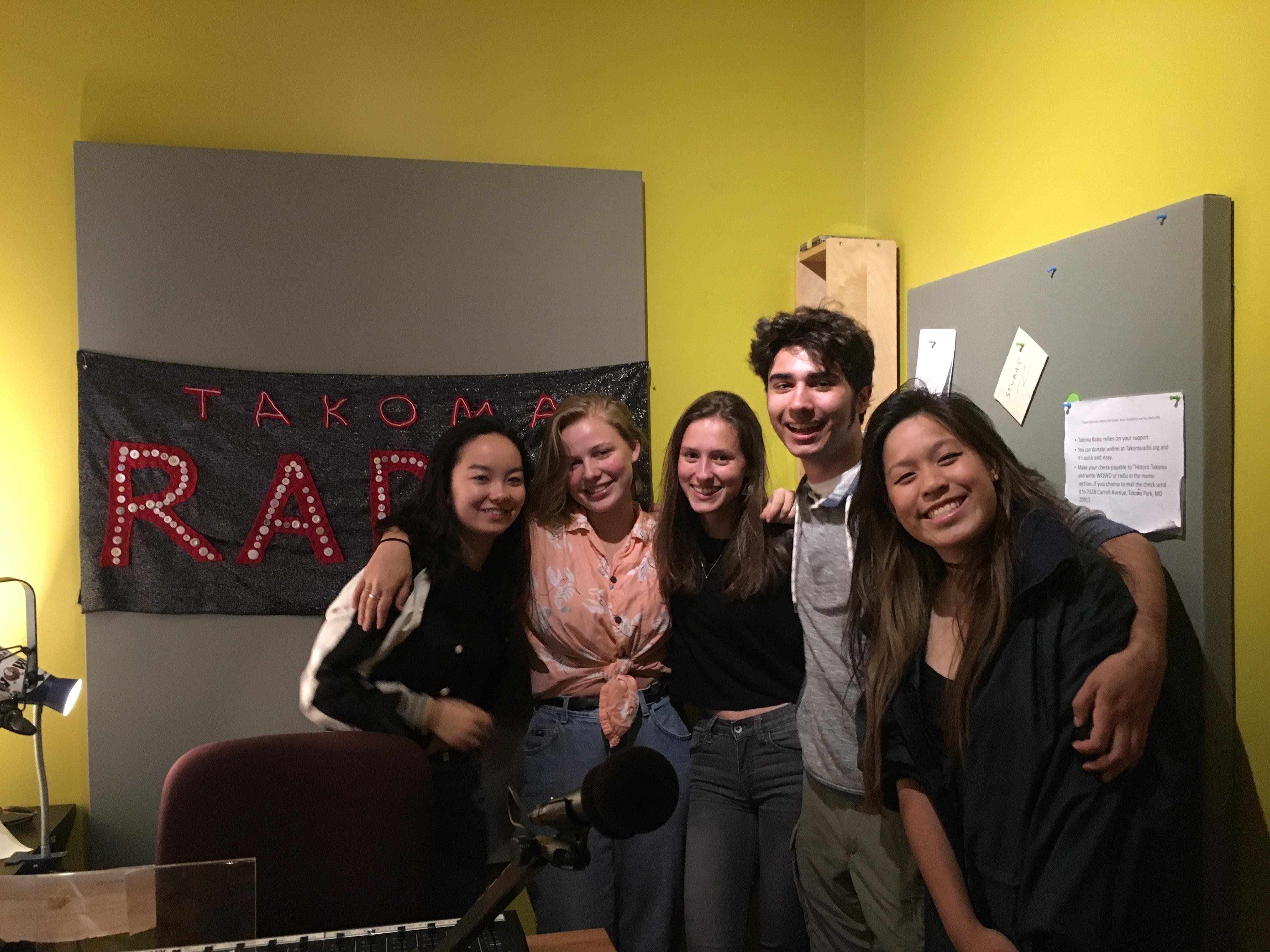 At the end of their first show, it's all smiles for the seniors. Alone in the studio, they high five and hug, proud of their accomplishment. Partridge, who was supervising and listening from home, shares in their joy. "All of us are very proud of their first show. We're really excited for Block Period!" she says the next day, looking forward to the exciting school year to come.

One success is not all that the founders of "Block Period" want. They will continue to push. In fact, with this first triumph under their belts, they now have even more confidence and ideas. "[The success of the first show] made me really excited because I know I have endless songs and bands that I want to play on the radio," Yatsuhashi says enthusiastically.

Pramuk also has plenty of ideas. For her, a radio show is a forum for creativity and collaboration. "I'd like this to be a radio show that's more of a community and I want it to be productive and sometimes push boundaries," she says. She has already reached out to more people to be on the show.

With plenty of energy and excitement, the hosts of Block Period have big plans for the rest of the year. Their next show will be a culmination of the summer. As Partridge notes, with this group of seniors, "The only disadvantage is that they're leaving soon."

Block Period is on Twitter and Instagram @plockberiod and on Facebook at "Takoma Radio: Block Period." The show airs every Friday night from 10 to 11:30 p.m. on 94.3 FM WOWD-LP